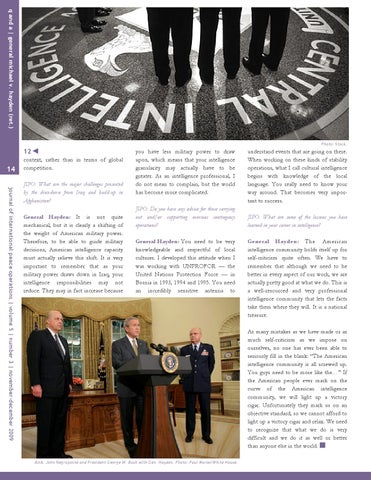 JIPO: What are the major challenges presented by the drawdown from Iraq and build-up in Afghanistan? General Hayden: It is not quite mechanical, but it is clearly a shifting of the weight of American military power. Therefore, to be able to guide military decisions, American intelligence capacity must actually relieve this shift. It is very important to remember that as your military power draws down in Iraq, your intelligence responsibilities may not reduce. They may in fact increase because

you have less military power to draw upon, which means that your intelligence granularity may actually have to be greater. As an intelligence professional, I do not mean to complain, but the world has become more complicated. JIPO: Do you have any advice for those carrying out and/or supporting overseas contingency operations? General Hayden: You need to be very knowledgeable and respectful of local cultures. I developed this attitude when I was working with UNPROFOR — the United Nations Protection Force — in Bosnia in 1993, 1994 and 1995. You need an incredibly sensitive antenna to

understand events that are going on there. When working on these kinds of stability operations, what I call cultural intelligence begins with knowledge of the local language. You really need to know your way around. That becomes very important to success. JIPO: What are some of the lessons you have learned in your career in intelligence? General Hayden: The American intelligence community holds itself up for self-criticism quite often. We have to remember that although we need to be better in every aspect of our work, we are actually pretty good at what we do. This is a well-resourced and very professional intelligence community that lets the facts take them where they will. It is a national treasure. As many mistakes as we have made or as much self-criticism as we impose on ourselves, no one has ever been able to seriously fill in the blank: “The American intelligence community is all screwed up. You guys need to be more like the…” If the American people ever mark on the curve of the American intelligence community, we will light up a victory cigar. Unfortunately they mark us on an objective standard, so we cannot afford to light up a victory cigar and relax. We need to recognize that what we do is very difficult and we do it as well or better than anyone else in the world. 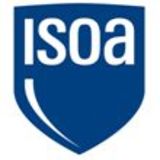