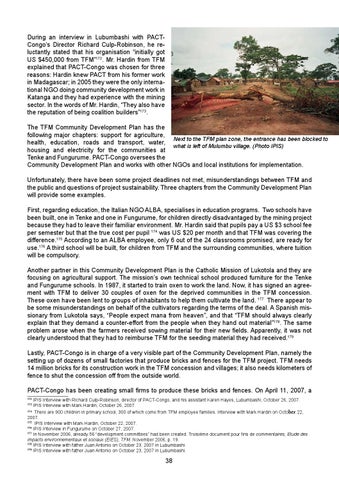 During an interview in Lubumbashi with PACTCongo’s Director Richard Culp-Robinson, he reluctantly stated that his organisation “initially got US $450,000 from TFM”172. Mr. Hardin from TFM explained that PACT-Congo was chosen for three reasons: Hardin knew PACT from his former work in Madagascar; in 2005 they were the only international NGO doing community development work in Katanga and they had experience with the mining sector. In the words of Mr. Hardin, “They also have the reputation of being coalition builders”173. The TFM Community Development Plan has the following major chapters: support for agriculture, Next to the TFM plan zone, the entrance has been blocked to health, education, roads and transport, water, what is left of Mulumbu village. (Photo IPIS) housing and electricity for the communities at Tenke and Fungurume. PACT-Congo oversees the Community Development Plan and works with other NGOs and local institutions for implementation. Unfortunately, there have been some project deadlines not met, misunderstandings between TFM and the public and questions of project sustainability. Three chapters from the Community Development Plan will provide some examples. First, regarding education, the Italian NGO ALBA, specialises in education programs. Two schools have been built, one in Tenke and one in Fungurume, for children directly disadvantaged by the mining project because they had to leave their familiar environment. Mr. Hardin said that pupils pay a US $3 school fee per semester but that the true cost per pupil 174 was US $20 per month and that TFM was covering the difference.175 According to an ALBA employee, only 6 out of the 24 classrooms promised, are ready for use.176 A third school will be built, for children from TFM and the surrounding communities, where tuition will be compulsory. Another partner in this Community Development Plan is the Catholic Mission of Lukotola and they are focusing on agricultural support. The mission’s own technical school produced furniture for the Tenke and Fungurume schools. In 1987, it started to train oxen to work the land. Now, it has signed an agreement with TFM to deliver 30 couples of oxen for the deprived communities in the TFM concession. These oxen have been lent to groups of inhabitants to help them cultivate the land. 177 There appear to be some misunderstandings on behalf of the cultivators regarding the terms of the deal. A Spanish missionary from Lukotola says, “People expect mana from heaven”, and that “TFM should always clearly explain that they demand a counter-effort from the people when they hand out material”178. The same problem arose when the farmers received sowing material for their new fields. Apparently, it was not clearly understood that they had to reimburse TFM for the seeding material they had received.179 Lastly, PACT-Congo is in charge of a very visible part of the Community Development Plan, namely the setting up of dozens of small factories that produce bricks and fences for the TFM project. TFM needs 14 million bricks for its construction work in the TFM concession and villages; it also needs kilometers of fence to shut the concession off from the outside world. PACT-Congo has been creating small firms to produce these bricks and fences. On April 11, 2007, a IPIS Interview with Richard Culp-Robinson, director of PACT-Congo, and his assistant Karen Hayes, Lubumbashi, October 26, 2007. IPIS Interview with Mark Hardin, October 26, 2007. 174 There are 900 children in primary school, 300 of which come from TFM employee families. Interview with Mark Hardin on October 22, 2007. 175 IPIS Interview with Mark Hardin, October 22, 2007. 176 IPIS Interview in Fungurume on October 27, 2007. 177 In November 2006, already 56 “development committees” had been created. Troisième document pour fins de commentaires, Etude des impacts environnementaux et sociaux (EIES), TFM. November 2006, p. 19. 178 IPIS Interview with father Juan Antonio on October 23, 2007 in Lubumbashi. 179 IPIS Interview with father Juan Antonio on October 23, 2007 in Lubumbashi. 172 173 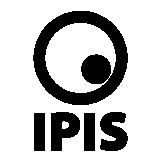