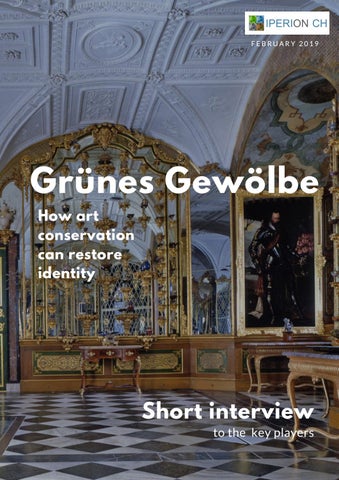 to the key players

Bombed and razed to the ground during

(Hall of the Precious Objects).

long and careful reconstruction work. After

On February 13,1945, the Residenzschloss was almost

the reunification of Germany in 1990 it

completely destroyed during the bombing of

received further impetus. Some important buildings have been reconstructed as they were and art collections were recovered and relocated to their original locations. One of the most interesting examples of this reconstruction process is the Grünes Gewölbe, the museum that contains one of the largest collection of treasures made of such materials as silver, gold, rock crystal and precious stones. The museum was originally located in eight rooms of the ground floor in the west wing of the Dresden Residenzschloss (residential palace). It was gradually established by August der Starke between 1723 and 1729 to hold the extensive collection of treasures as well as the Saxon crown jewels. The name of the museum is due to some green architectural

Could you tell us more about how the Grünes

It is quite curious that Dresden is known as the

Gewölbe project, that dealt with paints on silver,

Florence of Elbe: the two European cities have

much in common from a cultural heritage point of view. Thanks to the IPERION CH project the

In addition to locations such as in Florence, Vienna

scientists of the two cities met to face together the

and Munich, the Grünes Gewölbe at the Staatliche

objects. Could you tell us about the cultural

holds one of the most outstanding princely

exchange with the scientists at the Opificio delle

Pietre Dure (OPD) in Florence and what results did

Since January 2014 a large-scale project entitled

The focus of the exchange was to compare the

Prestige” has been dealing with several aspects of

possibilities and limits of the analytical methods

courtly silver. It has been possible by the generous

(such as non-invasive methods or micro-invasive

support of the Fritz Thyssen Foundation. A central

techniques when cross sections are analyzed, such

topic is the embellishing polychrome paint, which is

preserved on many silver objects in the Grünes

Gewölbe. For the first time, this topic has been the

and Florence, the results were comparable very well.

subject of extensive research. With an

For example a detail was found in Dresden with

interdisciplinary approach in cooperation with art

historians, conservators and chemists, the different

detected within the varnish and the paint layer. A

aspects of this fascinating topic has been outlined.

closer look at the cross-sections in

All analytical work has been done in cooperation

the OPD uncovered that this phenomenon was

with the Archaeometry Laboratory at the

traced in the Florence samples as well.

The archival filings of embedded cross-sections of samples are comparable and have stood the test of time in both laboratories. Any of the samples stored,

What was one of the most unexpected discoveries

even those dating back to the 1960´s, can be easily

traced for re-investigation with modern methods. We learned about an improved FTIR-spectrometer of

With the help of written documents and historical

the OPD which was specifically designed by our

Italian colleagues. This improvement will be of great

it was possible to find some hints or even to provide

benefit for Dresden, because we can implement it

evidence, that many objects, which have a

to be able to perform analyses on a wider range of

Could you express in less than 10 words your scientific opinion about..

What is IPERION CH? IPERION CH is a project funded by the European Commission under GA 654028. It aims at establishing a distributed RI with a sustainable plan of activities, including offering access to a wide range of high-level scientific instruments, methodologies, data and tools for advancing knowledge and innovation in the preservation of Cultural Heritage. IPERION CH connects researchers in the Humanities and Natural Sciences and fosters a trans-disciplinary culture of exchange and cooperation for the growth of the European Research Area. IPERION CH offers Transnational Access (TNA) to its world-class laboratories and knowledge distributed in 11 countries with the submission of single or multitechnique proposals. IPERION CH selects the best proposals and covers the costs of this activity. The TNA program offers a vast portfolio of services and activities centred on the needs of the heritage science community in Europe and Associated Countries. The combined activity promotes the development of advanced research in the examination and conservation of works of art, offering users the access to unique European resources for in situ and laboratory investigations on artwork materials through three TNA platforms: FIXLAB, ARCHLAB and MOLAB. Through the three programs of access, the project aims to deliver to the users (from experienced practitioners to primary users) not only experimental resources but also methodological approaches, compliant best practices, tools and technologies to permit them to carry out their projects in conditions otherwise impossible for them. The access is offered to: 1. Archives in European museums or conservation institutes (ARCHLAB); 2. Advanced mobile analytical instrumentations for in-situ non-invasive measurements (MOLAB); 3. Integrated platforms where large scale facilities are coupled with medium scale installations (FIXLAB).

The Integrated Platform for the European Research Infrastructure ON Culture Heritage IPERION CH launches calls for proposals twice a year. Discover how to participate in the IPERION CH website.

Rainer Richter, Ulrike Weinhold and their coworkers presented the proposal "Polychrome paint on European precious silver objects. A merging of two independent research studies of a scarcely noticed colouring technique" to IPERION CH and they access to the OPD archives in 2017.

Read the ARCHLAB report in the IPERION CH website (www.iperionch.eu)

The records of all the activities developed to date by the Opificio delle Pietre Dure are collected in three different archives, located in central Florence: 1. the Historical Archive which contains all the documentation on the history of the Opificio till the 70’s 2. the Conservation Archive related to the conservation/restoration works since 1975 3. the Scientific Data Archive, founded in 1977 by its former Director Mauro Matteini. The language used in all these three archives is Italian. The records held by the archives refer to a wide range of objects related to the Conservation Departments activities: stone and wood sculpture, bronzes, tapestries and textiles, ceramics, wax and glass, paper, movable paintings, wall paintings, jewellery, mosaics, mainly from Middle Ages to present times. Access is offered to: - conservation reports - primary images - analytical data - sample collection - mostly relating to the conservation works performed by the OPD. 1. The Historical Archive: records held in the Historical Archive refer to the Opificio delle Pietre Dure activity from 1789 to 1970 and follow the transformation of the Institute from a workshop belonging to the Granduke (1789-1860) to the new set-up at the beginning of 20th century when, beside the production of “commesso” objects, restoration activity started to be undertaken. 2. The Conservation Archive: 12.600 records associated with OPD conservation works since 1975 are held in this archive. It includes different format images and records, only partially digitized. Beside normal photos, special recording technique images are included, as micro- and macro-images, raking light photos, UV photos, X-radiographs, etc. Images are provided to the user in analogue or digital form and their use is subjected to the current national laws (Ronchey law). 3. The Scientific Archive: the scientific archive collects the diagnostic results related to the restoration works performed by the Opificio from 1977 to nowadays (S files) and to other research projects. Records include an introductory part in which the identifying data of the artwork, the aim of the investigation and the analytical techniques used, are reported. In the following part, for every collected sample, a photographic documentation (sampling site and sample) and the analytical results are shown. The oldest files contain essentially analysis by optical microscope on cross sections. Later reports also contain results of AAS, FTIR, µFTIR, SEM/EDS, XRF and CI analyses. The techniques used vary according to the investigation needs. At the moment more than 2000 records are stored in the archive. Most of the oldest part of the data and images in records are only in analog form, the most recent are in digital form. Since 2002 the photographic documentation has been collected directly in digital form. Since the end of 2004 the diagnostic activity reports for each artwork is stored only in digital form. However, the whole archive is currently being digitalized. A wide collection of about 9000 cross- sections coming from different artworks is also available under request. The use of unpublished data of the Scientific Archive is subjected to an agreement with the referent of the archive. AN INTERVIEW WITH RAINER RICHTER AND ULRIKE WEINHOLD

AN INTERVIEW WITH RAINER RICHTER AND ULRIKE WEINHOLD