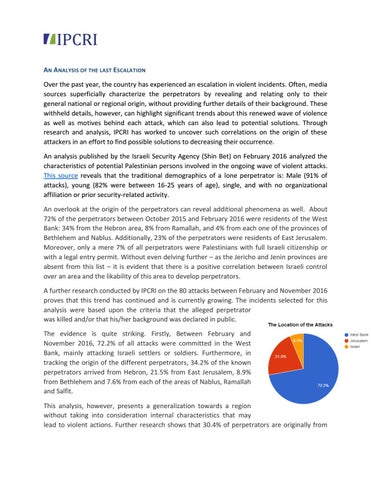 AN ANALYSIS OF THE LAST E SCALATION Over the past year, the country has experienced an escalation in violent incidents. Often, media sources superficially characterize the perpetrators by revealing and relating only to their general national or regional origin, without providing further details of their background. These withheld details, however, can highlight significant trends about this renewed wave of violence as well as motives behind each attack, which can also lead to potential solutions. Through research and analysis, IPCRI has worked to uncover such correlations on the origin of these attackers in an effort to find possible solutions to decreasing their occurrence. An analysis published by the Israeli Security Agency (Shin Bet) on February 2016 analyzed the characteristics of potential Palestinian persons involved in the ongoing wave of violent attacks. This source reveals that the traditional demographics of a lone perpetrator is: Male (91% of attacks), young (82% were between 16-25 years of age), single, and with no organizational affiliation or prior security-related activity. An overlook at the origin of the perpetrators can reveal additional phenomena as well. About 72% of the perpetrators between October 2015 and February 2016 were residents of the West Bank: 34% from the Hebron area, 8% from Ramallah, and 4% from each one of the provinces of Bethlehem and Nablus. Additionally, 23% of the perpetrators were residents of East Jerusalem. Moreover, only a mere 7% of all perpetrators were Palestinians with full Israeli citizenship or with a legal entry permit. Without even delving further â&#x20AC;&#x201C; as the Jericho and Jenin provinces are absent from this list â&#x20AC;&#x201C; it is evident that there is a positive correlation between Israeli control over an area and the likability of this area to develop perpetrators. A further research conducted by IPCRI on the 80 attacks between February and November 2016 proves that this trend has continued and is currently growing. The incidents selected for this analysis were based upon the criteria that the alleged perpetrator was killed and/or that his/her background was declared in public. The evidence is quite striking. Firstly, Between February and November 2016, 72.2% of all attacks were committed in the West Bank, mainly attacking Israeli settlers or soldiers. Furthermore, in tracking the origin of the different perpetrators, 34.2% of the known perpetrators arrived from Hebron, 21.5% from East Jerusalem, 8.9% from Bethlehem and 7.6% from each of the areas of Nablus, Ramallah and Salfit. This analysis, however, presents a generalization towards a region without taking into consideration internal characteristics that may lead to violent actions. Further research shows that 30.4% of perpetrators are originally from

villages located at Area C, which is fully controlled by the Israeli army and is the home of less than o.2 million Palestinians. This area is known for paying the price of the expansion of settlements and is often the primary location of violent clashes between the two communities. Furthermore, almost 23% of perpetrators are originally from area H1 of Hebron and only 19% of the alleged perpetrators arrive from area A, which is under the control of the PA and is the primary residence of the majority of the Palestinian population, estimated at more than 2.5 million. This leads to the conclusion that there is a higher probability of a perpetrator to arrive from a village controlled by Israel and is in a land dispute with Jewish settlements than from the center of Palestinians cities such as Ramallah, Jericho or Bethlehem (none of the attackers arrived from the centers of those cities). According to the UN Office for the Coordination of Humanitarian Affairs, 60% of the West Bank is Area C, where Israel retains primary control. Over 20% of its communities have limited access to health services, many are forced to pay 400% more for water since they are not connected to a water network, and less than 1% of Area C has been planned for Palestinian development. There has been a marked increase in demolition in Area C over the last 5 years, some of which targeted schools, and 70% of the area is off-limits to Palestinian construction, meaning little hope for land rehabilitation. Hebron is not faring much better. The city has constantly faced road closures, clashes with ever-growing Israeli settlements nearby, and tensions between the residents and Israeli forces. An increasing number of settlements in the area has led to a rise in security measures, risk of evictions, and restrictions on Palestinian access. These conditions have created a prime environment for residents to strike out due to frustration and hopelessness as living conditions continue to worsen, and as we see in this analysis, 53.4% of the perpetrators arrive from Area C or Hebron. Together with the acknowledgment that every day dozens of thousands of Palestinians cross to Israel for economic purposes but at large are not involved in violent incidents, we may conclude that there is a correlation between the level of political rights, movement and economic opportunities and the probability of initiating violent actions.

Even among the Jerusalemite perpetrators, we see the same trend. Almost 18% of the total culprits are originally from Jerusalem, but none of these attackers originate from the center of the city or from upper middle class neighborhoods. Jerusalemites involved in violent incidents are largely from Kufr ‘Aqab and Isawiya, while fewer are from Abu Dis, Silwan, Um Tuba, Walaje or Jabl Mukaber. Similar to Area C, these neighborhoods suffer from ongoing clashes with the Israeli security forces and are located adjacent to the wall or in disputed land. Furthermore, while some are excluded fully from municipal services (as is the case for Kufr ‘Aqab) others suffer from the lack of construction permits, population density or extreme poverty (as in the case of Isawiya and Jabl Mukaber). As none of the alleged attackers over the past year arrived from the big Jerusalemite neighborhoods of Beit Hanina, Beit Tsafafa or Sheikh Jarrah, despite the fact that those areas have easier access to Jewish areas, this once again provides a correlation between the level of land disputes a certain place has and its likelihood of creating perpetrators. The earlier Shin Bet analysis states that the motivation of the perpetrators is derived from a sense of national, economic, personal and gender-based (seven of the perpetrators were women) discrimination. These attacks were seen as a means of “escaping a hopeless situation that, in their view, cannot be changed”. In addition to this discrimination, our research concludes that the majority of the alleged perpetrators arrive from areas that are under Israeli control, suffer regularly from clashes resulting from the conflict and often do not have access to basic services because of their disputed status. Thus, the reality that bring perpetrators to initiate violence can be mended not only by security measures or collective punishments, but alternatively through an investment in social issues, economic growth, and most importantly in the provision of political rights. Such actions can include first, a significant increase in the quantity of work permits to answer the Palestinian growing unemployment or to offer new types of permits that are beyond the regular blue collar jobs. Secondly, reforms of the Paris Protocol and the development of Allenby Bridge can surge the local trade and provide more sources of income to the Palestinian economy. Thirdly, provision of construction permits in both East Jerusalem and Area C can decrease local housing density and offer the development of new industries and basic infrastructure necessary for Palestinian development. And lastly, providing political rights such as movement, security and self-determination to the residents of Area C, at least as those granted to the residents of Area A or East Jerusalem, may decrease the violent incidents rather than increase the risk, as it is often thought in Israel. Such improvement would not be only moral and just but can now be soundly supported with research and data as a measure for increasing the overall security. 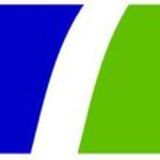 Ipcri Analysis of the November 2016 Escalation

Ipcri Analysis of the November 2016 Escalation