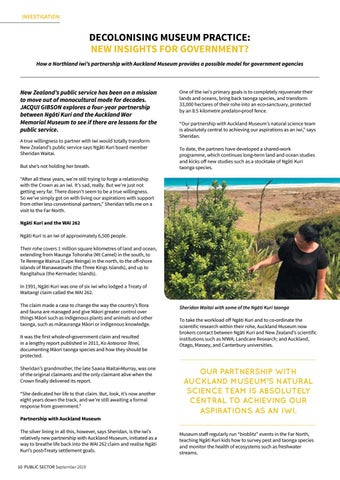 One of the iwi’s primary goals is to completely rejuvenate their lands and oceans, bring back taonga species, and transform 33,000 hectares of their rohe into an eco-sanctuary, protected by an 8.5 kilometre predator-proof fence. “Our partnership with Auckland Museum’s natural science team is absolutely central to achieving our aspirations as an iwi,” says Sheridan. To date, the partners have developed a shared-work programme, which continues long-term land and ocean studies and kicks off new studies such as a stocktake of Ngāti Kuri taonga species.

“After all these years, we’re still trying to forge a relationship with the Crown as an iwi. It’s sad, really. But we’re just not getting very far. There doesn’t seem to be a true willingness. So we’ve simply got on with living our aspirations with support from other less conventional partners,” Sheridan tells me on a visit to the Far North. Ngāti Kuri and the WAI 262 Ngāti Kuri is an iwi of approximately 6,500 people. Their rohe covers 1 million square kilometres of land and ocean, extending from Maunga Tohoraha (Mt Camel) in the south, to Te Rerenga Wairua (Cape Reinga) in the north, to the off-shore islands of Manawatawhi (the Three Kings Islands), and up to Rangitahua (the Kermadec Islands). In 1991, Ngāti Kuri was one of six iwi who lodged a Treaty of Waitangi claim called the WAI 262. The claim made a case to change the way the country’s flora and fauna are managed and give Māori greater control over things Māori such as indigenous plants and animals and other taonga, such as mātauranga Māori or indigenous knowledge. It was the first whole-of-government claim and resulted in a lengthy report published in 2011, Ko Aotearoa Tēnei, documenting Māori taonga species and how they should be protected. Sheridan’s grandmother, the late Saana Waitai-Murray, was one of the original claimants and the only claimant alive when the Crown finally delivered its report. “She dedicated her life to that claim. But, look, it’s now another eight years down the track, and we’re still awaiting a formal response from government.” Partnership with Auckland Museum The silver lining in all this, however, says Sheridan, is the iwi’s relatively new partnership with Auckland Museum, initiated as a way to breathe life back into the WAI 262 claim and realise Ngāti Kuri’s post-Treaty settlement goals. 10 PUBLIC SECTOR September 2019

Journal of the Institute of Public Administration New Zealand