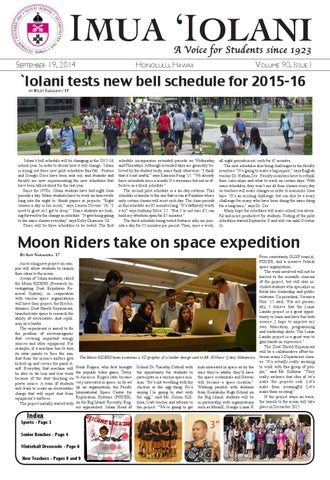 A Voice for Students since 1923

`Iolani’s bell schedule will be changing in the 2015-16 school year. In order to decide how it will change, `Iolani is trying out three new pilot schedules this fall. Posters and Google Docs have been sent out, and students and faculty are now experimenting the new schedules that have been talked about for the last year. Since the 1970s, `Iolani students have had eight class periods a day. Many students have to work on homework long into the night to finish papers or projects. “Eight classes a day is too much,” says Lauren Devens ’18, “I need to grow so I got to sleep.” Some students are looking forward to the change in schedule. “It gets tiring going to the same classes everyday” says Kelly Okamura ’18. There will be three schedules to be tested. The first

schedule incorporates extended periods on Wednesday and Thursdays. Although extended days are generally beloved by the student body, some think otherwise. “I think that it’s not useful,” says Kamerin Fong ’15. “We already have extendeds once a month. It’s awesome but not as effective as a block schedule.” The second pilot schedule is a six-day rotation. This schedule is similar to the one that is run at Punahou where only certain classes will meet each day. The class periods in this schedule are 85 minutes long. “It’s definitely worth a try” says Anthony Silva ’15. “But, I’m not sure if I can hold my attention span for 85 minutes.” The third schedule being tested features only six periods a day for 55 minutes per period. Then, once a week,

all eight periods meet, each for 45 minutes. The new schedules also bring challenges to the faculty members. “It’s going to make a big impact,” says English teacher Dr. Nathan Zee. Faculty members have to rethink their curriculum and what to teach on certain days. With some schedules, they won’t see all their classes every day so teachers will make changes in order to maximize class time. “It’s an exciting challenge, but can also be a scary challenge for many who have been doing the same thing for a long time,” says Dr. Zee. Many hope the schedules will make school less stressful and more productive for students. Testing of the pilot schedules started September 8 and will run until October 31.

An exciting new project on campus will allow students to launch their ideas to the moon. A team of ‘Iolani students, called the Moon RIDERS (Research Investigating Dust Expulsion Removal System), in cooperation with various space organizations will have their project, the Electrodynamic Dust Shield Experiment, launched into space to research the ability of electrostatic dust repulsion on a lander. The experiment is aimed to fix the problem of electromagnetic dust covering important energy sources and other equipment. For example, if a machine has to turn its solar panels to face the sun, dust from the moon’s surface gets kicked up and covers the panel itself. Everyday, that machine will be able to do less and less work because of the dust blocking its power source. A team of students will work to create an electrostatic charge that will expel dust from equipment’s surfaces. The project initially started with

School Dr. Timothy Cottrell with the opportunity for students to participate in a serious space mission. “He’s not wrestling with the chicken or the egg thing. He’s saying I’m going to start with the egg,” said Mr. Gilson Killhour, I-lab teacher and advisor to the project. “We’re going to get

kids interested in space so by the time they’re adults, they’ll have the space credentials and Hawaii will become a space location.” Working parallel with students from Kealakehe High School on the Big Island, students will be in partnership with organizations such as MoonX, Google Lunar X

Prize contestants, GLXP team(s), PISCES, and a massive federal space organization. The work involved will not be limited to the scientific element of the project, but will also included students who specialize in fields like leadership and public relations. Co-president, Veronica Shei ’15 said, “For me personally, I believe that the Lunar Lander project is a great opportunity to learn and have fun with science. I hope to improve my own fabrication, programming and leadership skills. The Lunar Lander project is a great way to gain hands on experience.” The Dust Shield Experiment will be a collaborative effort between many I-Department classes. “It’s actually really amazing to work with this group of people,” said Mr. Killhour. “They really embrace that idea of let’s make the projects real. Let’s make them meaningful. Let’s make them exciting.” If the project stays on track, the launch to the moon will take place in December 2015.