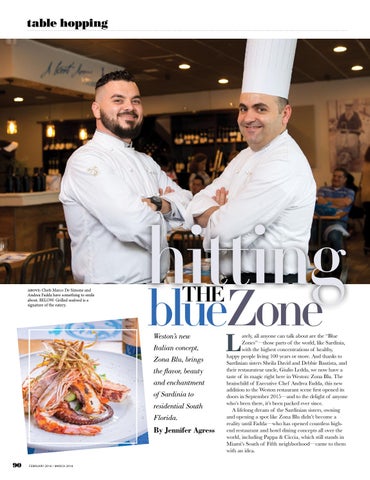 ABOVE: Chefs Marco De Simone and

Andrea Fadda have something to smile about. BELOW: Grilled seafood is a signature of the eatery.

ately, all anyone can talk about are the “Blue Zones”—those parts of the world, like Sardinia, with the highest concentrations of healthy, happy people living 100 years or more. And thanks to Sardinian sisters Sheila David and Debbie Bautista, and their restaurateur uncle, Giulio Ledda, we now have a taste of its magic right here in Weston: Zona Blu. The brainchild of Executive Chef Andrea Fadda, this new addition to the Weston restaurant scene first opened its doors in September 2015—and to the delight of anyone who’s been there, it’s been packed ever since. A lifelong dream of the Sardinian sisters, owning and opening a spot like Zona Blu didn’t become a reality until Fadda—who has opened countless highend restaurant and hotel dining concepts all over the world, including Pappa & Ciccia, which still stands in Miami’s South of Fifth neighborhood—came to them with an idea. 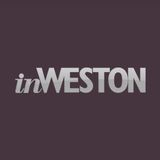