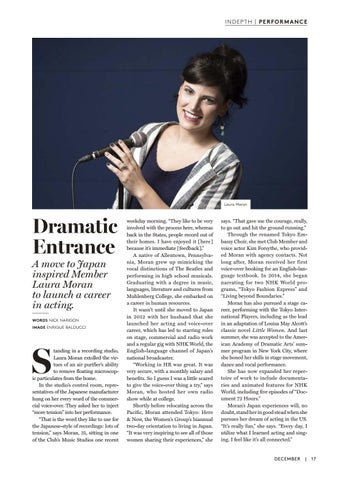 tanding in a recording studio, Laura Moran extolled the virtues of an air purifier’s ability to remove floating microscopic particulates from the home. In the studio’s control room, representatives of the Japanese manufacturer hung on her every word of the commercial voice-over. They asked her to inject “more tension” into her performance. “That is the word they like to use for the Japanese-style of recordings: lots of tension,” says Moran, 31, sitting in one of the Club’s Music Studios one recent

weekday morning. “They like to be very involved with the process here, whereas back in the States, people record out of their homes. I have enjoyed it [here] because it’s immediate [feedback].” A native of Allentown, Pennsylvania, Moran grew up mimicking the vocal distinctions of The Beatles and performing in high school musicals. Graduating with a degree in music, languages, literature and cultures from Muhlenberg College, she embarked on a career in human resources. It wasn’t until she moved to Japan in 2012 with her husband that she launched her acting and voice-over career, which has led to starring roles on stage, commercial and radio work and a regular gig with NHK World, the English-language channel of Japan’s national broadcaster. “Working in HR was great. It was very secure, with a monthly salary and benefits. So I guess I was a little scared to give the voice-over thing a try,” says Moran, who hosted her own radio show while at college. Shortly before relocating across the Pacific, Moran attended Tokyo: Here &amp; Now, the Women’s Group’s biannual two-day orientation to living in Japan. “It was very inspiring to see all of those women sharing their experiences,” she

says. “That gave me the courage, really, to go out and hit the ground running.” Through the renamed Tokyo Embassy Choir, she met Club Member and voice actor Kim Forsythe, who provided Moran with agency contacts. Not long after, Moran received her first voice-over booking for an English-language textbook. In 2014, she began narrating for two NHK World programs, “Tokyo Fashion Express” and “Living beyond Boundaries.” Moran has also pursued a stage career, performing with the Tokyo International Players, including as the lead in an adaptation of Louisa May Alcott’s classic novel Little Women. And last summer, she was accepted to the American Academy of Dramatic Arts’ summer program in New York City, where she honed her skills in stage movement, dance and vocal performance. She has now expanded her repertoire of work to include documentaries and animated features for NHK World, including five episodes of “Document 72 Hours.” Moran’s Japan experiences will, no doubt, stand her in good stead when she pursues her dream of acting in the US. “It’s really fun,” she says. “Every day, I utilize what I learned acting and singing. I feel like it’s all connected.” 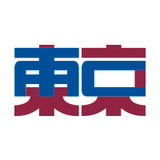