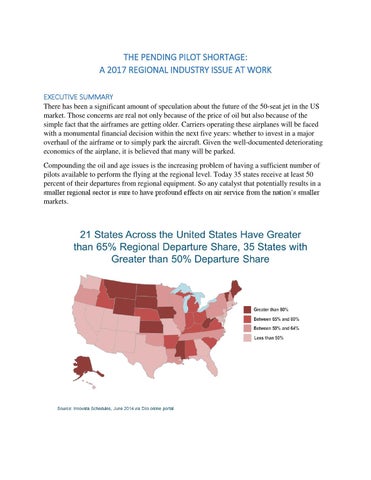 THE PENDING PILOT SHORTAGE: A 2017 REGIONAL INDUSTRY ISSUE AT WORK EXECUTIVE SUMMARY There has been a significant amount of speculation about the future of the 50-seat jet in the US market. Those concerns are real not only because of the price of oil but also because of the simple fact that the airframes are getting older. Carriers operating these airplanes will be faced with a monumental financial decision within the next five years: whether to invest in a major overhaul of the airframe or to simply park the aircraft. Given the well-documented deteriorating economics of the airplane, it is believed that many will be parked. Compounding the oil and age issues is the increasing problem of having a sufficient number of pilots available to perform the flying at the regional level. Today 35 states receive at least 50 percent of their departures from regional equipment. So any catalyst that potentially results in a smaller regional sector is sure to have profound effects on air service from the nationâ&#x20AC;&#x2122;s smaller markets.

Essential Air Service (EAS) providers Great Lakes and Silver are feeling the pinch today. The Great Lakes story increasingly grows. The company had 304 pilots in February 2013 and today that number is 78. Earlier this week, Silver announced a $12,000 bonus for any new first officer that joins the company. It only makes sense that the lowest paid pilots leave for better career opportunities first. This is playing out among the EAS carriers. Now, even the larger regional airlines are feeling the pinch as well. ExpressJet is suffering from a pilot shortfall. Republic Airways announced it would park 27 50-seat units because of a shortage. American Eagle has struggled to fill training classes in order to compensate for the loss of its pilots to mainline carriers where pay and lifestyle are much better. Based on pilot retirements at the four largest US carriers (American, Delta, Southwest and United), 14,000 aviators will be needed at those airlines by 2022 just to continue providing the same level of flying as today. Spirit and jetBlue are growing and they will need to hire pilots as well. And if the regional industry is to be the primary supply for pilot labor to the network carriers, there are only 18,000 pilots within the sector. If replacing retiring mainline pilots is first and foremost, then the regional industry will be but a fraction of itself by 2022. Of course new pilots will be trained and will mitigate some of the concern, but hardly all.

INTRODUCTION One of the more underappreciated happenings in the US domestic airline industry is taking place within the regional sector: a pending pilot shortage. The story is starting to get some press coverage. A sample of recent headlines include: “United Continental to Downsize Cleveland Hub,” “Airline Pilot Shortage Hits Early,” and “Pilot Shortage Hits Regional Carrier Republic.” This is simply the beginning of a story that will play out at least through 2022. It has started by impacting carriers like Great Lakes and Silver that are flying turboprops predominantly within the Essential Air Service Program. However no one is immune as evidenced by the headlines above. Currently within the contiguous 48 states, 265 airports have more than 90 percent of their flying supplied by regional carriers. That is important to note because it is the relatively low wages and limited work rules that pilots work under in the regional sector that work to make being a licensed commercial pilot unattractive from a financial perspective. A starting pilot will make in the area of $24,000 the first year with a regional carrier. Hardly a sum to aspire to after investing upwards of $150,000 to complete training and performing 1,500 hours of flying.

The operational issues are simply that there are no aircraft in production with less than 50 seats. The fact is that the smallest aircraft that make financial sense in a high oil environment is 100 seats or more. While there are many communities that can support a 100 seat platform, there are more that cannot. Large propeller equipment have not proven to be the answer either. Currently the 76-seat regional aircraft is beginning to replace 50-seat aircraft that are being removed from service. While an improvement in the quality of equipment, the replacement often is made with reduced frequency in many airport markets. A strategic issue has been at work since July of 2008 when oil peaked at nearly $148 per barrel. The fact that the largest US domestic carriers are not growing capacity in line with GDP is a sea change from prior airline management thinking. This capacity constraint along with industry consolidation are having profound effects on air service at airports of all sizes albeit a disproportionate effect on the nationâ&#x20AC;&#x2122;s smaller markets. The other strategic issue has been at play for decades and that is the presence of low cost carrier service at an alternative airport within the catchment area of the hometown airport. This strategy has been widely employed by Southwest and others and simply makes the highway the first access point to the air transportation grid for many.

The economic issues at work that are undermining air service to small markets lie with the price of oil. With the jet fuel equivalent price above $100 per barrel, the economics of small jet service whether 37 seats, 44 seats or 50 seats simply deteriorate. As a result, we are seeing the network airlines not commit to purchasing all of the capacity that they had purchased prior to the oil spike because of these flagging economics. Finally there are three legislative/regulatory changes that have a profound impact on the number of pilots required to perform a certain level of flying. The 110th Congress passed a law that extended a pilots career from age 60 to 65. It used to be that pilots were forced to retire at age 60. Then in response to the Colgan crash in Buffalo, NY, the hours required for a pilot to get his/her Air Transport Pilot (ATP) rating was increased from 250 hours to 1,500. Then the FAA, after years of study, put forth new regulations regarding crew rest. The new regulations simply require an airline to hire more people to do the same level of flying as yesterday. The age 65 rule by itself does not impact the number of pilots needed per se. However, there are now a significant number of pilots that are facing mandatory retirement at the network carriers and this will have a weighty impact on the number of replacement pilots needed going forward. Between 2015 and 2022 more than 14,000 pilots are expected to retire from the Big 4 airlines alone. At a minimum then, 14,000 pilots will need to be hired just to retain todayâ&#x20AC;&#x2122;s level of flying at American, Delta, United and Southwest. This does not take into account growth at Spirit, Frontier, Allegiant and other potential operators. Assuming that todayâ&#x20AC;&#x2122;s regional pool of pilots will be the primary source to supply those pilots to the mainline carriers, demand would virtually surpass the 18,000 aviators flying for regional airlines today.

Assuming that todayâ&#x20AC;&#x2122;s regional industry is the sole supply source for pilot labor is to paint this scenario as worst case â&#x20AC;&#x201C; and it does. It is rather intended to put into context the structural issue that airports face going forward. While we know that 50-seat units are being replaced by 76-seat units, it is not a one-for-one swap. A worst case scenario could see an average of 200 units of flying be removed from the regional sector each year between 2015 and 2022. Another structural issue that will have some impact on small jet flying is the simple fact that the 50-seat airframes are getting old. It is a rule of thumb that 40,000 cycles is the maximum number before either retiring the airplane or performing a very expensive overhaul. Given that the economics of the small jets are challenged today, there is a high probability that the airframes will be parked rather than overhauled.

SHORT-TERM ISSUES A number of regional pilot groups have been in negotiations with their respective companies seeking to improve their wages and working conditions. The first group to reach a tentative agreement were the ExpressJet pilots. The membership then chose to vote down the agreement. ExpressJet is one of the regional airlines suffering from an insufficient number of pilots to fulfill the flying the company had contracted to perform. One of the reasons that United cited for shutting down its Cleveland hub was a shortage of pilots to perform the flying. Then American Airlines and its American Eagle subsidiary pilots reached a tentative agreement that was rejected by the membership. A subsequent tentative agreement was also voted down by the membership. The company suggested that if the pilots chose to vote down the latest agreement it would begin the process of a controlled liquidation of American Eagle. It is believed that this is more than a threat and therefore it is expected that Eagle will get smaller in the immediate term with the ERJ 140 and 145 aircraft being phased out sooner rather than later given their poor economics. There are 12 communities served exclusively by American Eagle with ERJ 140/145 equipment. An additional four communities are served exclusively by American with 50-seat and less aircraft.

Finally, on April 4 the Republic Airways pilots will vote on a tentative agreement recently reached with the company. Republic recently announced that it will park 27 50-seat aircraft because of a shortage of airmen. Whereas it is expected that ExpressJet and American Eagle will realize above average attrition as a result of the votes, a no vote at Republic will have some impact but not nearly as damaging as that expected at the other two carriers. 7

CONCLUDING THOUGHTS Is the pilot shortage issue acute? Yes it is important and one to watch. Is it a 2015 problem? There will be some fallout in terms of reduced frequencies, but very little in terms of markets vacated. The industry should be able to manage along these lines for the next three years. By 2017, mainline pilot retirements alone could cause up to 500 units of flying to be lost. This is where there will be pain as it will increasingly be more and more difficult to maintain a competitive presence in all markets served today. Some tough decisions will have to be made as to what markets to retain and which markets to exit. Even if the industry were to make new hire economics attractive to young aviators coming out of school, it will be at least four years before they have sufficient time in the cockpit in order to qualify for their Air Transport Pilot license. It does not fix the short-term issue before the industry today. This is an industry issue for multiple stakeholders. The scenario that has been painted is worst case in that it does not assume new aviators choosing a piloting career as a profession. But the scenario also does not assume pilots necessary for growth whether among the network carriers or the low fare carriers. A fundamental fear is that as a result of the above, the mainline carriers will make a decision that smaller market flying is no longer part of their core business. A meaningful probability can be assigned to this scenario. If this is the case, then a total re-think and re-draw of the air service map will prove necessary. An InterVISTAS white paper on the pilot shortage

An InterVISTAS white paper on the pilot shortage