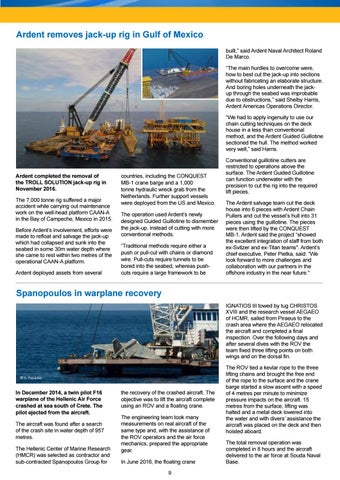 Ardent removes jack-up rig in Gulf of Mexico built,” said Ardent Naval Architect Roland De Marco. “The main hurdles to overcome were, how to best cut the jack-up into sections without fabricating an elaborate structure. And boring holes underneath the jackup through the seabed was improbable due to obstructions,” said Shelby Harris, Ardent Americas Operations Director. “We had to apply ingenuity to use our chain cutting techniques on the deck house in a less than conventional method, and the Ardent Guided Guillotine sectioned the hull. The method worked very well,” said Harris.

Ardent completed the removal of the TROLL SOLUTION jack-up rig in November 2016. The 7,000 tonne rig suffered a major accident while carrying out maintenance work on the well-head platform CAAN-A in the Bay of Campeche, Mexico in 2015. Before Ardent’s involvement, efforts were made to refloat and salvage the jack-up which had collapsed and sunk into the seabed in some 30m water depth where she came to rest within two metres of the operational CAAN-A platform. Ardent deployed assets from several

countries, including the CONQUEST MB-1 crane barge and a 1,000 tonne hydraulic wreck grab from the Netherlands. Further support vessels were deployed from the US and Mexico. The operation used Ardent’s newly designed Guided Guillotine to dismember the jack-up, instead of cutting with more conventional methods. “Traditional methods require either a push or pull-cut with chains or diamond wire. Pull-cuts require tunnels to be bored into the seabed, whereas pushcuts require a large framework to be

Conventional guillotine cutters are restricted to operations above the surface. The Ardent Guided Guillotine can function underwater with the precision to cut the rig into the required lift pieces. The Ardent salvage team cut the deck house into 6 pieces with Ardent Chain Pullers and cut the vessel’s hull into 31 pieces using the guillotine. The pieces were then lifted by the CONQUEST MB-1. Ardent said the project “showed the excellent integration of staff from both ex-Svitzer and ex-Titan teams". Ardent’s chief executive, Peter Pietka, said: “We look forward to more challenges and collaboration with our partners in the offshore industry in the near future."

Spanopoulos in warplane recovery IGNATIOS III towed by tug CHRISTOS XVIII and the research vessel AEGAEO of HCMR, sailed from Piraeus to the crash area where the AEGAEO relocated the aircraft and completed a final inspection. Over the following days and after several dives with the ROV the team fixed three lifting points on both wings and on the dorsal fin.

In December 2014, a twin pilot F16 warplane of the Hellenic Air Force crashed at sea south of Crete. The pilot ejected from the aircraft. The aircraft was found after a search of the crash site in water depth of 957 metres. The Hellenic Center of Marine Research (HMCR) was selected as contractor and sub-contracted Spanopoulos Group for

the recovery of the crashed aircraft. The objective was to lift the aircraft complete using an ROV and a floating crane. The engineering team took many measurements on real aircraft of the same type and, with the assistance of the ROV operators and the air force mechanics, prepared the appropriate gear. In June 2016, the floating crane 9

The ROV tied a kevlar rope to the three lifting chains and brought the free end of the rope to the surface and the crane barge started a slow ascent with a speed of 4 metres per minute to minimize pressure impacts on the aircraft. 15 metres from the surface, lifting was halted and a metal deck lowered into the water and with divers’ assistance the aircraft was placed on the deck and then hoisted aboard. The total removal operation was completed in 8 hours and the aircraft delivered to the air force at Souda Naval Base.