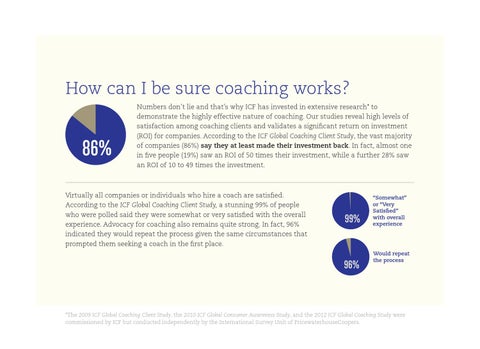 How can I be sure coaching works?

Numbers don’t lie and that’s why ICF has invested in extensive research* to demonstrate the highly effective nature of coaching. Our studies reveal high levels of satisfaction among coaching clients and validates a significant return on investment (ROI) for companies. According to the ICF Global Coaching Client Study, the vast majority of companies (86%) say they at least made their investment back. In fact, almost one in five people (19%) saw an ROI of 50 times their investment, while a further 28% saw an ROI of 10 to 49 times the investment.

Virtually all companies or individuals who hire a coach are satisfied. According to the ICF Global Coaching Client Study, a stunning 99% of people who were polled said they were somewhat or very satisfied with the overall experience. Advocacy for coaching also remains quite strong. In fact, 96% indicated they would repeat the process given the same circumstances that prompted them seeking a coach in the first place.

Would repeat the process

Overview of the benefits coaching can have on your organization. 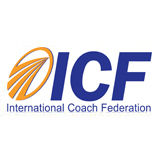