Don Packwood captures to perfection the gleaming chrome and unparalleled lines of the iconic 1961 XKE E-Type Jaguar and the 1960 Aston Martin DB4GT Zagato. Only twenty originals of this Aston were built making it extremely prized amongst collectors

and admirers. Zagato is an independent, total design centre located northwest of Milan. These smaller works showcase both the

on the waterfront. For him, it was understandably love at first sight: the long, evocative lines of this roadster adorned with the

spirit of their glamorous subjects along with the unique talents of the artist.

three pointed star, inspired me to capture her on canvas. The Elm trees of San Francisco were clothed in a multitude of late The Mount -1958 Corvette Convertible - Mt Maunganui

Villa Agnelli -1966 Lamborghini 350 GTS Spider - Oil on canvas - 70 x 100 cm - $3,500 Following a visit to the beautiful Villa Agnelli on the Italian Riviera, Don Packwood said: I couldnâ&#x20AC;&#x2122;t think of a more elegant setting for my rendering of this golden girl, a1966 Lamborghini 350 GTS Spider. Here, she nestles between a foreground of perfumed white roses and the imposing backdrop of wrought iron gates.

injection engine and at the time, the world’s fastest top speed. Both Sophia and the Gullwing are remembered for their seductive

trim and white wall tyres placed this personal luxury car at the top of the Cadillac line. A rare masterpiece, with only 815 released

curves, and both are endowed with an exotic, unforgettable beauty. 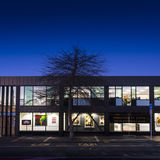 When it comes to capturing the style, beauty and grunt appeal of motorsport and classic cars, artist Don Packwood is the unsurpassed master....

When it comes to capturing the style, beauty and grunt appeal of motorsport and classic cars, artist Don Packwood is the unsurpassed master....