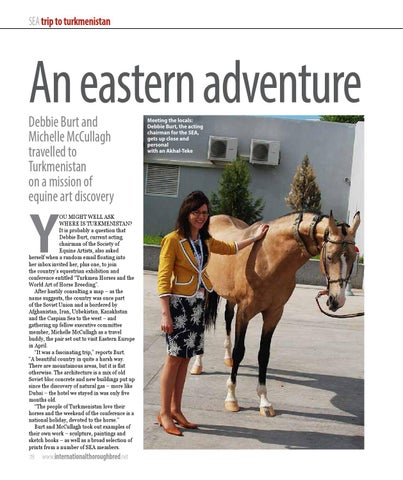 Ou MIGHT Well ASk WHERE is Turkmenistan? It is probably a question that Debbie Burt, current acting chairman of the Society of Equine Artists, also asked herself when a random email floating into her inbox invited her, plus one, to join the country’s equestrian exhibition and conference entitled “Turkmen Horses and the World Art of Horse Breeding”. After hastily consulting a map – as the name suggests, the country was once part of the Soviet Union and is bordered by Afghanistan, Iran, Uzbekistan, Kazakhstan and the Caspian Sea to the west – and gathering up fellow executive committee member, Michelle McCullagh as a travel buddy, the pair set out to visit Eastern Europe in April. “It was a fascinating trip,” reports Burt. “A beautiful country in quite a harsh way. There are mountainous areas, but it is flat otherwise. The architecture is a mix of old Soviet bloc concrete and new buildings put up since the discovery of natural gas – more like Dubai – the hotel we stayed in was only five months old. “The people of Turkmenistan love their horses and the weekend of the conference is a national holiday, devoted to the horse.” Burt and McCullagh took out examples of their own work – sculpture, paintings and sketch books – as well as a broad selection of prints from a number of SEA members.

Meeting the locals: Debbie Burt, the acting chairman for the SEA, gets up close and personal with an Akhal-Teke

A bloodstock and horseracing magazine for the global audience 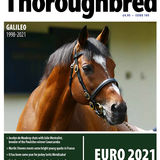