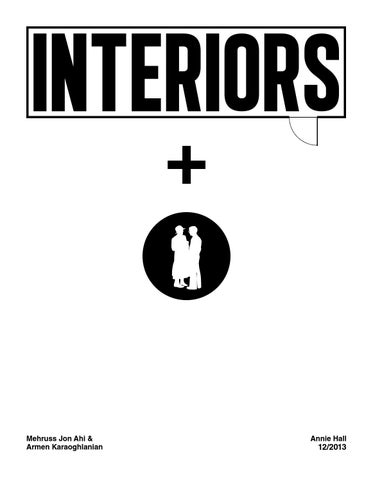 â&amp;#x20AC;&amp;#x153;There is a sense of freeness in Annie Hall, along with a desire for experimentation that allows for a very casual and comprehensive examination of a relationship, with all its humor and heartache.â&amp;#x20AC;?

Interiors: Issue 24 (12/2013) Film: Annie Hall (1977) Director: Woody Allen In his career, Woody Allen has always been interested in spatial configurations within his frames; known for occasionally having his characters walk outside the frame, his camera often lingers on empty walls until characters fill them again. In his collaboration with cinematographer Gordon Willis on Annie Hall (1977), we often discover what’s outside the frame is as important as the frame itself. There is a sense of freeness in Annie Hall, along with a desire for experimentation that allows for a very casual and comprehensive examination of a relationship, with all its humor and heartache. The film opens with Alvy Singer (Woody Allen) examining his life with and without Annie Hall (Diane Keaton). The importance of the “frame” is established in this opening scene; Woody Allen directly addresses his audience and immediately establishes a relationship outside of the narrative.

In a specific scene, Alvy and Annie speak with their respective therapists about their private lives. The scene, which lasts exactly one minute in length, relies on the space that exists outside the frame. The scene features a splitting of the screen; however, instead of the method of filming these scenes separately, then stitching them together, Gordon Willis suggested that the scenes be filmed simultaneously on a constructed set with a divider that separated the actors. In doing so, both actors are provided with a much more organic method of working, resulting in a much more natural process, which assists them in the excessive overlapping of dialogue. The fact that the actors could perform without

being interrupted was reportedly a revelation for Woody Allen. The scene highlights the contrasts between both individuals. They both recall similar events very differently. Alvy’s therapist asks, “How often do you sleep together?” Annie’s therapist then asks a slightly different version of that same question, “Do you have sex often?” Alvy and Annie both reply with the same answer, but their feelings about them are dissimilar. Alvy notes, “Hardly ever, maybe three times a week.” Annie notes, “Constantly! I’d say three times a week.” The scene highlights their viewpoints and offers the suggestion that Alvy and Annie are no longer compatible. In an earlier scene, after Annie returns from her first session, she exclaims that she discussed her life in depth and cried. Alvy immediately notes that in his fifteen years of therapy, he has never once cried or experienced such progress.

In terms of composition, it’s interesting to note that the divider doesn’t separate the rooms evenly. The scene itself provides us with little information about the surrounding space; however, a production photograph offers us a complete look at the space. The production constructed full rooms for both Alvy and Annie’s therapists, but the final scene shows a small portion of Annie’s therapist’s office. This was likely because of the size of the couch Alvy rests on. In our diagram, we have indicated the space that we ultimately see in the scene. The production design of the rooms is imperative because the specifics speak to the traits of these characters. Alvy’s therapist’s office, with its brown color palette and wood paneling, offers a very traditional design, speaking to the old-fashioned nature of the character. In addition, the doctor-patient setup itself is also conventional, with Alvy reclining on a couch with his doctor behind him. The production photograph also shows a library

and fireplace in the office space, which is off-screen in the final scene. Annie’s therapist’s office is much more modern in its design. The white walls of the room are supplemented by a contemporary painting that hangs behind her. Annie also sits in a lounge chair rather than a couch. This references an earlier scene in the film, where Annie notes, “I didn’t have to lie down on the couch, Alvy. She had me sitting up.” In addition, while we don’t see her therapist in the scene, the production photograph indicates that the characters face one another. The image also shows off the minimal design of the entire room, providing us with an understanding how Annie’s session is much more modern in its approach. In constructing a scene that highlights the contrasts between both individuals, we are also left with the impression that perception is everything. INT