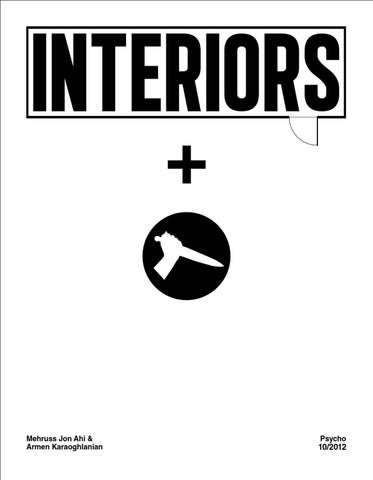 â&amp;#x20AC;&amp;#x153;The physical space of the bathroom is less important than how splices of shots and sound design are used as cinematic manipulation.â&amp;#x20AC;?

Interiors: Issue 10 (10/2012) Film: Psycho (1960) Director: Alfred Hitchcock The career of Alfred Hitchcock spanned over fifty years, from black and white silent films onto color sound films. The Master of Suspense always showed an interest in architecture and often space (or lack thereof) often played an essential role in his films. In Lifeboat (1944), he focused on limited space by setting his entire film on a boat in the middle of an ocean. In Dial M for Murder (1954) and Rear Window (1954), two of his films that were released a little more than two months apart from each other, he uses one-location settings. In Psycho (1960), he opted for a much more simpler approach and produced the film using his television series crewmembers. The film was produced for a low budget of $800,000 and was filmed in six weeks, shooting in mostly interiors by using non-elaborate sets. In keeping costs low, the film was shot in black and white and was comprised of mostly close-ups. The entire film focuses on spatial relations. The opening shot of the film is a wide image of a hotel room that introduces Marion Crane (Janet Leigh) and Sam Loomis (John Gavin) to the audience; we are essentially intruding voyeurs peeping into their private space from a distance. Marion later steals $40,000 and leaves Phoenix for California. The notion of space becomes clear as she drives from one state onto another, referencing the distance that separates her from Sam. The Bates Motel, which is owned by Norman Bates (Anthony Perkins), introduces us to the idea of the relationship between architectural spaces. François Truffaut, in his discussion with the famed director, points out the architectural contrast between the Norman Bates’ vertical house and his horizontal motel. This contrast in composition becomes very significant throughout the film, considering the theme of duality. Norman Bates continuously runs from one building to the other, which

becomes a continuous reference to the two personas he balances throughout the film. This provides us with a clear indication that the spaces that exist between his house and motel provide an opportunity for his seamless transformation. The motel itself makes use of space in many ways as well. Norman carefully assigns Marion the first room beside his office, simply because “it’s closer.” In doing so, we later discover it’s because he has a peephole in his office that he has devised as a way of peeping in on guests. Norman uses his peephole as a way of peeping in on Marion as she undresses. Norman’s peephole shows us how the director merges together two spaces. In our diagram of the shower scene in the film, we have focused on a more abstract analysis of how space is used in this film. The physical space of the bathroom is less important than how splices of shots and sound design are used as cinematic manipulation. The now-famous shower scene, in which Alfred Hitchcock’s leading lady is murdered less than halfway into the film, is his centerpiece scene for this film. The scene was filmed in seven days, requiring seventy camera setups for forty-five seconds of footage. The shower scene has been broken down into shots and has been analyzed in depth in terms of editing; no other film in cinema history has been written about as much as Psycho. The analysis we have set forth in our diagram, however, highlights how the technical aspects of cinema can alter our sense of space. The scene we have analyzed and diagrammed begins with Marion sitting and writing at the desk beside her bed. Marion keeps track of the money she has stolen, but she soon stops and rips up the piece of paper she has been writing on. Marion hesitates as she looks for a place she can throw away her pieces of paper, as she soon decides her best option is flushing the note down the toilet. It’s interesting to note that Psycho was the first film that ever showed a flushing toilet in a motion picture. The image of a flushing toilet reportedly received complaints of “indecency”

from audiences. The shower scene itself consists of shots that have been constructed rather than an objective camera that shows Marion’s murder. In the beginning of the scene, we are presented with a number of shots of Marion entering the shower and washing herself. The shot of the showerhead shooting water down on her become indicative of the fact that she is cleansing herself and washing away her guilt. There is also a shot of her facing the camera as we move to the side of the shower wall. The director places his camera at this angle, where the shower wall stood, as a way of creating suspense when Marion’s killer walks in behind her. The added suspense comes from the fact that we only see his shadow from behind the curtain. François Truffaut describes Marion’s killing as “rape” because of its relentless depiction of a knife piercing its victim. The director cleverly makes us believe that the knife pierces Marion’s body, although the knife never actually pierces her body. The director uses space as a way of collecting splices of shots. The editing, rather than the architecture of the surrounding space, becomes essential in the construction of this scene. The scene ends with Marion’s death, as we see her lying lifelessly on the bathroom floor. There is a match cut of an image of her blood swirling into the shower drain and her pupil, as the camera pulls away from the bathroom and onto a newspaper that highlights her crime (she has now paid the ultimate price) and a final shot of Norman Bates’ house. The diagram we have presented highlights the moment of Marion’s murder. In our diagram of the scene, we have also emphasized parts of the room that influence the space of the room itself. In the wall opposite to the bathroom, we have drawn in the part of the wall where Norman Bates’ peephole is. In the bathroom, next to the toilet, we have included a piece of paper that Marion accidentally drops while flushing her note

down the toilet. This becomes an essential plot point toward the end of the film when Sam and Marion’s sister, Lila, search her room. The piece of paper isn’t referenced until much later in the film, but is nonetheless part of the space of the bathroom at the time of Marion’s murder. In his discussion about his work, Alfred Hitchcock, has always believed that this film, more than any of his other films, was a film that belonged to filmmakers. The shower scene is an example of this belief. The director was primarily interested in the effect the film would have on his audiences. In an interview for the film, he shared, “I don’t care about the subject matter; I don’t care about the acting; but I do care about the pieces of film and the photography and the sound track and all of the technical ingredients that made the audience scream. I feel it’s tremendously satisfying for us to be able to use the cinematic art to achieve something of a mass emotion.” The moments that were important during the construction of this film were moments that could be manipulated. These decisions that he perfected with this film later became influential for future filmmakers. Martin Scorsese modeled boxing scenes in Raging Bull (1980) after the use of shot selection in the shower scene in Psycho. Psycho, in its careful construction, is a film that epitomizes filmmaking. In working with space in terms of shot selection and editing, Alfred Hitchcock created a scene that was, as he considered it, “pure film.” INT