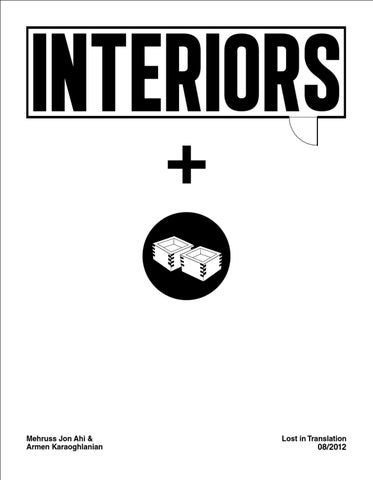 â&amp;#x20AC;&amp;#x153;Sofia Coppola creates an impossible scenario using the space of the hotel room; she brings two married people, puts them in bed together, and somehow makes their entire encounter feel innocent.â&amp;#x20AC;?

Interiors (08/2012) Film: Lost in Translation (2003) Director: Sofia Coppola Sofia Coppola’s first two films, The Virgin Suicides (1999) and Lost in Translation (2003), can both be considered companion pieces. The female filmmaker explores city spaces with both films. In her sophomore film, Sofia Coppola transplants her audience from the Detroit suburbs to the urban Tokyo. Lost in Translation introduces us to the character of Charlotte (Scarlet Johansson), a young wife of a celebrity photographer on assignment in Tokyo, with an image of her resting in bed, wearing transparent pink underwear. The character of Bob (Bill Murray), an aging film actor, is introduced in a cab. Bob and Charlotte, like the director of this film, are tourists in this city; as a result, we are introduced to the city of Tokyo through the lens of a tourist and as visitors of this space, rather than native citizens. Sofia Coppola’s fascination of a city covered in neon lights is evidenced throughout a number of scenes. Bob and Charlotte navigate the spaces of an unfamiliar culture, and the impressions we are left with of Tokyo, as an audience, are impressions created by a foreigner to the city. The adventures Bob and Charlotte go on (restaurants, clubs, karaoke bars) are all presented from the perspective of an American. Sofia Coppola romanticizes Tokyo and her film is an idealization of this space. The Park Hyatt Tokyo serves as the setting for the film. The hotel occupies the top fourteen floors of the Shinjuku Park Tower in Shinjuku, Tokyo. Sofia Coppola has described the hotel as one of her “favorite places in the world.” The Shinjuku Park Tower consists of three sections; floors 1-8 are retail stores, floors 9-37 are office floors and floors 39-52 belong to the hotel. The hotel itself combines worlds and cultures together with its offerings in dining and entertainment. The hotel consists of French and Japanese restaurants, Girandole and Kozue, respectively. The New York Bar serves as the meeting location for

Bob and Charlotte. The hotel is considered a prime destination for visitors to the city, primarily celebrities, and the fact that Sofia Coppola sets her film in such a modern, popular hotel is further evidence that she is interested in spaces that interest her as a foreigner. The fact that the hotel is considered an “elegant oasis of space” also shows us that she is interested in actual locations as opposed to constructed sets. Lost in Translation was born out of her desire for wanting to make a “love story without being nerdy.” The film explores the “spaces” of relationships, focusing on moments of connection that are created when Bob and Charlotte run into each other throughout the hotel. The diagram we have presented focuses on a scene in the film when Bob and Charlotte watch La Dolce Vita (1960) together in Bob’s hotel room. This scene shows their eventual transition on the bed as Sofia Coppola explores the proximity of Bob and Charlotte’s bodies. Bob begins this scene by lying down on his stomach at the foot of the bed, drinking sake with Charlotte, who sits on the floor on the left side of the bed. The following shot of the film is of Tokyo, as seen through Bob’s hotel window. The camera pans and focuses on Bob and Charlotte’s reflection. In this shot, Bob is still lying on his stomach, whereas Charlotte now sits on the bed. Charlotte comments that neither one of them should visit this city again because doing so “would never be as much fun.” The final shot of the scene consists of both characters lying on their backs together in bed. Sofia Coppola explores feelings of loneliness and uncertainty. In Charlotte’s case, it’s the absence of her husband that creates doubt in her life. In Bob’s case, it’s the unhappiness of his routine life with his family. These characters, in some sense, complete each other and fill each other’s voids, but at the same time, restrain themselves from going past the point of no return. Charlotte questions Bob on life and marriage in bed and immediately says, “I’m

stuck. Does it get easier?” Bob’s reply is ambiguous. “No. Yes. It gets easier.” It’s interesting to note that Sofia Coppola, in her personal life, divorced her first husband, Spike Jonze, in 2003, during the year of the film’s release. The majority of this scene is filmed from up above. The camera looks down on them together in bed, looking down on their lives. Bob and Charlotte’s bodies eventually begin shifting while in bed. Charlotte turns to her left and places her arm under her pillow. Bob turns to his right and places his arm under his head. The next few shots are isolated shots of each character, as Bob continuously reassures Charlotte. Bob and Charlotte then close their eyes and continue on with their conversation. The scene ends with Bob gently reaching out and touching Charlotte’s foot, telling her she is not hopeless. The scene examines their friendship and explores this gradual evolution through a bed. Sofia Coppola creates an impossible scenario using the space of the hotel room; she brings two married people, puts them in bed together, and somehow makes their entire encounter feel innocent. There are no expectations and the audience never assumes the characters will act on their feelings. The scene explores the innocent relationship between two new friends. Lost in Translation contains several intertextual references, which serve as a guide in understanding the film. Sofia Coppola has commented on the relationship between Bob and Charlotte, which she states was influenced from the relationship between Philip Marlowe (Humphrey Bogart) and Vivian Rutledge (Lauren Bacall) in The Big Sleep (1946). The characters in both films bond in a romantic, though not sexual, way. In both instances, romance is suggested, but the characters are companions more than anything else. The inclusion of La Dolce Vita also makes connections with the individual lives of the characters as well. La Dolce Vita and Lost in Translation are both films that explore the

topic of tourism. In one of the sections of La Dolce Vita, Sylvia (Anita Ekberg), a famous Swedish-American actress, visits Rome and explores the unfamiliar city with a companion, Marcello (Marcello Mastroianni). This is the scene that Bob and Charlotte watch in the hotel room; more specifically, it’s a moment in the film when Sylvia picks up a stray kitten while wandering the streets. This comments on the fact that the kitten was “lost” and that a foreigner was the sole person who paid attention to the abandoned kitten; to the rest of the city, and Marcello himself, this kitten was among hundreds of stray animals in the streets. The same notion applies to Lost in Translation. Bob and Charlotte are both lost in an unfamiliar city, but are also in search of answers in their individual lives. In their home country of the United States, Bob and Charlotte might not otherwise have the opportunity to run into each other – or even notice each other, for that matter – but the two characters are able to find each other in a foreign country such as Japan. The fact that Bob and Charlotte watch La Dolce Vita, a Federico Fellini film, in Bob’s hotel room, is also a reference to the characters in our film. La Dolce Vita focuses on a journalist (Marcello), who seeks freedom and adventure in his life. Marcello sacrifices his relationship with his girlfriend for a chance at the “sweet life” of partying and being with other women. The film ends with an image of Marcello living his “dream” lifestyle – he loses everything and learns that such a lifestyle is far from a dream. Lost in Translation is a film that couldn’t have been made without La Dolce Vita. It’s a film that acknowledges the outcome of La Dolce Vita in its own narrative. In her film, Sofia Coppola prevents her characters from gambling away everything in their lives. It’s as if Bob and Charlotte – and more specifically, Sofia Coppola – are aware of the potential outcome if the two act on their feelings. Marcello’s mistake saves Bob and Charlotte from going too far and risking their marriage. INT contact: interiorsjournal@gmail.com