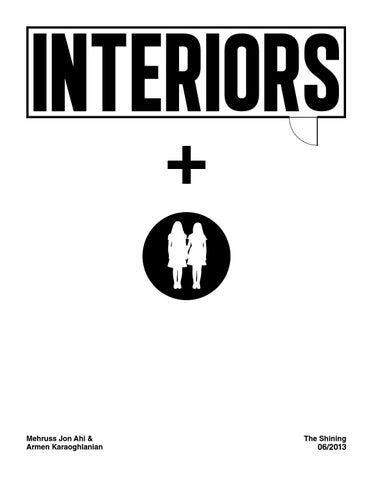 &quot;The fact that Stanley Kubrick had full control over the design of the sets in The Shining suggests that any errors or inaccuracies in its design were intentional.&quot;

Interiors: Issue 18 (06/2013) Film: The Shining (1980) Director: Stanley Kubrick Stanley Kubrick exerted complete control over the look of his films and was revered for his perfectionism. It’s interesting to note, then, that in The Shining (1980), his adaptation of the Stephen King novel of the same name, the first three minutes of the film were photographed without his presence. The film opens with a helicopter shot over a lake, as we focus on a Volkswagen driving on a narrow road. In the car, we will soon discover is Jack Torrance (Jack Nicholson), who will arrive at the Overlook Hotel for an interview for a caretaker position. In this relatively simple opening sequence – a car driving through a long stretch of road, the exterior shot of the hotel and Jack walking inside the hotel – the director films in two states in the United States and a studio in England. The opening sequence of the lake and the road were filmed in Glacier National Park in Montana, north of Saint Mary’s Lake, on the “Going-to-the-Sun” road. Greg MacGillivray, a distinguished helicopter cameraman, filmed the footage at the director’s request. The Timberline Lodge was used for the exterior shots of the Overlook Hotel. The Timberline Lodge sits is on the south side of Mount Hood in Oregon, approximately 60 miles east of Portland. The Stanley Hotel in Colorado was the source of inspiration for Stephen King’s novel, although Stanley Kubrick seemed much more interested in the architecture and look of the Timberline Lodge in Oregon. The interiors of the hotel, where we spend much of our time over the course of the film, were constructed at the Elstree Studios in England. In using three different settings, Stanley Kubrick was interested in achieving a specific look for his film, one that required him to use different locations for these establishing scenes. In addition, constructing the interiors of the hotel in a studio provided him with full artistic control over the space.

The Shining opens with a discussion about space. Stuart Ullman (Barry Nelson), manager of the Overlook Hotel, notes that the location for the hotel was chosen because of its “seclusion” and further points out that the stretch of road leading up to the hotel is 25 miles in length, reinforcing the idea, along with the lengthy opening shots at the start of the film, that the hotel is sealed off and isolated from society. The audience, as a result, is immediately presented with an understanding of how this space is detached from civilization. There are also only a handful of scenes that take place outside of the walls over the hotel. It’s within this controlled space that Stanley Kubrick sets his film. The fact that Stanley Kubrick had full control over the design of the sets in The Shining suggests that any errors or inaccuracies in its design were intentional; as a result, instead of creating a functioning space, he presents us with an implausible and irrational design. The space within the hotel therefore is spatially impossible. The film has been studied by a number of enthusiasts who have attempted to map out the space of the hotel. They have discovered numerous errors – doors and hallways lead to nowhere, while impossible windows, such as Stuart Ullman’s office window, exist in a number of rooms.

In an interview with Xan Brooks of The Guardian, Jan Harlan, executive producer of The Shining and Stanley Kubrick’s brother-inlaw states, “The set was very deliberately built to be offbeat and off the track, so that the huge

ballroom would never actually fit inside. The audience is deliberately made to not know where they&#39;re going.” The meticulous design of the sets also emphasizes the vastness of the hotel. The high ceilings add to the overwhelming sense of powerlessness, as Jack and his family become dwarfed by the size of the surrounding space. This is also mirrored with the hedge maze, which doesn’t appear in the novel and was created by Stanley Kubrick for the film. In the maze, characters can’t find their way because of its incredible size. This presents us with the notion that Stanley Kubrick’s Overlook Hotel is designed as a maze. In making the hedge maze a crucial part of the film, he establishes similarities between the maze and the hotel. The maze echoes the interior spaces of the hotel; we follow Danny (Danny Llloyd) around the hotel with Garrett Brown’s inventive Steadicam work and later in the maze as Jack chases him. In drawing these parallels, it’s clear that the complex design of the set and the fact that the hotel is spatially impossible and disorienting is deliberate in its design. g

The labyrinth design of the hotel also suggests that it’s inescapable – perhaps physically and in terms of its history. This also brings up the theme of repetition throughout the film, an ongoing recurrence with its characters and narrative. Jack says he feels like as if he has been to the hotel before. Delbert Grady (Philip Stone) later tells Jack that he has always been the caretaker of the hotel. Jack is later frozen in the maze and frozen in time in the photograph. The notes in Jack’s typewriter display repeated typographical variations of the same sentence. The violence and history of the hotel also repeats itself – Charles Grady kills his family in

1970 and Jack later attempts to do the same with his family. In addition, when Danny stumbles upon the twins (Lisa and Louise Burns) in the hallway, we hear the girls say, “Come and play with us, Danny. Forever… and ever… and ever,” further suggesting an ongoing loop within the hotel. The Shining, as a horror film, however, is much more concerned with what we don’t see – what’s outside of the frame in the spaces that we do not inhabit – than with what we do see. In our diagram, we focused on the scene where Danny encounters the twin girls in the hallway on his tricycle. These girls are introduced in three separate occasions beforehand. The first instance is when Danny is still in his Denver home. In his bathroom, he “speaks” with Tony about his concern with the hotel, as he sees the twin girls as well as a shot of blood spilling from an elevator in the hotel. The second instance is when Danny is in the Games Room at the Overlook Hotel. Danny turns around and sees the twin girls in the room with him. The girls turn and walk away from him. This occasion also marks the only time the girls actually move. The third instance is when Danny approaches Room 237. 3

In showing us these quick shots of the twin girls – which show them standing in an hallway and appear for no more than a second – suggest to the viewer that these twins will be revisited in some form over the course of the film. They become a repeated visual motif. It’s because of these recurring images, then, that when Danny rides around the corridors of the hotel, we are constantly on edge – not because of what is in the frame, but because we fear what might be around the corner each time he makes a turn. In addition, when Jack

describes his first impression of the hotel to Wendy (Shelley Duvall), he tells her “It was almost as though I knew what was going to be around every corner.” The audience, as a result, is always anticipating what could be waiting for them around every corner, and because we have previously seen the twins standing in a hallway, we fear we might run into them at any given moment. The hallway where Danny encounters the twins is on the same floor as his family’s hotel room. In an earlier scene in the film, Wendy exits the elevator and brings breakfast for Jack. The hallway immediately behind Wendy after she exits the elevator is the hallway where Danny sees the twins – to the left is where the twins are and to the right is where Danny stops. Wendy later opens their room door, and again, immediately behind her is another hallway that is part of this iconic scene. This is the hallway where we first see Danny riding, right before he makes the turn and encounters the twins.

The terror in this scene is self-contained; while all the evil takes place within this single hotel space, the horrific death of the twins is located on the same floor as their family’s hotel room, on the opposite side of the hall (once again, emphasizing doubles and repetition). Danny’s subconscious places the girls, both alive and dead, in the same space, which results in a stark and frightening contrast. INT