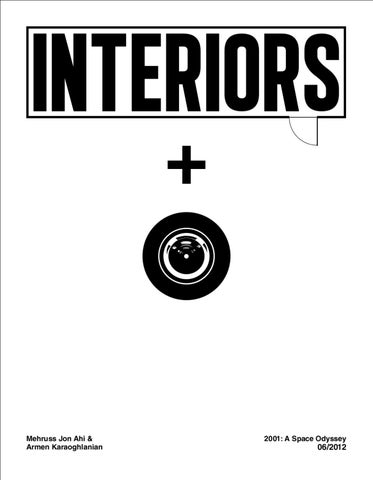 â&amp;#x20AC;&amp;#x153;The progression of time in this space is accelerated and determined by varying perspectives through the character of Dave. â&amp;#x20AC;?

Interiors: Issue 6 (06/2012) Film: 2001: A Space Odyssey (1968) Director: Stanley Kubrick Stanley Kubrick has been called many things; pretentious, unpretentious, alienated, ambiguous, audacious, empty, disturbing, outrageous, devilish, soulless, patient, unflinching, impersonal, arrogant, calculated, paranoid, aloof, hopeful, positive, innovative, helpful, unpredictable, obsessive, pessimistic, existentialist, visionary, genius, freak, perfectionist, skeptic, recluse, tyrant, misogynist, cineaste, original, and in the immortal words of Kirk Douglas, a “talented shit.” It’s interesting to note then, when asked about his film, 2001: A Space Odyssey (1968), Stanley Kubrick himself said, “It&#39;s not a message that I ever intend to convey in words.” The film itself is a “nonverbal experience.” There are no words – or dialogue – for more than two-thirds of the film. Stanley Kubrick is a visual storyteller, and in his films, words are secondary. The closing scene of 2001: A Space Odyssey, which we analyzed and diagrammed, brings us full circle when compared with the opening scene of the film. The film begins and ends without words. The apes in the opening sequence of the film are on the verge of evolution. They are visited by a mysterious alien force, which is represented by a monolith. The appearance of the monolith is representative of the next stage in evolution. These monoliths provide guidance with evolutionary progression. The few apes that begin using tools move onto the next stage of evolution, while the others face extinction. This evolutionary leap is symbolized in a match cut as an ape throws a bone into the open air. Stanley Kubrick cuts from the image of the bone in the air onto a floating spaceship in space and effectively jumps forward four million years in a single second. This progression of time is later paralleled in the closing scene of the film. The second appearance of a monolith

comes during a time when humanity is once again on the verge of an evolutionary breakthrough. The next logical step in evolution for the human race at this point in time is their race to the stars. This evolutionary leap is represented through HAL 9000, a computer aboard their spaceship, which is arguably more advanced than the humans. HAL eventually becomes a threat to the safety of the humans and we are provided with an interesting paradox. The tools that once aided us in our progression forward are now limiting us. In other words, man has now lost control of technology, hence the need for our next step of evolution. Dr. Dave Bowman, a scientist on the Discover One, is transported into another world or dimension after defeating HAL. In the end of his journey, Dave’s spaceship miraculously appears in an empty room with white walls. There is also an immediate feeling of distance in this room – from the outside world as well as from technology, in general. The classical architecture of the room is complemented with Renaissance paintings, which are fixed into alcoves rather than simply being framed, suggestive of windows or mirrors. The room consists of a bed, several chairs and cabinets and glowing floor tiles. It’s interesting to note that a close examination of this space helped us discover several facts. The floor tiles serve as a compositional guide throughout the film and also assisted us in determining the actual size of the room. The room is composed of eight tiles by ten tiles with each tile being roughly 4’ x 4’ in size. The room also consists of a chair that sits beside a cabinet; its positioning moves throughout this scene resulting in a continuity error, but a close examination of the scene helped us discover that this was a deliberate decision on the part of Stanley Kubrick. In speaking of this space, Stanley Kubrick stated that Dave is “placed in a human zoo approximating a hospital terrestrial environment drawn out of his own dreams and imagination.” This space can also be considered a holding area for Dave until he is

ready to move onto the next stage in evolution. In calling this space a human zoo, we are provided with a comparison of this private space with a public space. In a zoo, animals are confined within enclosures, and similarly, Dave (and perhaps people that have come before him and will come after him) is confined in this restricted space. The progression of time in this space is accelerated and determined by varying perspectives through the character of Dave. In this scene, space affects time and has an influence on the progression of time; with each shift in perspective, time passes and Dave ages. The diagram makes note of these varying perspectives, and each time Dave’s perspective changes, we indicate this shift with a number. The scene begins with Dave in his spaceship. In our diagram, his spaceship is in dotted lines. Dave first sees nothing from within his spaceship, but later, he sees himself standing across the room. This is our first instance of Dave’s perspective. In this instance, we clearly see a chair sitting beside Dave’s spaceship. This chair is represented in our diagram with dotted lines. Stanley Kubrick cuts from his wide shot onto Dave’s perspective, and as he does, we see that the spaceship has disappeared. The chair, however, which we saw earlier beside the spaceship, has relocated and moved a few feet to the side of a cabinet. This is represented in our diagram with the clearly outlined chair beside the chair with the dotted lines. This is a clear continuity error, but it’s one that was made deliberately by the filmmaker. In adjusting the positioning of the chair, Stanley Kubrick retains a compositional balance with the spaceship in the room. In the later moment of the film, when the spaceship disappears, the chair moves back to its permanent position and is in composition with the rest of the room. Dave now moves in the bathroom outside of this room, and as he turns, his eye catches another human in the distance. This becomes the second instance of perspective

in this space. Dave sees an elderly man eating in the same area where the spaceship was sitting. The elderly man stops eating and turns. There is no recognition that he has seen Dave, and as he gets out of his seat and moves closer, we realize that this is Dave himself, aged dramatically. Stanley Kubrick then cuts to a wide shot of the room, and we realize that the first Dave has disappeared. The elderly Dave continues eating until he reaches across his table and knocks down a wine glass. Dave reaches down for the broken pieces, but his attention is diverted onto the bed to the right of him. Dave pauses and we now shift onto our third perspective. Dave sees a dying man in his bed; a close-up reveals that this is, in fact, Dave nearing death. Stanley Kubrick once again cuts to a wide shot and we realize that the elderly Dave who was eating at his table is no longer in the room. The dying Dave reaches his hand out into the distance and points. There is now a monolith placed in front of his bed. This becomes our fourth instance of a shift in perspective. Stanley Kubrick cuts from the monolith onto the bed, where Dave is now replaced by a Star Child, a fetus-like being enclosed in an orb. The Star Child in relation to the monolith marks the fifth change in perspective within this scene. These changes in perspectives drive the progression of time within this scene. The Renaissance paintings make a connection to the theme of rebirth. The fact that the Star Child is born in a world free of technological constraints also comments on the fact that there is a need to evolve into this next stage of consciousness. The events in this final scene unfold in a delicate, slow burn fashion, but it’s time that moves at an accelerated rate. This non-linear progression of time suggests that Dave could potentially have inhabited this space for decades, but we, as an audience, along with Dave, see his life pass quickly. Stanley Kubrick delicately overlaps these instances of passing time, without dissolves or fades, but rather in a controlled manner. The single space within this room is no longer bound by the conventions of linear time. INT contact: interiorsjournal@gmail.com