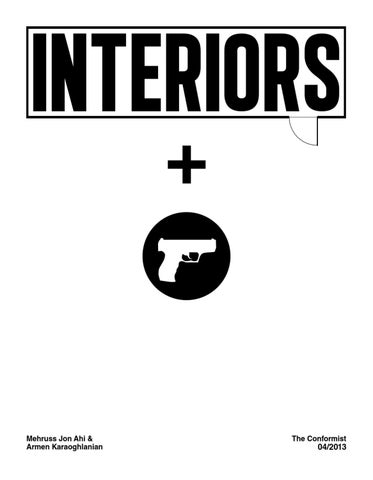 Page Collaboration by Midnight Marauder Midnight Marauder is a Los Angeles - based designer who specializes In Film / Movie Posters, Print Design and DVD Packaging. His work can be seen at www.midnight-marauder.com.

“Bernardo Bertolucci’s use of this space in this film draws parallels to the political beliefs at the time.”

Interiors: Issue 16 (04/2013) Film: The Conformist (1970) Director: Bernardo Bertolucci In an effort to understand Bernardo Bertolucci’s The Conformist (1970), as well as the filmmaker’s use of locations and space, it’s essential to understand the history of the EUR district in Rome and its deep ties with fascism. The diagram we have presented is of the scene in the film that takes place at the Palazzo dei Congressi, where the protagonist Marcello Clerici (Jean-Louis Trintignant) visits his ill father. This scene runs just under two minutes. The Palazzo dei Congressi is located in the EUR district, a residential and business district in Rome. Benito Mussolini created the district in the late 1930s for the Esposizione Universale Roma, a world fair that would be held in 1942, celebrating twenty years of fascism. This was also a way of directing the expansion of the city towards the southwest and the sea with the intentions of forming a new city center in Rome. The start of World War II and Italy’s involvement in the war, however, canceled the original plans for the exposition. The EUR district, as a result, was never finished, and the Palazzo dei Congressi, was completed nearly two decades later. The desolate area is now seen as a complete failure on a massive scale. Bernardo Bertolucci’s use of this space in this film draws parallels to the political beliefs at the time. The majority of the EUR’s buildings, including the Palazzo dei Congressi, were the result of a national competition. In the case of this building, countless entries were received and only seven were selected for a second round. The emphasis shifted from technical and functional aspects to theoretical and aesthetic aspects. The chosen architect for the space was Adalberto Libera, who was also the original designer for the Casa Malaparte on the island of Capri, which was featured prominently in Jean-Luc Godard’s Le Mépris (1963). The building’s sharp architectural

outlines, its clean shapes and the attention to detail make this building a significant example of rationalist architecture. There are similarities between the architect of the building, Adalberto Libera, and the protagonist of the film, Marcello Clerici. In understanding these similarities and making these connections, we can better understand Bernardo Bertolucci’s use of this particular location in his film. Benito Mussolini had a strong control over architects in Fascist Rome. These architects were forced to join the party; as a result, many architects lied about their beliefs as a way of defending their careers. The most successful architects became important party members, and many architects tried to get higher up in the fascist regime in hopes of having their career advance. It’s believed that Adalberto Libera’s good fortune in his profession was due to his close links to the party. In this sense, we can draw parallels with the architect and the protagonist, who “conforms” to the fascist ways in order to live a &quot;normal&quot; life. The difference here is that Marcello Clerici puts on a lie as a way of advancing, whereas Adalberto Libera actually believed in the cause. Marcello Clerici’s father in the film lives in a mental asylum and believes he is one of Benito Mussolini’s men. It’s interesting to note how the filmmaker makes these connections, filming on a popular building with ties to the fascist regime. Bernardo Bertolucci shows off the vastness of this space with wide shots. The film’s cinematographer, Vittorio Storaro, photographs this scene by closing his aperture and achieving deep focus, providing his images with a larger depth of field. There is, however, a continuity error in this scene. In this space, there are six rows of benches. In the third screenshot, his father is sitting in the third row. In the following screenshot, his father has moved up to the fourth row. The foreground, middle ground and background of the shots are in focus, which offers equal importance to the characters as well as the surrounding space. The architecture of this space is as essential to the story as its characters are. INT