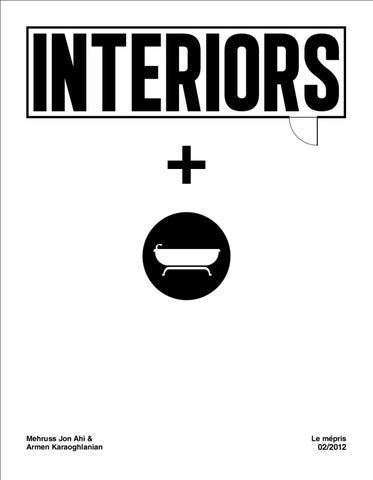 â&#x20AC;&#x153;The fights that take place between Paul and Camille are all concerned with escape; that is, the fights result in a transition from one space to another.â&#x20AC;?

Interiors: Issue 2 (02/2012) Film: Le mépris (1963) Director: Jean-Luc Godard The use of a single location for a prolonged period of time often makes the assertion that the space itself is fundamental to its inhabitants. In some instances, such space can be reflective of a character’s emotions. Jean-Luc Godard uses space in Le mépris (1963) as a reflection of the characteristics of his characters, as well as an arena that houses emotion and becomes the main area of conflict for the relationship between Paul (Michel Piccoli) and Camille (Brigitte Bardot). The space within their apartment (where a prominent scene takes place) consists of both love and contempt, and the scene itself shows off the fragments that spill over within the space itself. Jean-Luc Godard, known for his deliberate disregard of time, such as jump cuts that skip audiences forward in time, opts for a single location (Paul and Camille’s apartment) as the space that their love (or lack thereof) for one another is examined in real-time. The scene in Le mépris that takes place in Paul and Camille’s apartment is a significant part of the film, not just because of the scene itself is an examination of their relationship, but also because of the fact that its running time makes up close to a third of the film itself. Jean-Luc Godard uses this space, within this contained location, to emphasize the disintegration of their relationship. Jonathan Rosenbaum of the Chicago Reader writes that the scene is “exhaustive as well as exhausting” and that the scene itself is a chronicle of “growing disaffection.” The decision to frame the collapse of the relationship within this single location provides us with the notion that Paul and Camille’s arguments – their fights, their differences with one another – come from the household; the nucleus. There are numerous references to outside people who pose a threat to their relationship, but these sources are dismissed. The scene itself brings up the

notion of private and public space, suggesting that although Paul and Camille travel with their problems, their apartment is the center of the drama. The three significant fights that take place within this space all take on different dimensions. The more hostile Paul and Camille’s feelings become, the more certain spaces throughout the house become occupied. The fights that take place between Paul and Camille are all concerned with escape; that is, the fights result in a transition from one space to another. The first fight takes place in their living room. Paul slaps Camille and expresses his contempt for marrying a “28-year-old typist,” further suggesting the start of the end of their relationship. The fight, however, ends with an innocent gesture, as Camille escapes Paul’s attempted kiss and moves from the living room (public space) into the bathroom (private space). The second fight starts in their bedroom after Paul picks up their ringing telephone. Paul lies to Camille’s mother and claims she is not home, in an attempt to find out if Camille was telling him the truth earlier. Camille, out of anger, tells Paul that she will be sleeping on the couch, “every night, starting tonight.” The fight ends on the red couch, after Paul grabs and hurts Camille’s arm. Camille jumps off the couch and walks into the bathroom. Camille escapes Paul once more, although because the fight started in the bedroom, she shifts from bedroom (private space) to living room (public space) to bathroom (private space). This repeated occurrence suggests that Camille finds salvation in her private spaces. The third fight concludes their relationship, as a whole. Paul lashes out of anger and grabs Camille, resulting in her hitting him. Camille then storms out of their apartment as she tells Paul that she despises him. This shows us another escape; Camille moves out of this space, not into another private space, as we would assume, but out of the space itself. This marks an end in their

relationship for her; she reaches a point that escape out of the space itself (the problem itself) is her remaining solution. The incorporation of red, white and blue as the color scheme of the film is an obvious reference to both national flags (France and the United States), but is also evocative of the thematic elements of the narrative. In some sense, red signifies tolerance, committal and love, whereas blue represents coldness, separation and disdain. The color white remains a neutral force, but also stands in for emptiness; their bland home, and their blank, white walls stand in for the hollowness of their relationship. The film examines the death of love; the opening title of the film is in red letters, but the closing title is in blue. This highlights the eventual coldness that will befall them. In their apartment, Paul and Camille move from their red couch onto their blue chairs as their fights progress. This shift from red to blue, much like the title cards of the film, suggests the decline of their love for one another. Their love for each other has now been substituted for coldness. The use of space during these fights also supports the notion that their relationship is on the brink of collapse. In their living room, there is a statue of a woman with her head down that finds itself in much of the shots throughout their fights. Paul and Camille often quarrel in front of and near the statue, but the fact that the statue’s head is down suggests that it is difficult to watch them quarrel. The audience, like the statue, remains in the room as objective observes, regardless of how unbearable their arguments become. In addition to the use of space throughout the film, both characters use space to alter their individual selves in this scene. Paul wraps himself up in a towel, reminiscent of a toga. The connection made here is with the Odyssey (the film he is writing), but also suggests the power he has over the weaker Camille. In contrast, Camille’s black wigs show us how Jean-Luc Godard references his own relationship with Anna Karina. The most interesting examination is how her character

changes over the course of this period; observe Camille’s appearance when she first enters the house and later when she exits. The beautiful, longhaired blonde that walks into the house later walks out of the space with short, black hair. Camille changes both in a figurative and literal sense during this scene. In contrast to the earlier moments of the scene, where Paul and Camille are in the frame together, as the scene progresses, the characters are either isolated from each other or obstructed with objects. In a specific instance, a wall in their living room separates the characters. This signifies the distance that exists between the characters in their home.

In their final conversation together on the blue chairs, a lamp separates them, as if to act as a divider in the frame. The characters at this point exist within their individual frames; the camera pans from one close-up of a character onto another, as the characters are no longer part of the same “image.” The lamp, which turns on and off, becomes a representation of how unstable their love is/was; much like the lamp that turns on and off, their fights would resolve then resume without hesitation. Camille, however, is never able to find a true escape. The private spaces she occupies after the two fights never become a solution. In the end of the scene, she runs into the outside world and jumps into a car; she once again inhabits another form of space. The notion of escaping continues on for the rest of the film, until Camille finds escape in the form of death, which occurs in a red sports car. INT

Le mépris (1963). Director: Jean-Luc Godard. Interiors is a monthly journal where we analyze and diagram the space of certain films. (Scene:...

Le mépris (1963). Director: Jean-Luc Godard. Interiors is a monthly journal where we analyze and diagram the space of certain films. (Scene:...