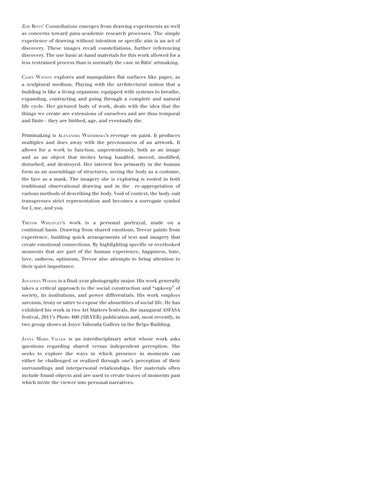 Zoë Ritts’ Constellations emerges from drawing experiments as well as concerns toward para-academic research processes. The simple experience of drawing without intention or specific aim is an act of discovery. These images recall constellations, further referencing discovery. The use basic at-hand materials for this work allowed for a less restrained process than is normally the case in Ritts’ artmaking. Casey Watson explores and manipulates flat surfaces like paper, as a sculptural medium. Playing with the architectural notion that a building is like a living organism: equipped with systems to breathe, expanding, contracting and going through a complete and natural life cycle. Her pictured body of work, deals with the idea that the things we create are extensions of ourselves and are thus temporal and finite - they are birthed, age, and eventually die. Printmaking is Alexandra Wizimirska’s revenge on paint. It produces multiples and does away with the preciousness of an artwork. It allows for a work to function, unpretentiously, both as an image and as an object that invites being handled, moved, modified, disturbed, and destroyed. Her interest lies primarily in the human form as an assemblage of structures, seeing the body as a costume, the face as a mask. The imagery she is exploring is rooted in both traditional observational drawing and in the re-appropriation of various methods of describing the body. Void of context, the body-suit transgresses strict representation and becomes a surrogate symbol for I, me, and you. Trevor Wheatley’s work is a personal portrayal, made on a continual basis. Drawing from shared emotions, Trevor paints from experience, building quick arrangements of text and imagery that create emotional connections. By highlighting specific or overlooked moments that are part of the human experience, happiness, hate, love, sadness, optimism, Trevor also attempts to bring attention to their quiet importance. Jonathan Woods is a final-year photography major. His work generally takes a critical approach to the social construction and “upkeep” of society, its institutions, and power differentials. His work employs sarcasm, irony or satire to expose the absurdities of social life. He has exhibited his work in two Art Matters festivals, the inaugural ASFASA festival, 2011’s Photo 400 (SILVER) publication and, most recently, in two group shows at Joyce Yahouda Gallery in the Belgo Building. Janna Maria Vallee is an interdisciplinary artist whose work asks questions regarding shared versus independent perception. She seeks to explore the ways in which presence in moments can either be challenged or realized through one’s perception of their surroundings and interpersonal relationships. Her materials often include found objects and are used to create traces of moments past which invite the viewer into personal narratives.

Interfold Magazine is a fine arts publication at Concordia University that acts as an exhibition within a magazine curated around a theme. The biannual publication seeks to represent the variety of art practices within the Faculty of Fine Arts. The theme of this issue is confines. 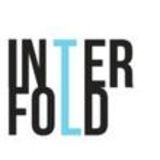