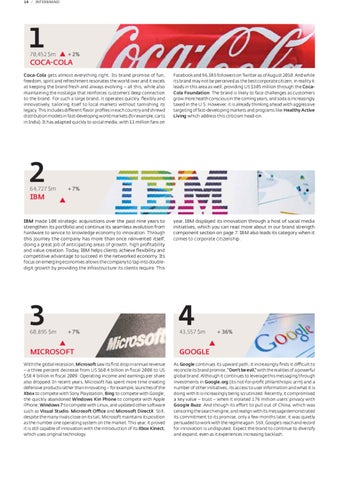 COCA-COLA Coca-Cola gets almost everything right. Its brand promise of fun, freedom, spirit and refreshment resonates the world over and it excels at keeping the brand fresh and always evolving – all this, while also maintaining the nostalgia that reinforces customers’ deep connection to the brand. For such a large brand, it operates quickly, ﬂexibly and innovatively, tailoring itself to local markets without tarnishing its legacy. This includes different ﬂavor proﬁles in each country and shrewd distribution models in fast-developing world markets (for example, carts in India). It has adapted quickly to social media, with 11 million fans on

Facebook and 96,385 followers on Twitter as of August 2010. And while its brand may not be perceived as the best corporate citizen, in reality it leads in this area as well, providing US $305 million through the CocaCola Foundation. The brand is likely to face challenges as customers grow more health conscious in the coming years, and soda is increasingly taxed in the U.S. However, it is already thinking ahead with aggressive targeting of fast-developing markets and programs like Healthy Active Living which address this criticism head-on.

IBM made 108 strategic acquisitions over the past nine years to strengthen its portfolio and continue its seamless evolution from hardware to service to knowledge economy to innovation. Through this journey the company has more than once reinvented itself, doing a great job of anticipating areas of growth, high proﬁtability and value creation. Today, IBM helps clients achieve ﬂexibility and competitive advantage to succeed in the networked economy. Its focus on emerging economies allows the company to tap into doubledigit growth by providing the infrastructure its clients require. This

MICROSOFT With the global recession, Microsoft saw its ﬁrst drop in annual revenue – a three percent decrease from US $60.4 billion in ﬁscal 2008 to US $58.4 billion in ﬁscal 2009. Operating income and earnings per share also dropped. In recent years, Microsoft has spent more time creating defensive products rather than innovating – for example, launches of the Xbox to compete with Sony Playstation, Bing to compete with Google, the quickly abandoned Windows Kin Phone to compete with Apple iPhone, Windows 7 to compete with Linux, and updated other software such as Visual Studio, Microsoft Office and Microsoft DirectX. Still, despite the many rivals close on its tail, Microsoft maintains its position as the number one operating system on the market. This year, it proved it is still capable of innovation with the introduction of its Xbox Kinect, which uses original technology.

year, IBM displayed its innovation through a host of social media initiatives, which you can read more about in our brand strength component section on page 7. IBM also leads its category when it comes to corporate citizenship.

GOOGLE As Google continues its upward path, it increasingly ﬁnds it difficult to reconcile its brand promise, “Don’t be evil,” with the realities of a powerful global brand. Although it continues to leverage this messaging through investments in Google.org (its not-for-proﬁt philanthropic arm) and a number of other initiatives, its access to user information and what it is doing with it is increasingly being scrutinized. Recently, it compromised a key value – trust – when it violated 176 million users’ privacy with Google Buzz. And though its effort to pull out of China, which was censoring the search engine, and realign with its message demonstrated its commitment to its promise, only a few months later, it was quietly persuaded to work with the regime again. Still, Google’s reach and record for innovation is undisputed. Expect the brand to continue to diversify and expand, even as it experiences increasing backlash.

The Definitive Guide to the Most Valuable Brands 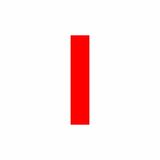