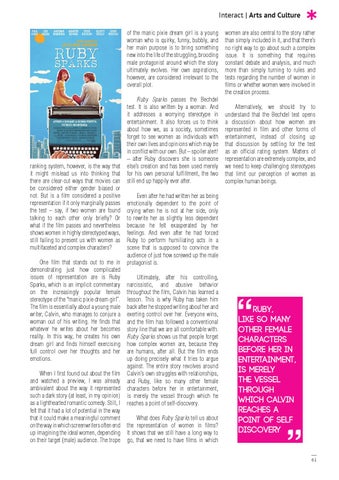 Interact | Arts and Culture of the manic pixie dream girl is a young woman who is quirky, funny, bubbly, and her main purpose is to bring something new into the life of the struggling, brooding male protagonist around which the story ultimately evolves. Her own aspirations, however, are considered irrelevant to the overall plot.

ranking system, however, is the way that it might mislead us into thinking that there are clear-cut ways that movies can be considered either gender biased or not. But is a film considered a positive representation if it only marginally passes the test – say, if two women are found talking to each other only briefly? Or what if the film passes and nevertheless shows women in highly stereotyped ways, still failing to present us with women as multifaceted and complex characters? One film that stands out to me in demonstrating just how complicated issues of representation are is Ruby Sparks, which is an implicit commentary on the increasingly popular female stereotype of the “manic pixie dream girl”. The film is essentially about a young male writer, Calvin, who manages to conjure a woman out of his writing. He finds that whatever he writes about her becomes reality. In this way, he creates his own dream girl and finds himself exercising full control over her thoughts and her emotions. When I first found out about the film and watched a preview, I was already ambivalent about the way it represented such a dark story (at least, in my opinion) as a lighthearted romantic comedy. Still, I felt that it had a lot of potential in the way that it could make a meaningful comment on the way in which screenwriters often end up imagining the ideal women, depending on their target (male) audience. The trope

Ruby Sparks passes the Bechdel test. It is also written by a woman. And it addresses a worrying stereotype in entertainment. It also forces us to think about how we, as a society, sometimes forget to see women as individuals with their own lives and opinions which may be in conflict with our own. But – spoiler alert! – after Ruby discovers she is someone else’s creation and has been used merely for his own personal fulfillment, the two still end up happily ever after.

women are also central to the story rather than simply included in it, and that there’s no right way to go about such a complex issue. It is something that requires constant debate and analysis, and much more than simply turning to rules and tests regarding the number of women in films or whether women were involved in the creation process. Alternatively, we should try to understand that the Bechdel test opens a discussion about how women are represented in film and other forms of entertainment, instead of closing up that discussion by settling for the test as an official rating system. Matters of representation are extremely complex, and we need to keep challenging stereotypes that limit our perception of women as complex human beings.

Even after he had written her as being emotionally dependent to the point of crying when he is not at her side, only to rewrite her as slightly less dependent because he felt exasperated by her feelings. And even after he had forced Ruby to perform humiliating acts in a scene that is supposed to convince the audience of just how screwed up the male protagonist is. Ultimately, after his controlling, narcissistic, and abusive behavior throughout the film, Calvin has learned a lesson. This is why Ruby has taken him back after he stopped writing about her and exerting control over her. Everyone wins, and the film has followed a conventional story line that we are all comfortable with. Ruby Sparks shows us that people forget how complex women are, because they are humans, after all. But the film ends up doing precisely what it tries to argue against. The entire story revolves around Calvin’s own struggles with relationships, and Ruby, like so many other female characters before her in entertainment, is merely the vessel through which he reaches a point of self-discovery. What does Ruby Sparks tell us about the representation of women in films? It shows that we still have a long way to go, that we need to have films in which

Ruby, Like so many other female characters before her in entertainment, is merely the vessel through which Calvin reaches a point of self discovery 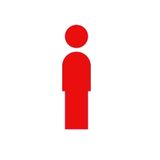