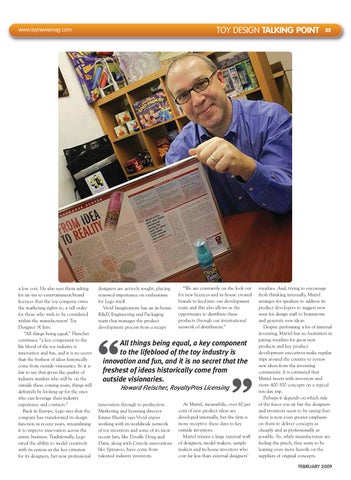 a low cost. He also sees them asking for tie-ins to entertainment/brand licences that the toy company owns the marketing rights to, a tall order for those who wish to be considered within the manufacturers’ Toy Designer ‘A’ lists. “All things being equal,” Fleischer continues, “a key component to the life blood of the toy industry is innovation and fun, and it is no secret that the freshest of ideas historically come from outside visionaries. So it is fair to say that given the quality of industry insiders who will be on the outside these coming years, things will definitely be looking up for the ones who can leverage their industry experience and contacts.” Back in Europe, Lego says that the company has transformed its design function in recent years, streamlining it to improve innovation across the entire business. Traditionally, Lego rated the ability to model creatively with its system as the key criterion for its designers, but now professional

designers are actively sought, placing renewed importance on enthusiasm for Lego itself. Vivid Imaginations has an in-house R&D, Engineering and Packaging team that manages the product development process from concept

“We are constantly on the look out for new licences and in-house created brands to feed into our development team and this also allows us the opportunity to distribute these products through our international network of distributors.”

All things being equal, a key component to the lifeblood of the toy industry is innovation and fun, and it is no secret that the freshest of ideas historically come from outside visionaries. Howard Fleischer, RoyaltyPros Licensing innovation through to production. Marketing and licensing director Emma Sherski says Vivid enjoys working with its worldwide network of toy inventors and some of its most recent hits, like Doodle Doug and Daisy, along with Crayola innovations like Spinaroo, have come from talented industry inventors.

At Mattel, meanwhile, over 80 per cent of new product ideas are developed internally, but the firm is more receptive these days to key outside inventors. Mattel retains a large internal staff of designers, model makers, sample makers and in-house inventors who cost far less than external designers’

royalties. And, trying to encourage fresh thinking internally, Mattel arranges for speakers to address its product developers to suggest new ways for design staff to brainstorm and generate new ideas. Despite performing a lot of internal inventing, Mattel has no hesitation in paying royalties for great new products and key product development executives make regular trips around the country to review new ideas from the inventing community. It is estimated that Mattel meets with inventors and views 400-500 concepts on a typical ten-day trip. Perhaps it depends on which side of the fence you sit but the designers and inventors seem to be saying that there is now even greater emphasis on them to deliver concepts as cheaply and as professionally as possible. So, while manufacturers are feeling the pinch, they seem to be leaning even more heavily on the suppliers of original concepts. FEBRUARY 2009