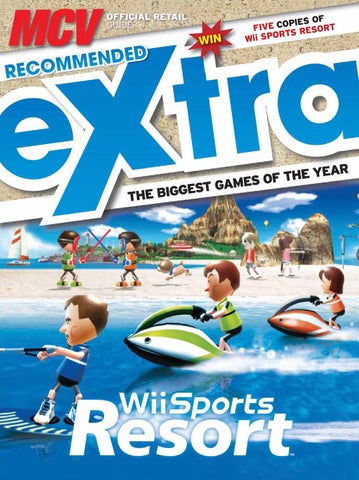 he original Wii Sports was one of the key titles in popularising what is now the most successful hardware format in the world. For some people, it helped define the Wii itself. It managed to show consumers instantly and instinctively that the format was all about fun for everyone, and also illustrate the new and unique method of physical control via the Wii Remote. Wii Sports Resort, the second major multi-event title for the platform, is a truly ‘second generation’ title, offering players a more varied line-up of sports and competitions, as well as utilising the Wii MotionPlus accessory which

provides the most responsive and realistic experience possible. One of the most noticeable differences straight out of the box is that there are twice as many sports – 12 compared to six. And within each one there are often plenty of different styles and gameplay options, so it’s a far broader and more diverse experience. Wii Sports Resort takes place on Wuhu Island and is packed with things to do. Activities include Archery, Frisbee, Basketball, Cycling, Canoeing, Power Cruising, Table Tennis, Air Sports, Bowling, Swordplay, Golf and Wakeboarding. In every case, the Wii MotionPlus helps to recreate the physical reality

of the actual sport, giving players the sensation of smashing one down the fairway, slamming a basket or firing an arrow straight into the bullseye. The controller picks up every nuance of a player’s movement and translates it onto the screen. The difference is brought into sharp focus in Archery, for instance, when every single twitch or tremor changes the direction of the arrow and can result in a miss. This is phase two of the revolution that began with Wii and is now becoming industry standard – just as Nintendo moves things on still further. All the different sports use the controllers differently, and some make

use of the Nunchucks as well as the Remote. In Canoeing, for example, players hold the Remote on its own, like a paddle, while in Cycling they hold the Remote in one hand, the Nunchuck in the other and ‘pedal’ like crazy with both arms. One really different activity falls under the banner of Air Sports. This involves flying round the island, doing a spot of competitive sightseeing and using the Wii Remote like a paper plane. As with Wii Sports, the menu system is really simple. It is controlled by pointing at the screen, making it easy to jump in and out of each sport.

PLUS POINTS Wii MotionPlus is a new accessory which takes the motion-sensing control of the Wii Remote to new levels of precision and performance. It comes bundled with Wii Sports Resort – and the new title perfectly showcases the huge jump forward in gameplay experience that the Wii MotionPlus makes possible. One of the sports that perhaps highlights the improvements more than any other is Archery. The slightest, and we mean slightest, movement of your hand will be reflected on screen and hitting the target calls for absolute precision. The launch of Wii MotionPlus is a new chapter in the success story of the Wii, and Wii Sports Resort is where that chapter starts.

the biggest launch Wii Sports Resort will be backed by tory. It will utilise many campaign in Nintendo's recent his ee months, only fitting forms of media and run across thr e... for this fantastic new Nintendo titl G TV will kick The Wii Sports Resort TV campaign three for run will and July 6th off w/c months. The whole campaign will deliver more off it will than 1,250 TVRs. When the TV kicks ring no have clear pre-order messaging ensu ch. In laun at se relea this on out es miss one the ive, creat rder addition to the pre-o great campaign will go on to show off the and rt Reso ts Spor Wii in re featu sports that played the precision in which these can be us. through the support of Wii MotionPl The TV creative will see some great sporting professionals show you the Kendo, precision required for Table Tennis, rt. The Golf and Archery on Wii Sports Reso see these will aign camp the of e phas nd seco other each st again g petin professionals com ng showing the fun to be had when playi multiplayer on Wii Sports Resort. with The TV will target 16-44 yr olds and in all ars appe it that re ensu will TVRs 1,250 ghout major prime time family viewing throu the summer.

G ONLINE over by All major gaming sites will be taken this launch, as well as MSN. ct and The online takeovers will create impa ts that spor of array an ing entertainment show e feature in Wii Sports Resort. The onlin million campaign will deliver more than 4.3 launch. impressions across the two weeks of

G CINEMA Wii this The biggest family game launch on the in re featu se, cour of summer should, biggest film launch of the summer. fun So cinema goers will get to see the ts Resort and precision to be had on Wii Spor as part of Harry Potter and the Half Blood er Prince. The cinema campaign will deliv more than 5.1 million admissions. G PRINT s of stores When Wii Sports Resort hits the selve s. stand news the hit also on 24th July it will that A major press takeover will ensure umers everyone is aware of the launch. Cons o, Daily will see a coverwrap takeover on Metr In ch. laun of day on tlist Shor and Star ch, addition to coverwraps on day of laun in Sport advertorials will be used to educate and the Observer Sport.

G SAMPLING way Wuhu Island will also be making its ling samp r majo a in try coun around the rtunity campaign, giving everyone the oppo and rt, Reso ts Spor Wii with grips to to get rience experience the advanced control expe from Wii MotionPlus. u The Sampling rig is themed like Wuh Island. It offers more that ten gameplay areas, and will visit nine locations this deliver summer. The sampling campaign will rt as it more than samples of Wii Sports Reso travels the country. G POS off A dual phased POS campaign will kick ness POS in-store from 13th July with pre-aware July. followed by launch POS from the 24th for An array of POS items will be available ow Wind h. launc the ort supp to lers retai s and posters, FSDUs, wobblers, deco cube ler’s much more will ensure that every retai h. launc at d Islan u Wuh like store feels

ople and rt out to meet the pe so Re ts or Sp ii W ng Nintendo is taki fun around the UK... enjoy a summer of

The TV ad makes it clear that every single movement players make, even the slightest twitch, is picked up by the new MotionPlus technology and translated onto the screen in sports such as Archery and Table Tennis

Could you give us some background on the success of Wii Sports? Wii Sports is now the most played game in the world - and has a global installed base of over 45m, with almost 6m of those coming from the UK. It is still one of the most played games on Wii, and has one of the highest satisfaction levels across all our games. A common misconception is that Wii Sports is a game for nongamers – in fact the title has an incredible amount of depth, and is loved by everyone, no matter what their gaming experience. This universal appeal has been replicated in Wii Sports Resort, whilst Wii MotionPlus takes gameplay to the next level of accuracy and control.

How important was Wii Sports in defining and showcasing the Wii back when it was still seen as something very different and outside people's realm of experience? Every new console needs a killer app, or a piece of software that defines the console - for the DS it was Brain Training, for Wii it was Wii Sports. It completely explained what Wii was about from the moment you had your first go on Wii Sports Tennis even people sceptical about games couldn't help but smile. The feeling you get when you play Canoeing or Table Tennis on Wii Sports Resort for the first time is almost identical to this - which is a fantastic commendation for the product.

Will Wii Sports do the same sort of evangelical job for Wii MotionPlus, i.e. make people realise how indispensable it is to a new generation of games? Absolutely - although Grand Slam Tennis, Virtua Tennis and Tiger Woods 10 are all great examples of Wii MotionPlus enhancing and improving gameplay as well. Wii Sports Resort can only be played with MotionPlus, which should ensure it reaches a broad audience - and once they get their hands on it, they will realise straight away how sensitive it is, and how much extra control it allows. What are the major steps forward Sports Resort has over Wii Sports?

To celebrate the imminent launch of the biggest Wii game of the year, Nintendo is giving you the chance to win five copies of Wii Sports Resort. To secure your place on the starting line, simply answer the following question:

LOWE: “Once players get their hands on Wii Sports Resort they will realise straight away how sensitive it is and how much extra control it allows.”

The best way to compare is to play Bowling and Golf on Wii Sports, and then try them out on Wii Sports Resort - the extra level of control is amazing, especially on Golf, where every slight draw or fade, slice or hook is replicated on the screen. There are also ten more brand new sports. At the moment our favourite in the office is Archery, which requires a very steady hand (which are in short supply at Nintendo UK!) Which sports do you think will grab players’ imaginations? All of them are great - but watching four people taking part in a Canoeing race is hilarious, and will be the

highlight of many late night Wii sessions over ths summer. How big is Wii Sports Resort in terms of its importance in 2009’s release schedule? It's the biggest launch on Wii this year. We're re-promoting it heavily at Christmas and next year as well.

websites, as well as a cinema campaign alongside Harry Potter. Below the line we have one of our biggest ever sampling campaigns planned in, based around a beach resort theme, as well as a massive PR push. I’d say it's probably the biggest campaign I've ever been involved with.

How big a marketing campaign is being put behind the release? It's the biggest launch campaign in Nintendo's recent history, with a huge TV campaign running over three months, a print campaign which will include cover-wraps on the Daily Star, Metro and Shortlist, an online takeover on MSN and all the major gaming

What is the central message of the campaign? We have decided to slightly move away from the ‘Wii Family around the sofa’ style of advertising, and are now showing Sporting Champions from around Europe trying out their expertise on Wii Sports Resort. The initial cuts look fantastic, and we

hope it will gain major cut through to our broad Wii audience. What sort of audience are you targeting through which type of media? We'll be targeting a really broad audience as Wii Sports Resort really is for anyone - from kids to grandparents, from new gamers to the most experienced - it's got something for everyone. What are the sales expectations for Wii Sports Resort? We are hoping to break the records set by Mario Kart Wii and then Wii Fit, and achieve a number one in both the All Formats and the Wii chart.

Retails guide to the biggest games of the year

Retails guide to the biggest games of the year