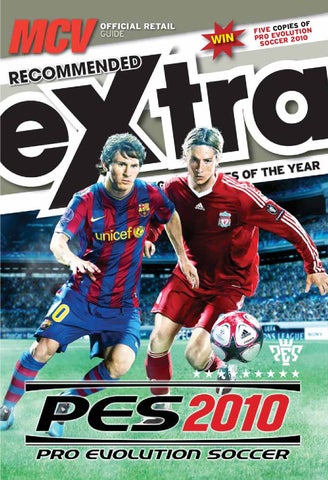 PES 2010 arrives on October 23rd – having been overhauled, improved and generally polished within an inch of its life, not just by the dev team, but by fans and players themselves. PES Productions, the Tokyo-based studio behind the series, took into account hundreds of comments and suggestions from thousands of consumers (hardcore and casual) and, along with press feedback, used them to help shape and create the best PES game ever. This season’s highlights include…  Gameplay – The focus is on the excitement of matches between players, with a host of enhancements generating a complete and constant 22-man experience. Intuitive zonal defending covers spaces and forces players to look for new angles of attack. PES 2010 requires the perfect combination of strategy, speed and skill and is a true football simulation.  Visuals – PES 2010 has undergone a major visual revamp, with the level of detail and expressiveness of players’ faces resulting in very close likenesses. There’s also an improved lighting system which differentiates between various conditions.  Animations – Animations now dovetail into each other. He dribbles, he shoots, he scores, all in one seamless movement. There’s also scope for showing off skills, tricks and flicks, all of which, deployed smartly, can change a game.  Atmosphere – Crowd reactions are far more varied, with loads of new chants and cheers. There’s also a different atmosphere for home and away matches.  Enhanced Master League – Upgraded and expanded to include more managerial elements, which enable players to take charge of teams for longer periods and really make their mark on a club. There is also a contingency whereby clubs saddled with debt get a stay of execution and continue to operate. The leagues offer more depth than ever before and assimilate Europa Cup and Champions League campaigns.  AI – Teamvision 2.0 has been implemented. Defensive players now work together to cover spaces and provide a more formidable barrier than ever, demanding greater skill and imagination from the attacking team. There are no more soft goals. They don’t just have to be scored anymore, they have to be earned.  Individual Play Characteristics – Players’ behaviour and movement on the pitch is no longer dictated purely by team formations. They will also attack and defend in accordance with their individual characteristics  Strategy – Every tactical nuance can be adjusted prior to kick-off or at any time during the game.  Penalties – England fans rejoice, penalties are now less of a lottery, with PES 2010 offering greater control over placing and accuracy.

Don’t call it a comeback. PES never went away. But there’s definitely a feeling that PES 2010 is a stunning return to form. Euro team leader Jon Murphy talks about the tactics and team behind a winning game… Would you concede that having been the original ‘gamers’ game’ you lost some ground to FIFA in the last couple of years? I think that the transition to next gen has not been as easy as we thought. With the advantages of the new hardware, it has taken a while for the development team to realise what it is capable of and how to implement it. I think it takes a few years for teams to get the most out of hardware, and the Tokyo team has found its feet now. How have you turned that round and how do you see the competitive landscape now? The PES 2010 team is now much larger, and split into more logical groups – most working on the current iteration, some working on ‘blue sky thinking’ elements for future versions. EA has had a larger team, so it is fair to say it’s benefited in the meantime, but I think from now on it will be a more level playing field. In which areas do you think PES needed to improve and how have they been addressed? We needed to listen, basically. We needed to hear what the fan base wanted from the game. And, yes, this has been addressed. The 360-degree control, focus on simulation, massively enhanced Master League and much improved visuals are all testament to this, as are loads of small touches, such as animations and untucked shirts. The devil is in the detail and the PES community has really helped us appreciate that. Do you think this will be the biggest-selling PES game to date? It is by far the most accomplished to date, so I would hope so. What does your choice of cover stars say about PES? They scream quality and they show that those who appreciate the skill, pace and the unexpected brilliance that a match can create are in safe hands. Messi and Torres are clever, intuitive players. PES is a clever, intuitive game.

What’s the headline message of your marketing? It’s all about ‘you make the moment’, which acknowledges the importance of our fans while celebrating all the glorious moments unique to PES. What are your expectations for this title? PES 2010 comes with a massive weight of expectation. For the last year, we have worked extremely closely with the PES fan base to determine what the key factors they want from their game are. These have been submitted to Japan, where the team has been incredibly responsive and produced a game that returns to the PES series’ simulation origins, while adding a wealth of new additions. Key factors include 360-degree control, simpler tactical systems, greater responsiveness in terms of control, the most accuratelooking and moving player models to date, and improvements to the online and Master League elements. Initial responses from those who have seen PES 2010 have been extremely positive and the new game marks a stunning return to form for the series. What should retailers expect? A strong, refined product that will sell and sell. PES 2010 is an incredibly strong football title, with good brand recognition – and very high production values. The photo-realistic visuals and stunning animation work showcase a game that looks breathtaking, while the gameplay is stronger than ever, with a more realistic pace and total control. PES is one of those games that, once sampled, grabs you like no other. It will be backed up by a far-ranging marketing and PR campaign, and will enjoy an extremely high profile at launch and beyond. What is this game’s defining feature? PES is all about gameplay. While PES 2010 is easily the bestlooking football title available, it is the core gameplay that sets it apart. Its new pace makes for a passing game, where the player AI comes into its own. Passing, spreading the ball around, and making runs is integral to playing the game well, and PES 2010’s players react and move just like the pros they are based on. PES has long been the post-pub game of choice, and PES 2010 will once again see arms bruised, voices raised, and jostling and gloating galore as its gameplay is enjoyed.

MEDIA WATCH “PES STRIKES BACK! The best-looking PES yet... it’s looking like PES will have the bragging rights...” GAMESMASTER

“PES could be set for a big season... 360degree movement is a huge inclusion. Kudos to Konami.” OFFICIAL PS3

“PES 2010 is way better than last year’s game for player likenesses.” MATCH OF THE DAY

MARKETING PES 2010 is a huge product for Konami, for the industry and for the franchise. The dev team has done its job by delivering the best game yet and now the marketing team is about to weigh in with a suitably impressive campaign across a wide variety of media... PRINT An extensive campaign that spans the key specialist titles (OPM, OXM, etc), football and mainstream press, and national press, including wraps and takeover pages at launch with Sport, Shortlist and Metro. Reviews will appear extensively before and after launch, with initial response from all sectors universally positive. Konami is also working very closely with Liverpool and Manchester United in promotions of the game, and PES 2010 continues the publisher’s close relationship with the FA as the official game of the England team. TV An ad showcasing pack stars Lionel Messi and Fernando Torres has been created. It also features the winners of the pan-European ‘PES Star’ campaign, wherein die-hard fans of the PES series will appear in the ad , celebrating their part in making PES moments of genius. It will run from 21/10 – 15/11, hitting Channel 4, ITV, E4 Sky Sports

and various other channels. It will be seen by 8.6 million 16 to 34-year-olds. POS Posters, over-sized boxes and standees of the two cover stars available. OUTDOOR Hoardings are in place at Premiership grounds and have been since the season started. A poster and bus campaign is also planned to support retail through December. ONLINE Takeovers and MPUs planned for Eurogamer, IGN, Gamespot, CVG and Gamesradar from 12/10 – 30/10. The campaign will deliver 4.2 million impressions to 1.1 million individuals. RADIO A strong campaign will feature on Kerrang and Kiss from 07/10 – 23/10, plus campaigns and promotions with individual presenters, inlcuding Jez Welhan.

“A deeper, longer-lasting experience... graphics are amazing, and almost photo quality.” THE SUN

To celebrate the launch of PES 2010, Konami is giving five of you the chance to win a copy on the format of your choice. To get your name in the hat, simply answer the following question:

Q. What is Lionel Messiâ&#x20AC;&#x2122;s nickname? A. The Flea B. The Elephant C: The Zebra Send your answer to pes@intentmedia.co.uk

Retail's guide to the biggest games of the year

Retail's guide to the biggest games of the year