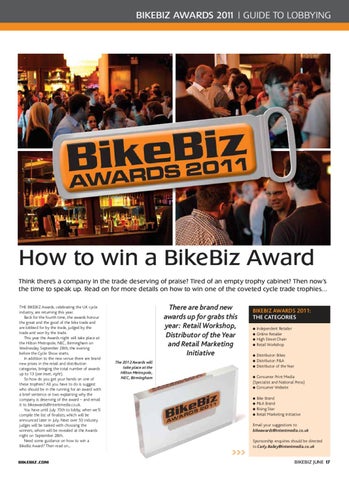 How to win a BikeBiz Award Think there’s a company in the trade deserving of praise? Tired of an empty trophy cabinet? Then now’s the time to speak up. Read on for more details on how to win one of the coveted cycle trade trophies... THE BIKEBIZ Awards, celebrating the UK cycle industry, are returning this year. Back for the fourth time, the awards honour the great and the good of the bike trade and are lobbied for by the trade, judged by the trade and won by the trade. This year the Awards night will take place at the Hilton Metropole, NEC, Birmingham on Wednesday September 28th, the evening before the Cycle Show starts. In addition to the new venue there are brand new prizes in the retail and distribution categories, bringing the total number of awards up to 13 (see inset, right). So how do you get your hands on one of these trophies? All you have to do is suggest who should be in the running for an award with a brief sentence or two explaining why the company is deserving of the award – and email it to bikeawards@intentmedia.co.uk. You have until July 15th to lobby, when we’ll compile the list of finalists, which will be announced later in July. Next over 50 industry judges will be tasked with choosing the winners, whom will be revealed at the Awards night on September 28th. Need some guidance on how to win a BikeBiz Award? Then read on...

There are brand new awards up for grabs this year: Retail Workshop, Distributor of the Year and Retail Marketing Initiative

The 2012 Awards will take place at the Hilton Metropole, NEC, Birmingham

For Everyone in the Bike Business