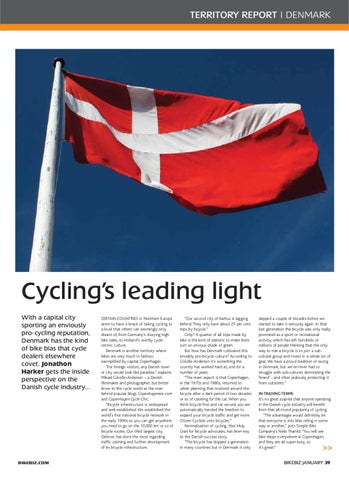 Cycling’s leading light With a capital city sporting an enviously pro-cycling reputation, Denmark has the kind of bike bias that cycle dealers elsewhere covet. Jonathon Harker gets the inside perspective on the Danish cycle industry...

CERTAIN COUNTRIES in Northern Europe seem to have a knack of taking cycling to a level that others can seemingly only dream of, from Germany’s dizzying high bike sales, to Holland’s overtly cyclecentric culture. Denmark is another territory where bikes are very much in fashion, exemplified by capital Copenhagen. “For foreign visitors, any Danish town or city would look like paradise,” explains Mikael Colville-Andersen – a Danish filmmaker and photographer, but better know to the cycle world as the man behind popular blogs Copenhagenize.com and Copenhagen Cycle Chic. “Bicycle infrastructure is widespread and well-established. We established the world's first national bicycle network in the early 1990s so you can get anywhere you need to go on the 10,000 km or so of bicycle routes. Our third largest city, Odense, has done the most regarding traffic calming and further development of its bicycle infrastructure.

“Our second city of Aarhus is lagging behind. They only have about 25 per cent trips by bicycle.” Only? A quarter of all trips made by bike is the kind of statistic to make Boris turn an envious shade of green. But how has Denmark cultivated this enviably pro-bicycle culture? According to Colville-Andersen it’s something the country has worked hard at, and for a number of years. “The main aspect is that Copenhagen, in the 1970s and 1980s, returned to urban planning that revolved around the bicycle after a dark period of two decades or so of catering for the car. When you think bicycle first and car second you are automatically handed the freedom to expand your bicycle traffic and get more Citizen Cyclists onto bicycles.” Normalisation of cycling, that Holy Grail for bicycle advocates, has been key to the Danish success story. “The bicycle has skipped a generation in many countries but in Denmark it only

skipped a couple of decades before we started to take it seriously again. In that lost generation the bicycle was only really promoted as a sport or recreational activity, which has left hundreds of millions of people thinking that the only way to ride a bicycle is to join a subcultural group and invest in a whole lot of gear. We have a proud tradition of racing in Denmark, but we've never had to struggle with sub-cultures dominating the 'brand' - and often jealously protecting it from outsiders.” IN TRADING TERMS It’s no great surprise that anyone operating in the Danish cycle industry will benefit from that all-round popularity of cycling. “The advantages would definitely be that everyone is into bike riding in some way or another,” puts Simple Bike Company’s Niels Thanild. “You will see bike shops everywhere in Copenhagen, and they are all super-busy, so it's great!”