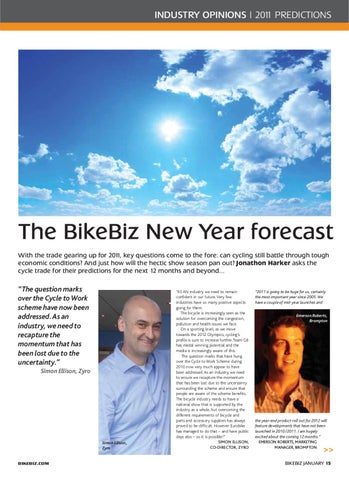 The BikeBiz New Year forecast With the trade gearing up for 2011, key questions come to the fore: can cycling still battle through tough economic conditions? And just how will the hectic show season pan out? Jonathon Harker asks the cycle trade for their predictions for the next 12 months and beyond...

“The question marks over the Cycle to Work scheme have now been addressed. As an industry, we need to recapture the momentum that has been lost due to the uncertainty.” Simon Ellison, Zyro

“AS AN industry we need to remain confident in our future. Very few industries have so many positive aspects going for them. The bicycle is increasingly seen as the solution for overcoming the congestion, pollution and health issues we face. On a sporting level, as we move towards the 2012 Olympics, cycling’s profile is sure to increase further. Team GB has medal winning potential and the media is increasingly aware of this. The question marks that have hung over the Cycle to Work Scheme during 2010 now very much appear to have been addressed. As an industry, we need to ensure we recapture the momentum that has been lost due to the uncertainty surrounding the scheme and ensure that people are aware of the scheme benefits. The bicycle industry needs to have a national show that is supported by the industry as a whole, but overcoming the different requirements of bicycle and parts and accessory suppliers has always proved to be difficult. However Eurobike has managed to do that – and have public days also – so it is possible!” SIMON ELLISON, CO-DIRECTOR, ZYRO

“2011 is going to be huge for us, certainly the most important year since 2005. We have a couple of mid-year launches and Emerson Roberts, Brompton

the year-end product roll out for 2012 will feature developments that have not been launched in 2010 /2011. I am hugely excited about the coming 12 months.” EMERSON ROBERTS, MARKETING MANAGER, BROMPTON