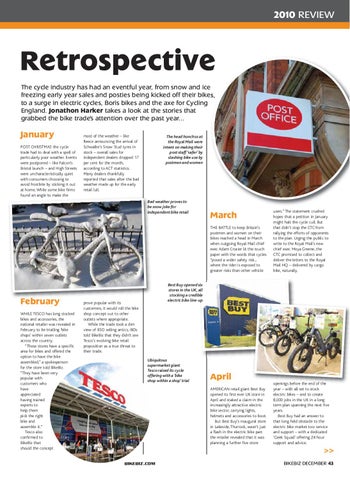 Retrospective The cycle industry has had an eventful year, from snow and ice freezing early year sales and posties being kicked off their bikes, to a surge in electric cycles, Boris bikes and the axe for Cycling England. Jonathon Harker takes a look at the stories that grabbed the bike trade’s attention over the past year...

January POST CHRISTMAS the cycle trade had to deal with a spell of particularly poor weather. Events were postponed – like Falcon’s Bristol launch – and High Streets were uncharacteristically quiet with consumers choosing to avoid frostbite by sticking it out at home. While some bike firms found an angle to make the

most of the weather – like Reece announcing the arrival of Schwalbe’s Snow Stud tyres in stock – overall sales for independent dealers dropped 17 per cent for the month, according to ACT statistics. Many dealers thankfully reported that sales after the bad weather made up for the early retail lull.

March THE BATTLE to keep Britain’s postmen and women on their bikes reached a head in March when outgoing Royal Mail chief exec Adam Crozier lit the touch paper with the words that cycles “posed a wider safety risk... where the rider is exposed to greater risks than other vehicle

February WHILE TESCO has long stocked bikes and accessories, the national retailer was revealed in February to be trialling ‘bike shops’ within seven outlets across the country. “These stores have a specific area for bikes and offered the option to have the bike assembled,” a spokesperson for the store told BikeBiz. “They have been very popular with customers who have appreciated having trained experts to help them pick the right bike and assemble it.“ Tesco also confirmed to BikeBiz that should the concept

users.” The statement crushed hopes that a petition in January might halt the cycle cull. But that didn’t stop the CTC from rallying the efforts of opponents to the plan. Urging the public to write to the Royal Mail’s new chief exec Moya Greene, the CTC promised to collect and deliver the letters to the Royal Mail HQ – delivered by cargo bike, naturally.

prove popular with its customers, it would roll the bike shop concept out to other outlets where appropriate. While the trade took a dim view of BSO selling antics, IBDs told BikeBiz that they didn’t see Tesco’s evolving bike retail proposition as a true threat to their trade.

April AMERICAN retail giant Best Buy opened its first ever UK store in April and staked a claim in the increasingly attractive electric bike sector, carrying lights, helmets and accessories to boot. But Best Buy’s inaugural store in Lakeside, Thurrock, wasn’t just a flash in the electric bike pan: the retailer revealed that it was planning a further five store

openings before the end of the year – with all set to stock electric bikes – and to create 8,000 jobs in the UK in a long term plan spanning the next five years. Best Buy had an answer to that long held obstacle to the electric bike market too: service and support – with a dedicated ‘Geek Squad’ offering 24 hour support and advice.

For Everyone In The Bike Business