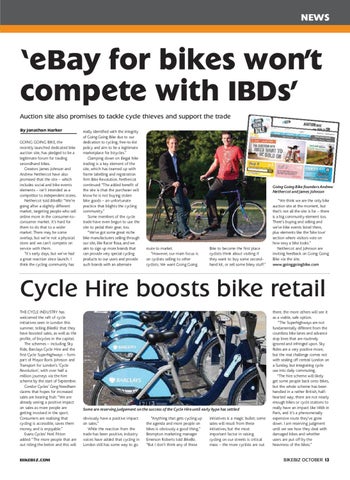 ‘eBay for bikes won’t compete with IBDs’ Auction site also promises to tackle cycle thieves and support the trade By Jonathon Harker GOING GOING BIKE, the recently launched dedicated bike auction site, has pledged to be a legitimate forum for trading secondhand bikes. Creators James Johnson and Andrew Nethercot have also promised that the site – which includes social and bike events elements – isn’t intended as a competitor to independent stores. Nethercot told BikeBiz: “We’re going after a slightly different market, targeting people who sell online more in the consumer-toconsumer market. It’s hard for them to do that to a wider market. There may be some overlap, but we’re not a physical store and we can’t compete on service with them. &quot;It&#39;s early days, but we&#39;ve had a great reaction since launch. I think the cycling community has

really identified with the integrity of Going Going Bike due to our dedication to cycling, free-to-list policy and aim to be a legitimate marketplace for bicycles.” Clamping down on illegal bike trading is a key element of the site, which has teamed up with frame labelling and registration firm Bike Revolution. Nethercot continued: “The added benefit of the site is that the purchaser will know he is not buying stolen bike goods – an unfortunate practice that blights the cycling community.” Some members of the cycle trade have even begun to use the site to pedal their gear, too. “We&#39;ve got some great niche bike manufacturers selling through our site, like Racer Rosa, and we aim to sign up more brands that can provide very special cycling products to our users and provide such brands with an alternate

route to market. “However, our main focus is on cyclists selling to other cyclists. We want Going Going

Bike to become the first place cyclists think about visiting if they want to buy some secondhand kit, or sell some bikey stuff.&quot;

“We think we are the only bike auction site at the moment, but that’s not all the site is for – there is a big community element too. There’s buying and selling and we’ve bike events listed there, plus elements like the ‘bike love’ section where visitors vote on how sexy a bike looks.” Nethercot and Johnson are inviting feedback on Going Going Bike via the site. www.goinggoingbike.com

Cycle Hire boosts bike retail THE CYCLE INDUSTRY has welcomed the raft of cycle initiatives seen in London this summer, telling BikeBiz that they have boosted sales, as well as the profile, of bicycles in the capital. The schemes – including Sky Ride, Barclays Cycle Hire and the first Cycle Superhighways – form part of Mayor Boris Johnson and Transport for London’s ‘Cycle Revolution’, with over half a million journeys via the hire scheme by the start of September. Condor Cycles’ Greg Needham claims that hopes for increased sales are bearing fruit: “We are already seeing a positive impact on sales as more people are getting involved in the sport. Consumers are realising that cycling is accessible, saves them money, and is enjoyable.” Evans Cycles’ Neil Fitton added: “The more people that are out riding the better and this will

Some are reserving judgement on the success of the Cycle Hire until early hype has settled obviously have a positive impact on sales.” While the reaction from the trade has been positive, industry voices have added that cycling in London still has some way to go.

“Anything that gets cycling up the agenda and more people on bikes is obviously a good thing,” Brompton marketing manager Emerson Roberts told BikeBiz. “But I don’t think any of these

initiatives is a magic bullet; some sales will result from these initiatives, but the most important factor in raising cycling on our streets is critical mass – the more cyclists are out

there, the more others will see it as a viable, safe option. “The Superhighways are not fundamentally different from the countless bike lanes and advance stop lines that are routinely ignored and infringed upon. Sky Rides are a very positive move, but the real challenge comes not with sealing off central London on a Sunday, but integrating cycle use into daily commuting. “The hire scheme will likely get some people back onto bikes, but the whole scheme has been handled in a rather British, halfhearted way; there are not nearly enough bikes or cycle stations to really have an impact like Vélib in Paris, and it’s a phenomenally expensive route they’ve gone down. I am reserving judgment until we see how they deal with damaged bikes and whether users are put off by the heaviness of the bikes.”