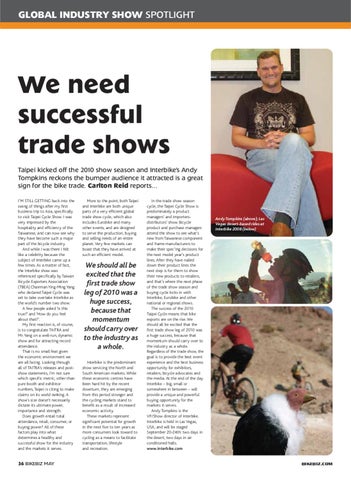 We need successful trade shows Taipei kicked off the 2010 show season and Interbike’s Andy Tompkins reckons the bumper audience it attracted is a great sign for the bike trade. Carlton Reid reports... I’M STILL GETTING back into the swing of things after my first business trip to Asia, specifically to visit Taipei Cycle Show. I was very impressed by the hospitality and efficiency of the Taiwanese, and can now see why they have become such a major part of the bicycle industry. And while I was there I felt like a celebrity because the subject of Interbike came up a few times. As a matter of fact, the Interbike show was referenced specifically by Taiwan Bicycle Exporters Association (TBEA) Chairman Ying-Ming Yang who declared Taipei Cycle was set to take overtake Interbike as the world’s number two show. A few people asked ‘Is this true?’ and ‘How do you feel about that?’. My first reaction is, of course, is to congratulate TAITRA and Mr. Yang on a well-run, dynamic show and for attracting record attendance. That is no small feat given the economic environment we are all facing. Looking through all of TAITRA’s releases and postshow statements, I’m not sure which specific metric, other than pure booth and exhibitor numbers, Taipei is citing to make claims on its world ranking. A show’s size doesn’t necessarily dictate its ultimate power, importance and strength. Does growth entail total attendance, retail, consumer, or buying power? All of these factors play into what determines a healthy and successful show for the industry and the markets it serves.

More to the point, both Taipei and Interbike are both unique parts of a very efficient global trade show cycle, which also includes Eurobike and many other events, and are designed to serve the production, buying and selling needs of an entire planet. Very few markets can boast that they have arrived at such an efficient model.

We should all be excited that the first trade show leg of 2010 was a huge success, because that momentum should carry over to the industry as a whole. Interbike is the predominant show servicing the North and South American markets. While these economic centres have been hard hit by the recent downturn, they are emerging from this period stronger and the cycling markets stand to benefit as a result of increased economic activity. These markets represent significant potential for growth in the next five to ten years as more consumers look toward to cycling as a means to facilitate transportation, lifestyle and recreation.

In the trade show season cycle, the Taipei Cycle Show is predominately a product managers’ and importersdistributors’ show. Bicycle product and purchase managers attend the show to see what’s new from Taiwanese component and frame manufacturers to make their spec’ing decisions for the next model year’s product lines. After they have nailed down their product lines the next step is for them to show their new products to retailers, and that’s where the next phase of the trade show season and buying cycle kicks in with Interbike, Eurobike and other national or regional shows. The success of the 2010 Taipei Cycle means that bike exports are on the rise. We should all be excited that the first trade show leg of 2010 was a huge success, because that momentum should carry over to the industry as a whole. Regardless of the trade show, the goal is to provide the best event experience and the best business opportunity for exhibitors, retailers, bicycle advocates and the media. At the end of the day Interbike – big, small or somewhere in between – will provide a unique and powerful buying opportunity for the markets it serves. Andy Tompkins is the VP/Show director of Interbike. Interbike is held in Las Vegas, USA, and will be staged September 20-24th: two days in the desert, two days in air conditioned halls. www.interbike.com

Andy Tompkins (above); Las Vegas desert-based rides at Interbike 2008 (below)