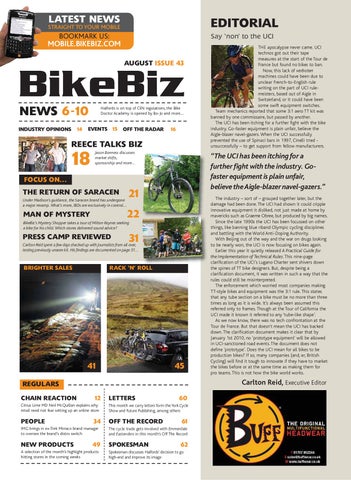 STRAIGHT TO YOUR MOBILE

Halfords is on top of CEN regulations, the Bike Doctor Academy is opened by Bo-Jo and more....

EVENTS 15 OFF THE RADAR

“The UCI has been itching for a further fight with the industry. Gofaster equipment is plain unfair, believe the Aigle-blazer navel-gazers.”

THE RETURN OF SARACEN Under Madison’s guidance, the Saracen brand has undergone a major revamp. What’s more, IBDs are exclusively in control...

BikeBiz’s Mystery Shopper takes a tour of Milton Keynes seeking a bike for his child. Which stores delivered sound advice?

Carlton Reid spent a few days shacked up with journalists from all over, testing previously unseen kit. His findings are documented on page 31...

The industry – sort of – grouped together later, but the damage had been done. The UCI had shown it could cripple innovative equipment it disliked, not just made at home by mavericks such as Graeme Obree, but produced by big names. Since the late 1990s the UCI has been focussed on other things, like banning blue riband Olympic cycling disciplines and battling with the World Anti-Doping Authority. With Beijing out of the way and the war on drugs looking to be nearly won, the UCI is now focusing on bikes again. Earlier this year it quietly released A Practical Guide for the Implementation of Technical Rules. This nine-page clarification of the UCI's Lugano Charter sent shivers down the spines of TT bike designers. But, despite being a clarification document, it was written in such a way that the rules could still be misinterpreted. The enforcement which worried most companies making TT-style bikes and equipment was the 3:1 rule. This states that any tube section on a bike must be no more than three times as long as it is wide. It's always been assumed this referred only to frames. Though at the Tour of California the UCI made it known it referred to any ‘tube-like shape’. As we now know, there was no tech confrontation at the Tour de France. But that doesn't mean the UCI has backed down. The clarification document makes it clear that by January 1st 2010, no 'prototype equipment' will be allowed in UCI-sanctioned road events. The document does not define 'prototype'. Does the UCI mean for all bikes to be production bikes? If so, many companies (and, er, British Cycling) will find it tough to innovate if they have to market the bikes before or at the same time as making them for pro teams. This is not how the bike world works.

THE apocalypse never came. UCI technos got out their tape measures at the start of the Tour de France but found no bikes to ban. Now, this lack of verboten machines could have been due to unclear French-to-English rule writing on the part of UCI rulemeisters, based out of Aigle in Switzerland, or it could have been some swift equipment switches. Team mechanics reported that some 3:1 aero TT kit was banned by one commissaire, but passed by another. The UCI has been itching for a further fight with the bike industry. Go-faster equipment is plain unfair, believe the Aigle-blazer navel-gazers. When the UCI successfully prevented the use of Spinaci bars in 1997, Cinelli tried unsuccessfully – to get support from fellow manufacturers.

This month we carry letters form the York Cycle Show and Future Publishing, among others