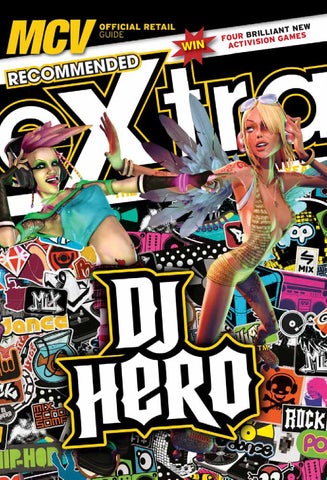 Following on from the worldwide phenomenon that is Guitar Hero®, DJ Hero™ brings the funk to provide an all-new interactive music experience. Using a unique turntable controller, players can rule the party through a combination of killer DJ techniques and classic tunes across a variety of genres. They get to play venues that range from intimate parties to giant super-clubs, mixing, sampling and scratching their way to stardom. Their weapons are their skills and the turntable, as they supply over 93 exclusive mixes from the likes of Grandmaster Flash and DJ Jazzy Jeff, blending the work of world renowned artists such as David Bowie, Marvin Gaye, Beastie Boys, Gorillaz, N.E.R.D., Nirvana and 50 Cent.

Star Wars™ The Clone Wars™ has established itself as one of the most popular spinoffs ever from the classic movie series, and the new video game will play its part in expanding the brand universe still further. Star Wars™ The Clone Wars:™ Republic Heroes™ features an original story that bridges the gap between series one and two of the phenomenally successful animated TV show (number one on Cartoon Network). As well as being a classic LucasArts platformer, it boasts prominent co-op play elements that will let players fight alongside family and friends, living out their very own Clone Wars adventures. They can play as their favourite character from the ranks of Jedi or Clone Troopers, including familiar stalwarts like Anakin, or one of the new faces, such as Captain Rex.

The original Marvel:™ Ultimate Alliance sold over four million copies worldwide and so it’s no wonder that the sequel is a highly anticipated ‘event’ release. Inspired by the acclaimed Marvel Civil War storyline, Marvel: Ultimate Alliance 2 is an action RPG with a stunning cast of superhero characters. The story starts with the Superhuman Registration Act, which states that all superheroes must be registered as weapons of mass destruction and become licensed government agents. Civil war breaks out. Iron Man leads the proregistration faction, while Captain America spearheads the anti-registration alliance. Players must choose sides and then assemble a dream team packed with super powers which can be combined and deployed to spectacular effect.

Blurâ&amp;#x201E;˘ is a racing game packed with Power-Ups from start to finish, creating an ever-changing, never predictable and lightning fast gameplay experience. Players must utilise an array of wild Power-Ups, including huge bursts of energy, defensive shields, nitro speed boosts, landmines and many more in a blistering race to the finishing line. They can even be combined strategically to go into overdrive when nanoseconds count. The action takes place in stunning racing environments amid real world locations and features licensed, photo-realistic cars. Insane collisions are literally around every corner, especially when racing against friends in 4-player split-screen mode or online with up to 20 other racers.

To be in with a shout of winning a copy of all the corking games in this Recommended Extra, just answer the following question: Activisionâ&amp;#x20AC;&amp;#x2122;s whizzy new racer Blur is from the renowned developer of the Project Gotham Racing series. What is its name? A) Bizarre Creations B) Ridiculous Happenings C) Quite Silly Software

Send your answer to activision@intentmedia.co.uk

The official retail guide to the biggest games of the year