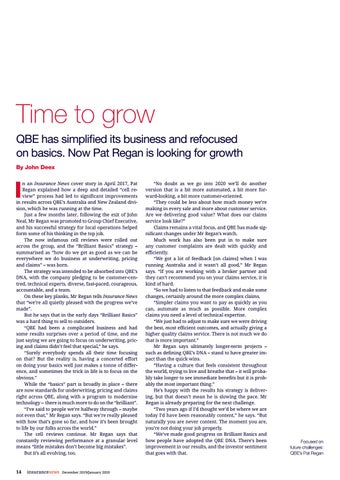 Time to grow QBE has simplified its business and refocused on basics. Now Pat Regan is looking for growth By John Deex

n an Insurance News cover story in April 2017, Pat Regan explained how a deep and detailed “cell review” process had led to significant improvements in results across QBE’s Australia and New Zealand division, which he was running at the time. Just a few months later, following the exit of John Neal, Mr Regan was promoted to Group Chief Executive, and his successful strategy for local operations helped form some of his thinking in the top job. The now infamous cell reviews were rolled out across the group, and the “Brilliant Basics” strategy – summarised as “how do we get as good as we can be everywhere we do business at underwriting, pricing and claims” – was born. The strategy was intended to be absorbed into QBE’s DNA, with the company pledging to be customer-centred, technical experts, diverse, fast-paced, courageous, accountable, and a team. On these key planks, Mr Regan tells Insurance News that “we’re all quietly pleased with the progress we’ve made”. But he says that in the early days “Brilliant Basics” was a hard thing to sell to outsiders. “QBE had been a complicated business and had some results surprises over a period of time, and me just saying we are going to focus on underwriting, pricing and claims didn’t feel that special,” he says. “Surely everybody spends all their time focusing on that? But the reality is, having a concerted effort on doing your basics well just makes a tonne of difference, and sometimes the trick in life is to focus on the obvious.” While the “basics” part is broadly in place – there are now standards for underwriting, pricing and claims right across QBE, along with a program to modernise technology – there is much more to do on the “brilliant”. “I’ve said to people we’re halfway through – maybe not even that,” Mr Regan says. “But we’re really pleased with how that’s gone so far, and how it’s been brought to life by our folks across the world.” The cell reviews continue. Mr Regan says that constantly reviewing performance at a granular level means “little mistakes don’t become big mistakes”. But it’s all evolving, too.

“No doubt as we go into 2020 we’ll do another version that is a bit more automated, a bit more forward-looking, a bit more customer-oriented. “They could be less about how much money we’re making in every sale and more about customer service. Are we delivering good value? What does our claims service look like?” Claims remains a vital focus, and QBE has made significant changes under Mr Regan’s watch. Much work has also been put in to make sure any customer complaints are dealt with quickly and efficiently. “We got a lot of feedback [on claims] when I was running Australia and it wasn’t all good,” Mr Regan says. “If you are working with a broker partner and they can’t recommend you on your claims service, it is kind of hard. “So we had to listen to that feedback and make some changes, certainly around the more complex claims. “Simpler claims you want to pay as quickly as you can, automate as much as possible. More complex claims you need a level of technical expertise. “We just had to adjust to make sure we were driving the best, most efficient outcomes, and actually giving a higher quality claims service. There is not much we do that is more important.” Mr Regan says ultimately longer-term projects – such as defining QBE’s DNA – stand to have greater impact than the quick wins. “Having a culture that feels consistent throughout the world, trying to live and breathe that – it will probably take longer to see immediate benefits but it is probably the most important thing.” He’s happy with the results his strategy is delivering, but that doesn’t mean he is slowing the pace. Mr Regan is already preparing for the next challenge. “Two years ago if I’d thought we’d be where we are today I’d have been reasonably content,” he says. “But naturally you are never content. The moment you are, you’re not doing your job properly. “We’ve made good progress on Brilliant Basics and how people have adopted the QBE DNA. There’s been improvement in our results, and the investor sentiment that goes with that. 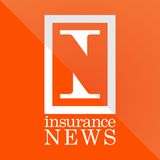 The NSW and Queensland spring bushfires caught everyone by surprise, and now the states – and insurers – are bracing for a summer like no ot...

The NSW and Queensland spring bushfires caught everyone by surprise, and now the states – and insurers – are bracing for a summer like no ot...