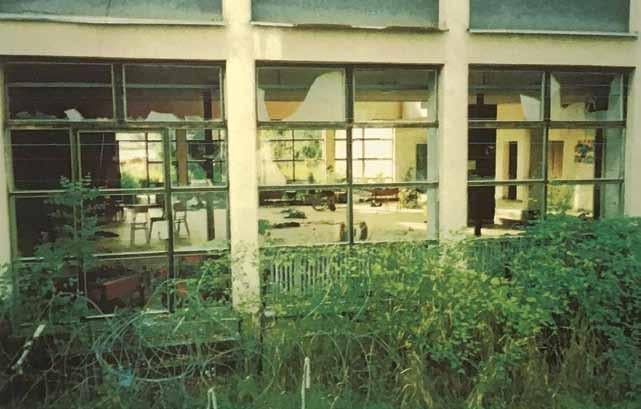 The Moral of the Dvor Massacre...
Trenches near Kyiv where the commandment of the 1st Ukrainian front has been located, turned into an experiential tourism site. Photo: Puteshestvie v SSSR, 1975, #3, p. 19

Second World War Memorial Sites as International Tourist Destinations in the Soviet Union. Monuments are not only propaganda efforts of the state or the mere effect of architects’ and artists’ intentions. They are rather a process, as their meaning is recreated in interaction. International tourism allows us to better understand the performative aspects of commemoration culture, as the interaction with the “other” can explain the dynamics of local society itself.

In 1966, a group of tourists from East Germany visited the city of Kharkiv in Soviet Ukraine, which turned out to be quite an impressive and surprising experience for them. Beyond the tour of the city, they were invited to an informal meeting with the local society of friends of the German language, headed by distinguished persons with a German background. These included someone called Schmiedel, who had personally known Karl Liebknecht and Rosa Luxemburg, and someone called Weis, who had participated in the Schutzbund uprising in Austria in 1934 and was now a professor of German at Kharkiv University. Some of the members of the society were former inmates of the Buchenwald concentration camp. The hosts impressed the visitors with their deep knowledge of German culture and poetry. Then Ukrainian songs and dances were performed by university lecturers and students.

“Chatting over a cup of coffee provoked the tourists to become sincere,” the tourist guide reported. “One of the female tourists with tears in her eyes said that during the war her younger 18-year-old brother was killed in action, and that the blame for his death and for the death of thousands of Soviet people lay on Hitler and German militarism.” Another tourist said during such an evening: “I should disclose that back then I was on this land as an enemy. Now I am a communist.”1

This description of the tourist experience through the eyes of the tour guide is emblematic of the interrelation between the Soviet Union’s consumer culture, modernization, heritage tourism, the memory culture of the Second World War, and the making of late Soviet Ukrainian identity. It reveals the interconnection of several important issues of late Soviet history.

The memory of the Soviet victory in the Second World War was instrumentalized in international relations to strengthen the socialist bloc, to condemn everything “fascist” and “alien,” and to legitimize Soviet domination. There were also other trends such as the turn to experiential and entertaining tourism that included more “national flavor” and more person-oriented service. The sharing of wartime experiences, though structured and “orchestrated” by the hosts, still left the op-

portunity for exchanging personal memories and opinions. Last but not least, local pride—as in the case of Kharkiv, one of the leading cultural and intellectual centers of Soviet Ukraine—was instrumentalized to present Soviet people as highly cultured and educated, another important task of international tourism in the competition between the capitalist and socialist countries and blocs to win “hearts and minds.”

The kind of conversations like the one described above, with the sharing of personal memories, was most effectively stimulated by visiting Second World War memorial sites—the must-see part of any guided tour to the Soviet Union. These sites as tourist destinations were much more than places of the official memory cult and for the propaganda of “international friendship” and “peacemaking.”

In the late Soviet decades many of them became much more oriented towards entertaining and an “experiential” approach, inviting visitors to bodily feel the reconstructed elements of the past—for example, at recreated trenches near Kyiv where the command of the 1st Ukrainian Front was located (see photo), or at the numerous mud huts of the Belarusian partisans reconstructed as museums.2 In excursions to cities and villages, visiting Second World War monuments was inevitable, alongside diverse (and more entertaining) elements such as visits to local enterprises, kindergartens or other elements of social or cultural infrastructure, and historical monuments of previous centuries, or eating in a themed ethnic restaurant.

One example of successfully balancing these diverse elements (described in the regional Inturist report as one case of “best practice”) was a guided tour of the collective farm named after Mykola Gogol in Myrhorod district in Ukraine. In 1974 it reported welcoming more than 1,500 visitors over the twelve previous years, mostly from capitalist countries. They were shown the fields, production facilities, the village of Velyki Sorochyntsi, the Gogol Museum, the monuments to the October Revolution and the Second World War, and a group of 18th-century buildings.3

A mix of national flavor, industrial pride, and the pleasures of wandering in a natural landscape was accessible at one of the most visited venues in Soviet Ukraine: the giant Dniprohes hydroelectric plant in Zaporizhia. There, the laudation of human technical genius was coupled with the story of the unknown Soviet soldier who reportedly pre-

vented the dam from being blown up by retreating Nazi troops to the cost of his life, and who was buried there and honored with a monument. The tour was completed by a visit to the ancient oak, supposedly from the Cossack epoch, and the story of the “glorious” Cossacks on Khortytsia island (and in the 1980s with a tour “in a real Cossack chaika,” a reconstructed historical boat).4

Another revealing case is the tour of the Livadia Palace in Crimea, the site of the Yalta conference in 1945. This combined instructive narration about the conference and the peacemaking politics of the Soviet Union with the presentation of the excellent conditions for vacationing of Soviet people at the sea resort and wine-tasting at the local winery. With time, one more element became prominent: the palace’s other layer of heritage as a “former Czarist residency,” which manifested the turn to Russian national and imperial themes in late Soviet society.5

The national flavoring of such tours had a clear commercial purpose, but it also fitted the expectations of visitors from diaspora groups, who were especially sensitive to issues of national rights in the land of their (or their ancestors’) origin.

Of course, the consumerist turn and entertaining approach in tourism had limits in Soviet everyday reality. As many studies have showed, the limited resources and capacities of the Soviet tourist infrastructure was quite a pressing issue, and in many cases securing a decent hotel or a pleasant seat in a restaurant was not so easy to achieve. However, the shortcomings of life in the Soviet Union could be justified by reference to the tremendous wartime destruction. Typical guided tours of cities and villages included references to the enormous scale of damage and to the very quick postwar reconstruction. The contrast between wartime ruins and contemporary achievements was also a widespread advertisement strategy in a specialized press for foreigners, such as the Travel to the SSSR journal. Some tourist guides even criticized visitors for being “obsessed” with comfort and consumerism— visiting “sacred” places related to the Second World War could bring a sublime, and emotional, dimension into their experience.

In fact, these two aspects of the wartime commemorative sites— one connected to the sublime experience of heroism and solidarity, and another to spending leisure time—were not contradictory. The commemorative culture of the Second World War was presented to foreign visitors as a part of an alternative modernity in which one could experience not only technical advancement and consumerism but also feelings of solidarity and gratitude to heroes. And the ability to absorb and socially frame personal experiences of the war, as well as the merging of its memory with leisure and entertainment practices, laid the ground for the endurance of wartime commemorations also after the fall of the Soviet Union. ◁

Iryna Sklokina is a historian and researcher at the Center for Urban History in Lviv, Ukraine. She was IWM Junior Visiting Fellow 2020–21 (Ukraine in European Dialogue).