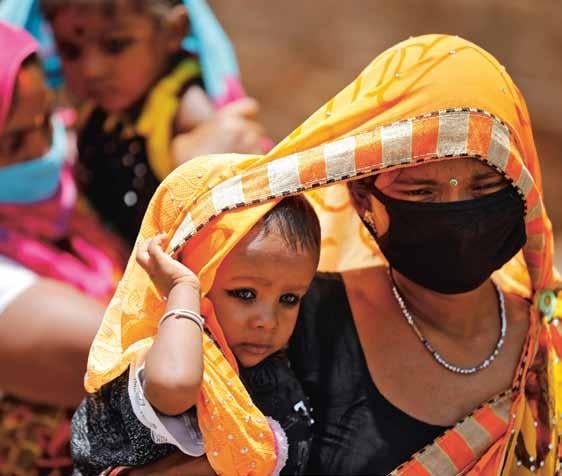 Migration, Governance, and Inequality: Covid-19 has disproportionately impacted the health, survival and livelihood of racialized groups, migrants and the poor in the United Kingdom. This piece argues that in addition to the literal reproductive capacity of the virus, which is biological, the virus has a secondary repetition, which is social: it reproduces and amplifies the scale and intensity of existing structural and intersectional inequalities in public health, differentially impacting the most vulnerable groups.

The direct negative effects of the pandemic have exposed existing economic, social, and health inequalities. Less is known about the indirect effects of the pandemic that are linked to governmental responses. Pandemic governance can also be discriminatory. It can negatively affect marginalized sectors of the population, such as when resources are unequally distributed, resulting not only in increased risks of contracting or dying from the virus but also the capacity of individuals to follow the recommendations to control the pandemic. Covid-19 has disproportionally prejudiced the ability of racialized, gendered and migrant groups to adhere to the Government’s public health guidelines, putting them at increased risk from coronavirus than the general population.

The discriminatory outcomes of the pandemic, and its management, are experienced differently along intersectional lines of class, gender, ethnicity and generation. This is particularly significant for gendered and racialized non-citizens who are subjected to the Government’s Hostile Environment immigration policies. Since 2010, UK immigration policies initially targeted at individuals with irregular status in the UK have created an intentionally “hostile environment” whose impacts have spilled into other categories of non-citizens. The most notable case is that of the Windrush generation of Caribbean migrants who arrived in the UK after World War II as Commonwealth citizens, with the right to reside permanently in the UK and who have faced deportations and been denied access to health care and welfare in recent years. The 2014 and 2016 Immigration Acts have restricted access to housing, healthcare, banking and legal representation, limited access to services, facilities and employment by reference to immigration status, and increased penalties for unauthorized working. The future predicament of European migrants after Brexit is still unclear, following the introduction of new restrictions for European citizens in November 2020, when the Immigration and Social Security Coordination (EU Withdrawal) Act was passed into law.

The first cases of Covid-19 were identified in the UK at the beginning of 2020. On March 23, 2020, Prime Minister Boris Johnson announced new measures to control the rapid spread of the pandemic, which continue to be partially in housing, which increased their risk of contracting Covid-19. They were forced to share common spaces such as the kitchen and bathroom with strangers, in breach of strict measures to socially distance and unable to self-isolate.

During lockdowns, domestic violence in the home worsened. For instance through the data sharing of a patient’s non-clinical information from the NHS to the Home Office or the NHS surcharge, whereby non-EU patients are made to pay fifty percent more than it costs the NHS to treat them. Defaulting on the payment of bills has serious consequences for migrants and asy-

place. The government’s announcement was captured by the slogan “Stay Home—Protect the NHS1 — Save Lives.” Yet, this message presumes that accommodation is safe for all, that admission to health services is accessible and free at point of use and that all residents in the country can follow the guidelines to reduce mortality rates.

The government’s guideline to “Stay Home” assumes that home is a protected space for all, that UK residents have a home to stay in and that they have autonomy in the decision to stay home. Individuals and families who apply for protection are placed in temporary accommodation while their asylum claims are being heard. During lockdown, many non-governmental organizations reported that asylum-seeking families and their children were living in dreadfully overcrowded and unhygienic women whose immigration status is linked to that of their partner, the likelihood of leaving an unsafe home was further restricted because of Hostile Environment policies. They are afraid of putting their immigration status at risk if they flee from their partner. Furthermore, the closure of women’s refuges during lockdown meant that migrants with precarious immigration status who wanted to flee domestic abuse were blocked from accessing help.

Many key workers who keep the economy going during lockdowns are gendered and racialized migrants. Many do not have the financial autonomy to stay home and their ability to follow public health guidelines is hindered when protective equipment is not available and social distancing is not practiced at work.

The Government’s second slogan—“Protect the NHS”—assumes equal access to health care. However, Hostile Environment immigration policies have created barriers to accessing the health service, for lum seekers, who can be reported to the Home Office and have their application for settled status rejected due to non-payment. This system of immigration restrictions threatens migrants’ ability to remain in the country and actively discourages them from seeking healthcare. Nongovernmental organizations working with migrants and those in the health sector reported that during the pandemic, migrants with precarious status were less likely to report symptoms, go to the hospital, or seek help. Furthermore, individuals in the asylum system who live on £5.39 per day, a rate that is below the national poverty level, could not afford the costs of essential items like soaps and sanitisers during the pandemic. Lack of support disadvantaged them in their ability to adhere to public health guidelines about hygiene.

Finally, the government’s third message to “Save Lives” sadly contrasts with the UK death toll that is among the highest in the world. Increased mortality risks to Covid-19 were linked to intersectional variables such as race, poverty and immigration status, and equally important housing conditions, access to health care and ability to survive below poverty levels, all of which were seriously constrained by the Hostile Environment. Since the inception of the pandemic the Trussell Trust, which coordinates a network of food banks, documented an 89 percent rise in the number of deliveries of emergency food parcels and a 107 percent increase in parcels donated to children. Gendered and racialized individuals who live below the poverty level in the asylum system, migrants with no recourse to public funds, and those heavily reliant on welfare support were at higher risk of coronavirus-related food starvation than the general population.

Covid-19 has exposed the ways in which migration and pandemic governance are interrelated. Hostile Environment immigration policies intersected with pandemic responses that exacerbated existing health inequalities for racialized, gendered and citizenship-based categories. The analysis of accommodation, health and survival unravelled the connections between race and migration, and governance and public health. In conclusion, in addition to the literal reproductive capacity of the virus, which is biological, the virus has a secondary repetition, which is social: it reproduces and amplifies the scale and intensity of existing structural and intersectional inequalities in public health, thus differentially impacting the most vulnerable groups. The Covid-19 virus, in its socially reproductive capacity, can thus be understood as a biological descriptor for a political crisis of intersectional inequality in the politics of health. ◁

1) NHS is the National Health System.

Giorgia Donà is Professor of Forced Migration and Refugee Studies and Codirector of the Centre for Migration, Refugees and Belonging at the University of East London, United Kingdom. She was an IWM Visiting Fellow in 2021.