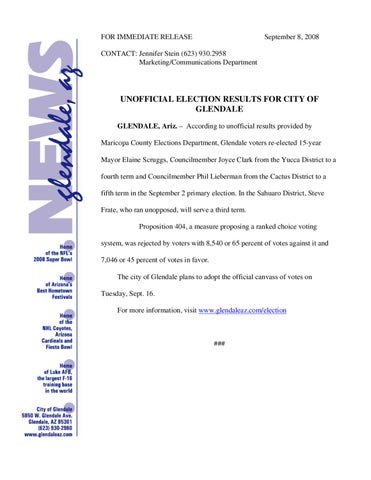 UNOFFICIAL ELECTION RESULTS FOR CITY OF GLENDALE GLENDALE, Ariz. â&amp;#x20AC;&amp;#x201C; According to unofficial results provided by Maricopa County Elections Department, Glendale voters re-elected 15-year Mayor Elaine Scruggs, Councilmember Joyce Clark from the Yucca District to a fourth term and Councilmember Phil Lieberman from the Cactus District to a fifth term in the September 2 primary election. In the Sahuaro District, Steve Frate, who ran unopposed, will serve a third term. Proposition 404, a measure proposing a ranked choice voting system, was rejected by voters with 8,540 or 65 percent of votes against it and 7,046 or 45 percent of votes in favor. The city of Glendale plans to adopt the official canvass of votes on Tuesday, Sept. 16. For more information, visit www.glendaleaz.com/election