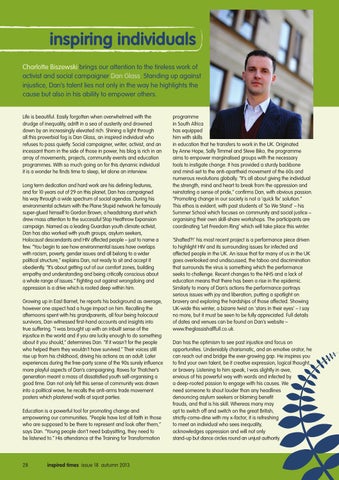 inspiring individuals Charlotte Biszewski brings our attention to the tireless work of activist and social campaigner Dan Glass. Standing up against injustice, Dan’s talent lies not only in the way he highlights the cause but also in his ability to empower others. Life is beautiful. Easily forgotten when overwhelmed with the drudge of inequality, adrift in a sea of austerity and drowned down by an increasingly elevated rich. Shining a light through all this proverbial fog is Dan Glass, an inspired individual who refuses to pass quietly. Social campaigner, writer, activist, and an incessant thorn in the side of those in power, his blog is rich in an array of movements, projects, community events and education programmes. With so much going on for this dynamic individual it is a wonder he finds time to sleep, let alone an interview. Long term dedication and hard work are his defining features, and for 10 years out of 29 on this planet, Dan has campaigned his way through a wide spectrum of social agendas. During his environmental activism with the Plane Stupid network he famously super-glued himself to Gordon Brown; a headstrong stunt which drew mass attention to the successful Stop Heathrow Expansion campaign. Named as a leading Guardian youth climate activist, Dan has also worked with youth groups, asylum seekers, Holocaust descendants and HIV affected people – just to name a few. “You begin to see how environmental issues have overlaps with racism, poverty, gender issues and all belong to a wider political structure,” explains Dan, not ready to sit and accept it obediently. “It’s about getting out of our comfort zones, building empathy and understanding and being critically conscious about a whole range of issues.” Fighting out against wrongdoing and oppression is a drive which is rooted deep within him. Growing up in East Barnet, he reports his background as average, however one aspect had a huge impact on him. Recalling the afternoons spent with his grandparents, all four being holocaust survivors, Dan witnessed first-hand accounts and insights into true suffering. “I was brought up with an inbuilt sense of the injustice in the world and if you are lucky enough to do something about it you should,” determines Dan. “If it wasn’t for the people who helped them they wouldn’t have survived.” Their voices still rise up from his childhood, driving his actions as an adult. Later experiences during the free-party scene of the 90s surely influence more playful aspects of Dan’s campaigning. Raves for Thatcher’s generation meant a mass of dissatisfied youth self-organising a good time. Dan not only felt this sense of community was drawn into a political wave, he recalls the anti-arms trade movement posters which plastered walls at squat parties. Education is a powerful tool for promoting change and empowering our communities. “People have lost all faith in those who are supposed to be there to represent and look after them,” says Dan. “Young people don’t need babysitting, they need to be listened to.” His attendance at the Training for Transformation

programme in South Africa has equipped him with skills in education that he transfers to work in the UK. Originated by Anne Hope, Sally Timmel and Steve Biko, the programme aims to empower marginalised groups with the necessary tools to instigate change. It has provided a sturdy backbone and mind-set to the anti-apartheid movement of the 60s and numerous revolutions globally. “It’s all about giving the individual the strength, mind and heart to break from the oppression and reinstating a sense of pride,” confirms Dan, with obvious passion. “Promoting change in our society is not a ‘quick fix’ solution.” This ethos is evident, with past students of ‘So We Stand’ – his Summer School which focuses on community and social justice – organising their own skill-share workshops. The participants are coordinating ‘Let Freedom Ring’ which will take place this winter. ‘Shafted?!’ his most recent project is a performance piece driven to highlight HIV and its surrounding issues for infected and affected people in the UK. An issue that for many of us in the UK goes overlooked and undiscussed, the taboo and discrimination that surrounds the virus is something which the performance seeks to challenge. Recent changes to the NHS and a lack of education means that there has been a rise in the epidemic. Similarly to many of Dan’s actions the performance portrays serious issues with joy and liberation, putting a spotlight on bravery and exploring the hardships of those affected. Showing UK-wide this winter, a bizarre twist on ‘stars in their eyes’ – I say no more, but it must be seen to be fully appreciated. Full details of dates and venues can be found on Dan’s website – www.theglassishalffull.co.uk. Dan has the optimism to see past injustice and focus on opportunities. Undeniably charismatic, and an emotive orator, he can reach out and bridge the ever-growing gap. He inspires you to find your own talent, be it creative expression, logical thought, or bravery. Listening to him speak, I was slightly in awe, envious of his powerful way with words and infected by a deep-rooted passion to engage with his causes. We need someone to shout louder than any headlines denouncing asylum seekers or blaming benefit frauds, and that is his skill. Whereas many may opt to switch off and switch on the great British, strictly-come-dine with my x-factor, it is refreshing to meet an individual who sees inequality, acknowledges oppression and will not only stand-up but dance circles round an unjust authority. 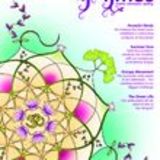