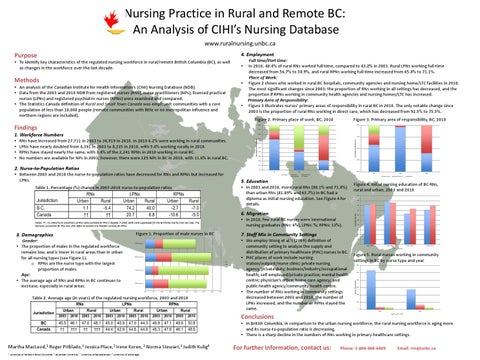 Nursing Practice in Rural and Remote BC: An Analysis of CIHI’s Nursing Database www.ruralnursing.unbc.ca Purpose

• To identify key characteristics of the regulated nursing workforce in rural/remote British Columbia (BC), as well as changes in the workforce over the last decade.

• An analysis of the Canadian Institute for Health Information’s (CIHI) Nursing Database (NDB). • Data from the 2003 and 2010 NDB from registered nurses (RNs), nurse practitioners (NPs), licensed practical nurses (LPNs) and registered psychiatric nurses (RPNs) were examined and compared. • The Statistics Canada definition of Rural and Small Town Canada was employed: communities with a core population of less than 10,000 people (remote communities with little or no metropolitan influence and northern regions are included).

Full time/Part time: In 2010, 40.4% of rural RNs worked full-time, compared to 43.2% in 2003. Rural LPNs working full-time decreased from 56.7% to 38.9%, and rural RPNs working full-time increased from 65.8% to 71.1%. Place of Work: Figure 2 shows who worked in rural BC hospitals, community agencies and nursing home/LTC facilities in 2010. The most significant changes since 2003: the proportion of RNs working in all settings has decreased, and the proportion if RPNs working in community health agencies and nursing homes/LTC has increased. Primary Area of Responsibility: Figure 3 illustrates nurses’ primary areas of responsibility in rural BC in 2010. The only notable change since 2003 is the proportion of rural RNs working in direct care, which has decreased from 92.5% to 75.5%. Figure 2. Primary place of work, BC, 2010 100%

Figure 3. Primary area of responsibility, BC, 2010

• Between 2003 and 2010 the nurse-to-population ratios have decreased for RNs and RPNs but increased for LPNs.

Notes: †† - no urban/rural allocations of RNs were available for RNs in Quebec in 2003. Data were suppressed for the territories due to small cell sizes. The National jurisdiction for RNs and LPNs refers to Canada and Western Canada for RPNs.

Figure 1. Proportion of male nurses in BC

Figure 5. Rural nurses working in community settings in BC by nurse type and year 600

• In British Columbia, in comparison to the urban nursing workforce, the rural nursing workforce is aging more and its nurse-to-population ratio is decreasing. • There is a sharp decline in the numbers of RNs working in primary healthcare settings. 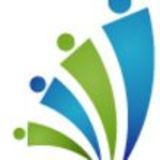