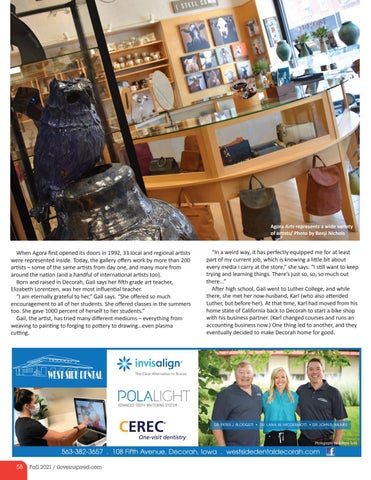 When Agora first opened its doors in 1992, 33 local and regional artists were represented inside. Today, the gallery offers work by more than 200 artists – some of the same artists from day one, and many more from around the nation (and a handful of international artists too). Born and raised in Decorah, Gail says her fifth grade art teacher, Elizabeth Lorentzen, was her most influential teacher. “I am eternally grateful to her,” Gail says. “She offered so much encouragement to all of her students. She offered classes in the summers too. She gave 1000 percent of herself to her students.” Gail, the artist, has tried many different mediums – everything from weaving to painting to forging to pottery to drawing…even plasma cutting.

“In a weird way, it has perfectly equipped me for at least part of my current job, which is knowing a little bit about every media I carry at the store,” she says. “I still want to keep trying and learning things. There’s just so, so, so much out there...” After high school, Gail went to Luther College, and while there, she met her now-husband, Karl (who also attended Luther, but before her). At that time, Karl had moved from his home state of California back to Decorah to start a bike shop with his business partner. (Karl changed courses and runs an accounting business now.) One thing led to another, and they eventually decided to make Decorah home for good. 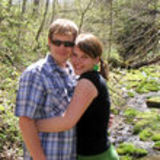