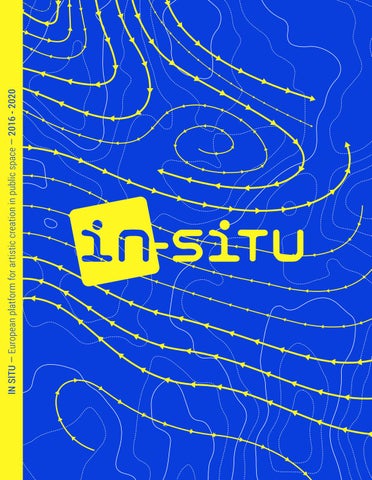 artistic encounters - the very thing that has kept IN SITU going for the past 17 years. Firstly, encounters between artists and programmers, who get to know one another and understand the aspirations of artists and the local challenges in order to adapt artistic projects to each context. Secondly, encounters between artists, to create synergies, provide mutual inspiration, share questions about contemporary creation in public space and sometimes even to work artists and audiences in order to transform everyday life, whether through a project involving inhabitants several months in advance or a performance bringing in festival-goers or onlookers. Art in public space is unique because it also reaches people who rarely, if ever, visit cultural venues. In the following pages, you will discover laboratories (“Hot Houses” and “Ateliers”) where artists and organisers spend several days working on artists’ creations, the “International Residency Programme” which helps artists to develop their projects, support for “Transnational Mobility”, long-term support for “Pilot Projects”, the creation of the its kind - and the implementation of local artistic experiments known as “Artistic Acupuncture”, an initial step towards strengthening ties with civil society.

You can read this book in any order you like. It offers just a brief overview of the 250 IN SITU artists, with a focus on those supported under the IN SITU ACT programme. Not all artists are presented here and we hope that those missing will forgive us. The purpose of our selection is to reflect the diversity of formats, aesthetics and new trends, which is what truly makes the network what it is today. The context has changed over the last four years, with Brexit, increased security in public space, declining funding, a rise of populism and greater awareness of fundamental global issues, such as the need equality. All these changes have impacted IN SITU and the artists, who immerse themselves in everyday life so as to be better able to transform it. The network is also changing, as it becomes clear that public space faces the same issues as society, and that art is not excluded from these transformations, but is actually part of it. On the cusp of a new era, the partners continue to work diligently with artists and audiences. They have been working hard on the future of IN SITU, to ensure the sustainability of the network and the support it offers artists. We will keep you posted soon. Until then, sit back and let the artists take you on a journey!

The IN SITU partners & team

Benjamin Vandewalle transforms the meeting place into a place of wonder and shows interactive installations that question the perception of the visitors. (FUTTER, Kleine Zeitung, Austria)

What we seek to awaken in each place? Dreams and imagination. Working in public space means for us that the landscape occupies a central role. It plays its own character. Arnaud Poupin, La Folie Kilomètre (France)

If you don’t respond to the space you’re in, and draw inspiration from the people that use the space, there is no point. Alan Richardson, Surge (United Kingdom)

Public space for me? I would say ultimately it is about an opportunity to elevate the ordinary into extraordinary. Jenny Hunt, Hunt & Darton (United Kingdom)

In its own way, then, Pig is a provocation. It says to the public passing by: there will be money in here, and you have the freedom to decide how it should be spent. The money is referred to as a ‘community fund’, indicating that its use should be towards the good of the community. But will everyone passing by agree?

For me public space starts with thinking, feeling, breathing differently and together. Dagmar Slagmolen, Via Berlin (The Netherlands)

I like to work with what already exists, and by adding something, I change a lot of its energy and its function. Veronika Tzekova (Bulgaria)

Public space is a stage for confrontation. A confrontation for political, cultural and commercial narratives. Public space is the most intensely packed sphere that we perceive as reality. Transforming this stage as one fictional reality states a great challenge, but an equally great opportunity. Ambrus Ivanyos, Meetlab (Hungary)

In Foreign Tongues Chris Haring and his company manage to create a vivid representation of a world in which the body has transcended the various different languages. Der Standard (Austria)

We work in the public realm, always conscious of the relationship between site, artist and audience. James Moore, Østfold Internasjonale Teater (Norway)

The connection of everything with everything Collectief Walden (The Netherlands) 28

We search for connections between the location and the story that will be told. Kees Lesuis, Oerol Festival (The Netherlands)

The project is about the European Union. For me it’s very important to exhibit it to make it obvious that in the national anthems, the countries show that they want to protect their borders. Right now, in the strange situation the European Union is facing, it raises the provocative question: finally is it important that we stay together ? Richard Wiesner

When you put a festival in public space, you have an opportunity to really say something, inspire people, to try and change the way people think. If you put a show in a particular space, it changes the way you think about the space. Mikey Martins, Freedom Festival (United Kingdom)

The artists never miss a chance to activate the audience. At first you have to exchange briefly with the person next to you about how people think about democracy. And from then on, it goes crescendo. [...] This way, the audience physically experiences what democracy can mean: listening to each other’s suggestions, and making it clear what you can or cannot agree on. De Morgen (Belgium)

In Search of Democracy 3.0 Lucas de Man (The Netherlands) 40

Public space is any space where we cannot really predict what is happening and who is going to use it and for what. Johannes Schrettle, workinglifebalance limited GBR (Austria)

Public space is a sonic adventure where the routine and the unexpected meet. It is an evolving composition where each one of us is responsible for the outcome. Marco Barotti (Germany/Italy)

It is the place where we share, where we have something in common with the others. The invisible space. Marta Bichisao, Opera Bianco (Italy)

It is a place where strangers can meet. Jassem Hindi, Mia Habib Productions (Norway)

We think that it’s very crucial today to give voice to the multitude, to mutualization and solidarity practices that exist in Europe. To propose new prototypes of being together, alternatives to individualistic idea of Europe. Anna Rispoli

Public space is a space for everyone where every encounter is possible. It is also the space where frontiers and limitation of what we can be and do are constantly redefined. Franklin Roulot, La Fabrique Royale (France)

MAPPING OF THE NETWORK Geographic diversity

for 32 artists and 20 programmers

for 33 artists and 20 programmers

Typology of the IN SITU ACT partners’ activities

IN SITU ASSOCIATE PARTNERS SINCE 2018

Publication’s Director: Pierre Sauvageot Coordination: Nadia Aguir, Maria Flügel, Elisabeth Simonet Layout: Chloé Msset Printed by CCI, April 2020 Product from sustainably managed forests and controlled sources. Information correct at time of print IN SITU ACT 2016 - 2020 is co-funded by the Creative Europe programme of the European Union. This communication reflects the view only of the author, and the Commission cannot be held responsible for any use which may be made of the information therein. 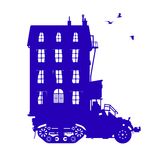