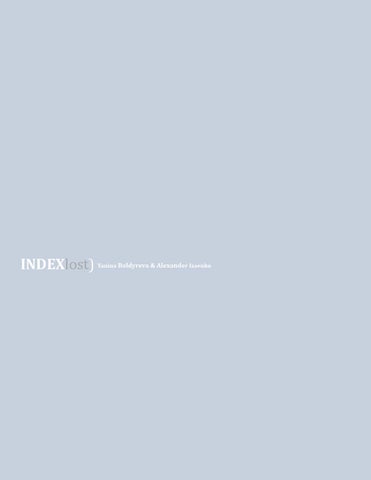 Witness. A cold pulsating blast spirally returns me to the warm beach. Someone’s footprints in the course. Is it an epistle to anybody? There, on the other side, there is no answer, like a hoarse voice, like it doesn’t exist at all. “Where am I? …where have I been brought to?...” – it’s hanging like a damp foggy clod. We create an intention aimed on the landscape, losing communication links, scale, landmarks. Plunging into the spatial composition through myopia, where the events can’t be heard by each other, “offset diopters” provide some picture of every loneliness conductor inner world.

The story is always the same, isn’t it? A direct speech dissects the atmosphere with a plenty of voices, like with the thin lines. There is nothing drearier than the sky covered with stripes of obstacles, when it definitely doesn’t belong to itself anymore.

The book includes fragments of the blogs texts.

…we play tennis, watch movies, read books. Everything is well.

…After the explosion in Avtozavodskaya the fear of metro and large gatherings of people has remained...

”...someday.” That is how all more or less decent dreams start. “Someday,” and then you don’t have to think about when exactly.

Youâ&amp;#x20AC;&amp;#x2122;re like God, who has an eternity ahead of him. Dreams defeat the thoughts about death...

Watching the fire. Behind the garages. A fire truck came quickly. But the fire and the wind spread around the forest. Theyâ&amp;#x20AC;&amp;#x2122;ll extinguish. But no, how can they drive up?

...I had red hair, I believed in love and in the power of naked breasts in art. We were kind of romantic young and free. We lived in houses with the huge windows, watched the sunsets from the top floors and loved ourselves too much.

â&amp;#x20AC;Śfeeling of a big hole in the ground, when you look into this pit - a quarry, a basis for the foundation of the important building - it seems like the world is moved up to you closely , breathing into the face.

…between these days we come across different eyes, hands, habits, voices. We try to live with all this, try to fill our weeks and months. We think that it should be so. It seems to us.

Inside an ordinary (intelligent) reflection person almost doesnâ&amp;#x20AC;&amp;#x2122;t move, rather makes involuntary jerks that do not lead him anywhere, and the only thing which can cause moving is the afflatus appearing almost out of nowhere.

...We lived in a big house far from the city center. It was a forest around usand the fast river flowed underneath... I already returned there alone, and I wanted to set the forest and the house on fire, and get drowned in the river.

People generally twinkle: here and there.

There comes a time when human becomes not quite here.

â&amp;#x20AC;Śitâ&amp;#x20AC;&amp;#x2122;s weird to find out something new about yourself, as if you meet someone who is complete stranger...

…for some time it exists in a dream. In the first seconds of reality I’m in a semi-conscious state, and then the conscious comes back…

... she changes dramatically in herself, here she jumps, havingfun, everything is alright, then suddenly changes in the face, sits down and falls intoher thoughts.

She can whisper something or move her lips while trying to hide it, and watch the reaction of people around.

Such complicated, multi-color, fluid, huge. The city under the sky seems only a cardboard backdrop, and everything real is there above.

â&amp;#x20AC;ŚI feel so good last month, like I have to pay for this May.

â&amp;#x20AC;Śyou are afraid because of stupidity, because of ignorance. The events around you are created every moment, the words are spoken and the emotions are burned, and the environment you have made is revolving around you, swelling, swellingâ&amp;#x20AC;Ś

…after that we did become closer. What a stupid idea it wastogo to the beach and stare at the waves mutely, what else could be dumber.

...there is a rational seed, a critical view and even the distinctive sense of humor, but itâ&amp;#x20AC;&amp;#x2122;s not enough to hold on, so it would be better just to soar in the clouds in complete ignorance.

…they began to look for child on Wednesday, April 17. About 12 o’clock.

This is such a useless and impressing, because of its worthless, catalog of useless landscapes.

Some light changes there, leaves fall down and grow, the river flows, the river does not flow â&amp;#x20AC;&amp;#x201C; it would seems, who cares, but the man draws.

...they hit the road searching of something elusive, thousands of rubles they received, thousands of kilometers they had overcame to earn them, widespread lingering concern.

...there is nothing worse than loneliness. But what do we have in fact?

When we go out on a date, we actually compete with the loneliness of the person we meet. And what is the most common result? The loss...

…he was immediately covered with a wax-cloth, without giving me any chance to examine, and I was taken under the entrance canopy for writing the report. And in that moment it thundered, and the rain poured...

It’s all aboutthe scale: it is known that the general idea of “life” is terribly wrong, but the scales of these ideas often remain hidden - but mean while they are monstrous.

…there is nothing to be caught by the eye. White, white, white, white and a little more white. And the brain starts to work on some fantastic speeds. …for some time it exists in a dream. In the first seconds of reality I’m in a semi-conscious state, and then the conscious comes back…