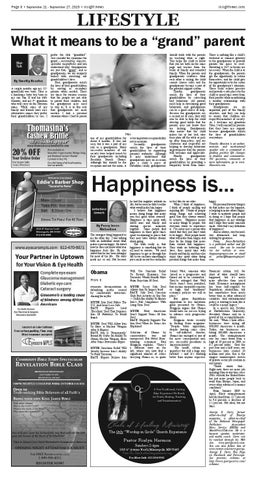 LIFESTYLE What it means to be a “grand” parent Man Talk

By Timothy Houston A couple months ago my 12th grandchild was born. Titus is a handsome baby boy born to my son Tim II and his wife Shaunte, and my 9th grandson who will carry on the Houston name. While some of my family and friends have nice alternatives names they prefer their grandchildren to use, I

prefer the title “granddad”. Just consider the synonyms for grand – outstanding, majestic, splendid, magnificent, and you understand why. Grandparents are just that, “grand”, and as grandparents, we are uniquely tasked with enriching our grandchildren’s lives. First, grandparents enrich the lives of their grandchildren by serving as secondary parents when needed. There are times for various reasons that the people are not able to parent their children, and the grandparent may need to step in. It is in this role that grandparents are most needed. I had a personal situation where I had to parent

Titus one of my grandchildren for about 6 months. It was not easy, but it was a part of my role as a grandparent. Many successful members of our society were helped raised by their grandparents including President Barack Obama. Although this should be the exception and not the norm, it

is too important a responsibility not to mention. Secondly, grandparents enrich the lives of their grandchildren by supporting parental authority. Although it may understood that grandparents may on occasion give a child a piece of forbidden candy, grandparents

should work with the parents on teaching what is right. This helps the child to know that you are both on the same page and teaches them the value of family and extended family. When the parents and grandparents reinforce what each other is saying, the child cannot choose sides and the grandparents become a part of the parental support system. Thirdly, grandparents enrich the lives of their grandchildren by correcting bad behaviour. All parents need help in developing good behaviour, and grandparents can be a good source of help. Because the grandparents are a second set of eyes, they will also be able to help the child develop good habits that the parents may not know they are lacking. Grandparents who ensure that the child makes his or her bed, take their plate off the table or pick up after themselves, and are courteous and respectful are helping to develop behaviour improvements that the parents will welcome and appreciate. Finally, grandparents enrich the lives of their grandchildren by providing a temporary break from home.

There is nothing like a child’s weekend or summer getaway to the grandparents to provide parents the space to reset. Parenting is 24/7 so breaks are necessary. When the child is at the grandparents, the parents get the opportunity to retune themselves, and the child gets the opportunity to be the center of the grandparent’s attention. These visits relieve pressure and provide a safe place for the child to spend time away from their parents while maintaining a healthy relationship with their grandparents. Grandparents are an important part of the family structure, and they can help to ensure that children are respectful members of society. As I welcome my grandson Titus, I will remind his parents that they have my support because grandparents enrich the lives of grandchildren everywhere. Timothy Houston is an author, minister, and motivational speaker who is committed to guiding positive life changes in families and communities. For questions, comments or more information, go to www. tlhouston.com.

By Penny JonesRichardson The strangest thing happened to me the other day. I was talking with an individual about what makes a person happy. He stated how he does not know what true happiness feels like. He also stated that he has been unhappy for most of his life. His story made me so sad. Not because

Obama From 6 extensive documentation in debunking myths created by conservative detractors. Among the myths: MYTH: Iran Deal Makes The U.S. And Israel Less Safe FACT: Experts Laud ‘Excellent’ Deal That Deprives Iran Of Pathways To Build Bomb MYTH: Deal Will Allow Iran To Have A Nuclear Weapon After It Expires FACT: Iran Is ‘Permanently’ Bound By Curbs On Ability To Obtain Nuclear Weapon, Even After Some Provisions Expire MYTH: Sanctions Relief Will Greatly Increase Iran’s Ability To Fund Terrorism FACT: Experts Believe Iran

he had this negative outlook on life, but because he didn’t realize what would make him happy. I believe that happiness means doing things that make you feel good about yourself. Happiness is time spent with loved ones and family and sharing special moments together. Some people find happiness in those great times spent vacationing to places that they may have always dreamt about going. The truth really is, that happiness is something that we all need to survive. We need happiness to get us through this life so we can have something to put a smile on our face and make

us feel like we are alive. When I think of happiness, I think of people smiling and enjoying life. I think of people doing things and achieving goals that they always wanted to achieve. Happiness means so many things to people, but everyone wants to experience it. I’ve never met a person who stated that they just don’t want to be happy. Most people know what will make them happy, and they do the things that move them toward that happiness. They work on bettering their lives, they spend time with friends and family, and they also enjoy time spent alone doing personal things that make them

happy. My personal favorite thing to do that makes me the happiest, is helping to make others happy. I write to motivate people and in doing so I hope that people find happiness in my writings and I hope they make someone smile. Now that’s my definition of happiness! And as always, stay focused, stay determined, and keep striving for greatness. Penny Jones-Richardson is a published author and life coach. She can be reached via her website at www. thequeensproject.com or email at penny@thequeensproject. com.

Will Use Sanction Relief To Restart Economy, Say Terrorists Would Benefit More From Rejection Of Deal

Cornel West, someone who ‘posed as a progressive and turned out to be counterfeit.’ They’re outraged that Wall Street hasn’t been punished, that income inequality remains so high, that ‘neoliberal’ economic policies are still in place.” But given Republican opposition to less ambitious goals presented by Obama, Krugman argues that Obama would have no success trying to advance such progressive ideals. Krugman wrote recently in Rolling Stone magazine: “Despite bitter opposition, despite having come close to self-inflicted disaster, Obama has emerged as one of the most consequential and, yes, successful presidents in American history. “His health reform is imperfect but still a huge step forward – and it’s working better than anyone expected.

Financial reform fell far short of what should have happened, but it’s much more effective than you’d think. Economic management has been half-crippled by Republican obstruction, but has nonetheless been much better than in other advanced countries. And environmental policy is starting to look like it could be a major legacy.” In a speech last October at Northwestern University, President Obama said he is proud of his accomplishments. He said, “When I took office, businesses were laying off 800,000 Americans a month. Today, our businesses are hiring 200,000 Americans a month. The unemployment rate has come down from a high of 10 percent in 2009, to 6.1 percent today. Over the past four and a half years, our businesses have created 10 million new jobs; this is the longest uninterrupted stretch of private sector job creation in our history. “Think about that… Right now, there are more job openings than at any time since 2001. All told, the United States has put more people back to work than Europe, Japan, and every other advanced economy combined.” From January 2009 to April, Black unemployment had declined from 12.7 percent to 9.6 percent, a decrease of 3.1 percent. Not ideal, but not lame.

MYTH: Secret Side Deal Allows Iran To Inspect Itself FACT: Side Deal Concerns Only Past Activity At One Site — IAEA Has Ability To Ensure Iran’s Full Compliance With Long-Term Deal MYTH: Most Americans Don’t Support Terms Of Iran Deal FACT: Majority Supports The Iran Deal When Its Terms Are Explained Criticism of Obama by conservatives was not unexpected. But Nobel Prizewinning economist Paul Krugman explains, “There’s a different story on the left, where you now find a significant number of critics decrying Obama as, to quote

A Non-Traditional, Cutting Edge Experience! Be Ready for Truth, Healing, Teaching and Transformation!

Circle of Healing Ministry The Only “Worship in Circle” Church Experience

George E. Curry, former editor-in-chief of Emerge magazine, is editor-in-chief of the National Newspaper Publishers Association News Service (NNPA) and BlackPressUSA.com. He is a keynote speaker, moderator, and media coach. Curry can be reached through his Web site, www.georgecurry.com. You can also follow him at www.twitter.com/currygeorge, George E. Curry Fan Page on Facebook, and Periscope. See previous columns at http://www.georgecurry.com/ columns

News for the week of September 21, 2015. Insight News is the community journal for news, business and the arts serving the Minneapolis / St....

News for the week of September 21, 2015. Insight News is the community journal for news, business and the arts serving the Minneapolis / St....