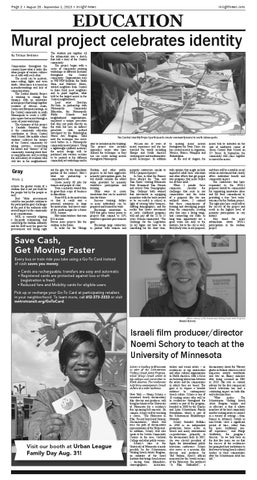 EDUCATION Mural project celebrates identity By Titilayo Bediako Communities throughout the country know what it looks like when people of various cultures are at odds with each other. The result can be mistrust, name-calling, fights and even death. Often times it is based on misunderstandings and lack of communications. The Central Identity Project is working to change this dynamic with an innovative mural project that brings together residents of African, Asian, Latino and European heritage, in the Central community in south Minneapolis to create a 2,000plus square foot mural through a series of paint workshops. The visionary of this project is Candida Gonzalez, who is the community education coordinator at Green Central Park School. Her middle school students collected the history of the Central community by taking pictures, researching the heroes and â&#x20AC;&#x153;sheroesâ&#x20AC;? of the community, learning about their accomplishments and recording the oral history of residents who still live in the neighborhood.

Gray From 1 achieve the greater vision of a stadium that is not just built for the people but by the people as well. Best Value procurement could be one positive solution to the participation goal challenges of the past if the authority adds overall impact to the community in its consideration. MUL is currently aligning a for-profit relationship that could help the stadium authority and the EAF meet the goals for procurement and hiring right

The students put together all the information into a sketch that told a story of the Central community. The project began with a series of community painting workshops at different locations throughout the Central community. Organizations such as WE WIN Institute, the Youth Farm and Pillsbury House, invited neighbors from Central to share food, meet neighbors and to paint together, what will be the largest mural in the Central neighborhood. Lead artist Gretchen McClain, in partnership with Minneapolis Community Education, the Minneapolis Public Schools and neighborhood organizations, employed a unique procedure that does not paint directly on the wall, but uses an indirect parachute cloth method developed by the Philadelphia Mural Arts Program. Until now the technique was never used before in a Minneapolis community mural project. Using a lightweight synthetic material, the mural design will be portioned into various sections to be painted at the different community art workshops and to out the gate for the demolition portion of the contract. Hereâ&#x20AC;&#x2122;s what our partnership is committed to do: Create nearly 60 jobs for women and people of color Train a minority owned firm to grow their scope of business in demolition Train MUL in deconstruction so that it could start a potential enterprise in large deconstruction and invest some of the profit margin for a future MUL venture Hire union workers that earn $23 an hour Pursue more projects like the stadium in the future In order for the Vikings

later be installed on the building. The project also includes apprentice artists who have learned the technique, so they too can create lasting murals throughout Minneapolis.

McLain has 10 years of mural experience and she has traveled the world including Europe and South America studying new and traditionalistic mural techniques. In addition

to making many murals throughout the Twin Cities, she has created murals in Argentina, Mexico, France, Memphis and Philadelphia. At the end of August, the

mural will be installed on the side of northwest corner of Green Central Park School on 35th Street. In September, the community will come together to unveil the mural.

Stadium and other public projects to hit their aggressive minority participation goals, the bid should consider the added value provided by minority workforce participation and training. Other ways to create innovation that can be modeled into the future: Increase training dollars so more individuals can be prepared and trained for work Encourage innovation in RFP that gives bonus points to projects that commit to 32% workforce goal and procurement goal Encourage large contractors to partner with women and

minority contractors similar to MULâ&#x20AC;&#x2122;s proposed project In June, in what the Pioneer Press labeled the â&#x20AC;&#x153;Tom and Tom Show,â&#x20AC;? retiring Minnesota State Economist Tom Stinson and retired State Demographer Tom Gallaspy both warned that investment in equipping minorities with the tools needed to be successful is critical in light of retiring baby boomers, shifting demographics, and the reality that heavy investment in early childhood programs will not pay off for 12 to 15 years. Stinson commented â&#x20AC;&#x153;The challenge for the Legislature [is to] figure out how to do something for the short term,

with options that might include improved adult basic education and other efforts that get people into programs that make fullest use of their skills.â&#x20AC;? When I ponder these comments, consider the challenges that exist in our communities and the value of a proposal like the one outlined above, I contend that these commitments of training and developing people from the community, creating jobs that earn a living wage, and connecting our folks to long term opportunity are a great value not only to the workers, but to the city as well. Everybody wins in our proposal,

and there will be a notable social return on investment that clearly offers individual benefit and community impact The contractors that have responded to the MULâ&#x20AC;&#x2122;s proposal should be commended for supporting innovative ideas and for their commitment to providing a true â&#x20AC;&#x2DC;best valueâ&#x20AC;&#x2122; outcome for the Stadium project. The right play here could add to the success of the project and result in the highest level of minority participation in city history. Stay tuned for more information about MULâ&#x20AC;&#x2122;s participation in the stadium project.

Israeli film producer/director Noemi Schory to teach at the University of Minnesota Schory is heading to Minnesota as part of the Schusterman Visiting Israeli Artist Program, which brings Israeli artists to top colleges and universities in North America. The residencies help bring contemporary Israeli culture to a wider audience

Visit our booth at Urban League

New York â&#x20AC;&#x201D; Noemi Schory, a renowned Israeli documentary film director and producer, will bring her talents to the University of Minnesota for a residency this upcoming fall semester. On campus, Schory will be teaching a course, â&#x20AC;&#x153;The Holocaust in Film: Recent Israeli and German Documentaries,â&#x20AC;? which will trace the path of documentary representations of the Holocaust. In addition, Schory will also speak at the Jewish Community Centers in the area, Carleton College and other public venues. Schoryâ&#x20AC;&#x2122;s time at the University of Minnesota is made possible by the Schusterman Visiting Israeli Artists Program, an initiative of the Israel Institute that brings Israeli artists â&#x20AC;&#x201C; among them filmmakers, choreographers, musicians,

writers and visual artists â&#x20AC;&#x201C; or residencies at top universities and other cultural organizations in North America, with a focus on fostering interaction between the artists and the communities in which they are based. The goal is to expose a broader audience to contemporary Israeli culture. Schory is one of 10 visiting artists who will be in residencies throughout the country as part of the program, founded in 2008 by the Charles and Lynn Schusterman Family Foundation, which is part of the Schusterman Philanthropic Network. Schory founded Belfilms in 1988 as an independent production house active in Israeli and many international co-productions, primarily in the documentary field. In 2005, she was elected president of Input, the international public television conference. Schory also serves as a museum film director and producer for Yad Vashem, Israelâ&#x20AC;&#x2122;s official memorial for the Jewish victims of the Holocaust. She produced â&#x20AC;&#x153;A Film Unfinishedâ&#x20AC;?, a

documentary about the Warsaw ghetto in Poland, which received numerous awards worldwide and was an Emmy nominee after being screened on PBS in 2010. Her role as content advisor for the first commercial Israeli television has had a continuing impact on both film and television there. â&#x20AC;&#x153;What makes The Schusterman Visiting Israeli Artist Program unique and so effective is that it allows members of the host community and the visiting artists to connect in a variety of settings â&#x20AC;&#x201C; from formal to informal, Jewish to non-Jewish â&#x20AC;&#x201C;over a significant period of time, rather than the more traditional oneoff experience,â&#x20AC;? said Marge Goldwater, the programâ&#x20AC;&#x2122;s director. â&#x20AC;&#x153;As we look back on the first five years, we see that the success of the residencies has prompted host institutions to find ways to bring Israeli cultural leaders to their communities after the Schusterman artist has left.â&#x20AC;?

News for the week of August 26, 2013. Insight News is the community journal for news, business and the arts serving the Minneapolis / St. Pa...

News for the week of August 26, 2013. Insight News is the community journal for news, business and the arts serving the Minneapolis / St. Pa...