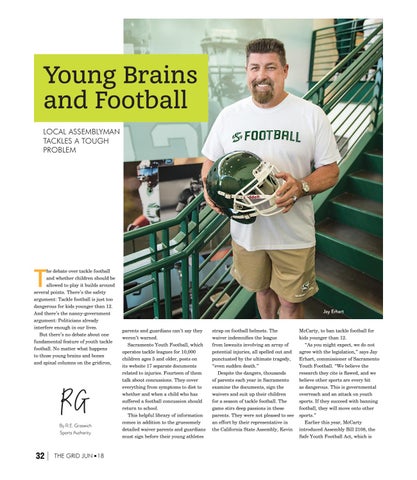 he debate over tackle football and whether children should be allowed to play it builds around several points. There’s the safety argument: Tackle football is just too dangerous for kids younger than 12. And there’s the nanny-government argument: Politicians already interfere enough in our lives. But there’s no debate about one fundamental feature of youth tackle football. No matter what happens to those young brains and bones and spinal columns on the gridiron,

parents and guardians can’t say they weren’t warned. Sacramento Youth Football, which operates tackle leagues for 10,000 children ages 5 and older, posts on its website 17 separate documents related to injuries. Fourteen of them talk about concussions. They cover everything from symptoms to diet to whether and when a child who has suffered a football concussion should return to school. This helpful library of information comes in addition to the gruesomely detailed waiver parents and guardians must sign before their young athletes

strap on football helmets. The waiver indemnifies the league from lawsuits involving an array of potential injuries, all spelled out and punctuated by the ultimate tragedy, “even sudden death.” Despite the dangers, thousands of parents each year in Sacramento examine the documents, sign the waivers and suit up their children for a season of tackle football. The game stirs deep passions in these parents. They were not pleased to see an effort by their representative in the California State Assembly, Kevin

McCarty, to ban tackle football for kids younger than 12. “As you might expect, we do not agree with the legislation,” says Jay Erhart, commissioner of Sacramento Youth Football. “We believe the research they cite is flawed, and we believe other sports are every bit as dangerous. This is governmental overreach and an attack on youth sports. If they succeed with banning football, they will move onto other sports.” Earlier this year, McCarty introduced Assembly Bill 2108, the Safe Youth Football Act, which is