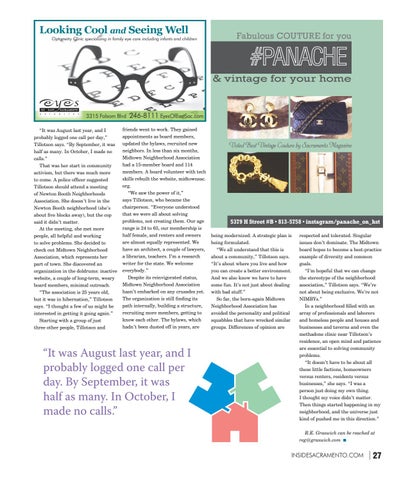 Fabulous COUTURE for you

& vintage for your home

3315 Folsom Blvd “It was August last year, and I probably logged one call per day,” Tillotson says. “By September, it was half as many. In October, I made no calls.” That was her start in community activism, but there was much more to come. A police officer suggested Tillotson should attend a meeting of Newton Booth Neighborhoods Association. She doesn’t live in the Newton Booth neighborhood (she’s about five blocks away), but the cop said it didn’t matter. At the meeting, she met more people, all helpful and working to solve problems. She decided to check out Midtown Neighborhood Association, which represents her part of town. She discovered an organization in the doldrums: inactive website, a couple of long-term, weary board members, minimal outreach. “The association is 25 years old, but it was in hibernation,” Tillotson says. “I thought a few of us might be interested in getting it going again.” Starting with a group of just three other people, Tillotson and

friends went to work. They gained appointments as board members, updated the bylaws, recruited new neighbors. In less than six months, Midtown Neighborhood Association had a 15-member board and 114 members. A board volunteer with tech skills rebuilt the website, midtownsac. org. “We saw the power of it,” says Tillotson, who became the chairperson. “Everyone understood that we were all about solving problems, not creating them. Our age range is 24 to 65, our membership is half female, and renters and owners are almost equally represented. We have an architect, a couple of lawyers, a librarian, teachers. I’m a research writer for the state. We welcome everybody.” Despite its reinvigorated status, Midtown Neighborhood Association hasn’t embarked on any crusades yet. The organization is still finding its path internally, building a structure, recruiting more members, getting to know each other. The bylaws, which hadn’t been dusted off in years, are

“It was August last year, and I probably logged one call per day. By September, it was half as many. In October, I made no calls.”

5379 H Street #B • 813-5758 • instagram/panache_on_hst being modernized. A strategic plan is being formulated. “We all understand that this is about a community,” Tillotson says. “It’s about where you live and how you can create a better environment. And we also know we have to have some fun. It’s not just about dealing with bad stuff.” So far, the born-again Midtown Neighborhood Association has avoided the personality and political squabbles that have wrecked similar groups. Differences of opinion are

respected and tolerated. Singular issues don’t dominate. The Midtown board hopes to become a best-practice example of diversity and common goals. “I’m hopeful that we can change the stereotype of the neighborhood association,” Tillotson says. “We’re not about being exclusive. We’re not NIMBYs.” In a neighborhood filled with an array of professionals and laborers and homeless people and houses and businesses and taverns and even the methadone clinic near Tillotson’s residence, an open mind and patience are essential to solving community problems. “It doesn’t have to be about all these little factions, homeowners versus renters, residents versus businesses,” she says. “I was a person just doing my own thing. I thought my voice didn’t matter. Then things started happening in my neighborhood, and the universe just kind of pushed me in this direction.” R.E. Graswich can be reached at reg@graswich.com n