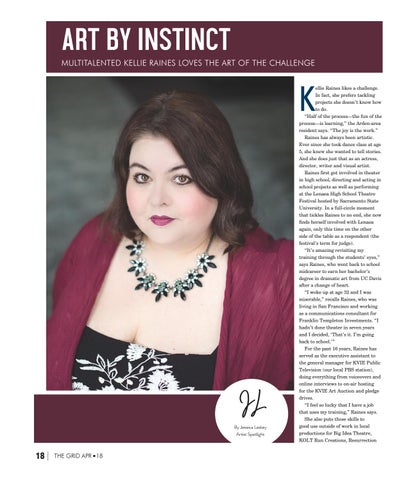 ellie Raines likes a challenge. In fact, she prefers tackling projects she doesn’t know how to do. “Half of the process—the fun of the process—is learning,” the Arden-area resident says. “The joy is the work.” Raines has always been artistic. Ever since she took dance class at age 5, she knew she wanted to tell stories. And she does just that as an actress, director, writer and visual artist. Raines first got involved in theater in high school, directing and acting in school projects as well as performing at the Lenaea High School Theatre Festival hosted by Sacramento State University. In a full-circle moment that tickles Raines to no end, she now finds herself involved with Lenaea again, only this time on the other side of the table as a respondent (the festival’s term for judge). “It’s amazing revisiting my training through the students’ eyes,” says Raines, who went back to school midcareer to earn her bachelor’s degree in dramatic art from UC Davis after a change of heart. “I woke up at age 32 and I was miserable,” recalls Raines, who was living in San Francisco and working as a communications consultant for Franklin Templeton Investments. “I hadn’t done theater in seven years and I decided, ‘That’s it. I’m going back to school.’” For the past 16 years, Raines has served as the executive assistant to the general manager for KVIE Public Television (our local PBS station), doing everything from voiceovers and online interviews to on-air hosting for the KVIE Art Auction and pledge drives. “I feel so lucky that I have a job that uses my training,” Raines says. She also puts those skills to good use outside of work in local productions for Big Idea Theatre, KOLT Run Creations, Resurrection