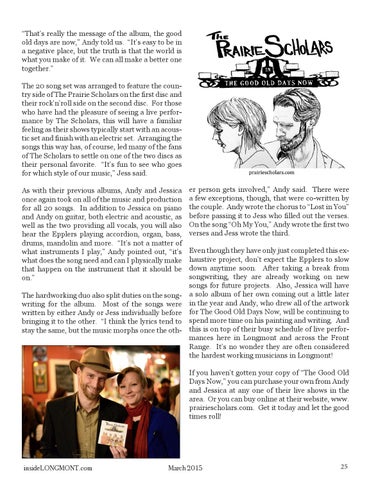 “That’s really the message of the album, the good old days are now,” Andy told us. “It’s easy to be in a negative place, but the truth is that the world is what you make of it. We can all make a better one together.” The 20 song set was arranged to feature the country side of The Prairie Scholars on the first disc and their rock’n’roll side on the second disc. For those who have had the pleasure of seeing a live performance by The Scholars, this will have a familiar feeling as their shows typically start with an acoustic set and finish with an electric set. Arranging the songs this way has, of course, led many of the fans of The Scholars to settle on one of the two discs as their personal favorite. “It’s fun to see who goes for which style of our music,” Jess said. As with their previous albums, Andy and Jessica once again took on all of the music and production for all 20 songs. In addition to Jessica on piano and Andy on guitar, both electric and acoustic, as well as the two providing all vocals, you will also hear the Epplers playing accordion, organ, bass, drums, mandolin and more. “It’s not a matter of what instruments I play,” Andy pointed out, “it’s what does the song need and can I physically make that happen on the instrument that it should be on.” The hardworking duo also split duties on the songwriting for the album. Most of the songs were written by either Andy or Jess individually before bringing it to the other. “I think the lyrics tend to stay the same, but the music morphs once the oth-

er person gets involved,” Andy said. There were a few exceptions, though, that were co-written by the couple. Andy wrote the chorus to “Lost in You” before passing it to Jess who filled out the verses. On the song “Oh My You,” Andy wrote the first two verses and Jess wrote the third. Even though they have only just completed this exhaustive project, don’t expect the Epplers to slow down anytime soon. After taking a break from songwriting, they are already working on new songs for future projects. Also, Jessica will have a solo album of her own coming out a little later in the year and Andy, who drew all of the artwork for The Good Old Days Now, will be continuing to spend more time on his painting and writing. And this is on top of their busy schedule of live performances here in Longmont and across the Front Range. It’s no wonder they are often considered the hardest working musicians in Longmont! If you haven’t gotten your copy of “The Good Old Days Now,” you can purchase your own from Andy and Jessica at any one of their live shows in the area. Or you can buy online at their website, www. prairiescholars.com. Get it today and let the good times roll! 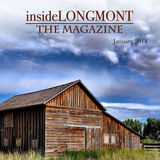 Inside Longmont The Magazine - March 2015

Inside Longmont The Magazine - March 2015