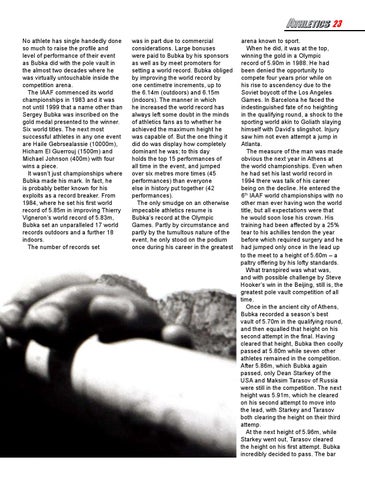 thletics 23 athletics No athlete has single handedly done so much to raise the profile and level of performance of their event as Bubka did with the pole vault in the almost two decades where he was virtually untouchable inside the competition arena. The IAAF commenced its world championships in 1983 and it was not until 1999 that a name other than Sergey Bubka was inscribed on the gold medal presented to the winner. Six world titles. The next most successful athletes in any one event are Haile Gebrsealassie (10000m), Hicham El Guerrouj (1500m) and Michael Johnson (400m) with four wins a piece. It wasn’t just championships where Bubka made his mark. In fact, he is probably better known for his exploits as a record breaker. From 1984, where he set his first world record of 5.85m in improving Thierry Vigneron’s world record of 5.83m, Bubka set an unparalleled 17 world records outdoors and a further 18 indoors. The number of records set

was in part due to commercial considerations. Large bonuses were paid to Bubka by his sponsors as well as by meet promoters for setting a world record. Bubka obliged by improving the world record by one centimetre increments, up to the 6.14m (outdoors) and 6.15m (indoors). The manner in which he increased the world record has always left some doubt in the minds of athletics fans as to whether he achieved the maximum height he was capable of. But the one thing it did do was display how completely dominant he was; to this day holds the top 15 performances of all time in the event, and jumped over six metres more times (45 performances) than everyone else in history put together (42 performances). The only smudge on an otherwise impecable athletics resume is Bubka’s record at the Olympic Games. Partly by circumstance and partly by the tumultous nature of the event, he only stood on the podium once during his career in the greatest

arena known to sport. When he did, it was at the top, winning the gold in a Olympic record of 5.90m in 1988. He had been denied the opportunity to compete four years prior while on his rise to ascendency due to the Soviet boycott of the Los Angeles Games. In Barcelona he faced the indestinguished fate of no heighting in the qualifying round, a shock to the sporting world akin to Goliath slaying himself with David’s slingshot. Injury saw him not even attempt a jump in Atlanta. The measure of the man was made obvious the next year in Athens at the world championships. Even when he had set his last world record in 1994 there was talk of his career being on the decline. He entered the 6th IAAF world championships with no other man ever having won the world title, but all expectations were that he would soon lose his crown. His training had been affected by a 25% tear to his achilles tendon the year before which required surgery and he had jumped only once in the lead up to the meet to a height of 5.60m – a paltry offering by his lofty standards. What transpired was what was, and with possible challenge by Steve Hooker’s win in the Beijing, still is, the greatest pole vault competition of all time. Once in the ancient city of Athens, Bubka recorded a season’s best vault of 5.70m in the qualifying round, and then equalled that height on his second attempt in the final. Having cleared that height, Bubka then coolly passed at 5.80m while seven other athletes remained in the competition. After 5.86m, which Bubka again passed, only Dean Starkey of the USA and Maksim Tarasov of Russia were still in the competition. The next height was 5.91m, which he cleared on his second attempt to move into the lead, with Starkey and Tarasov both clearing the height on their third attemp. At the next height of 5.96m, while Starkey went out, Tarasov cleared the height on his first attempt. Bubka incredibly decided to pass. The bar

The latest news and exciting features from the world of athletics 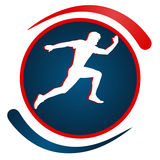 More from Inside Athletics